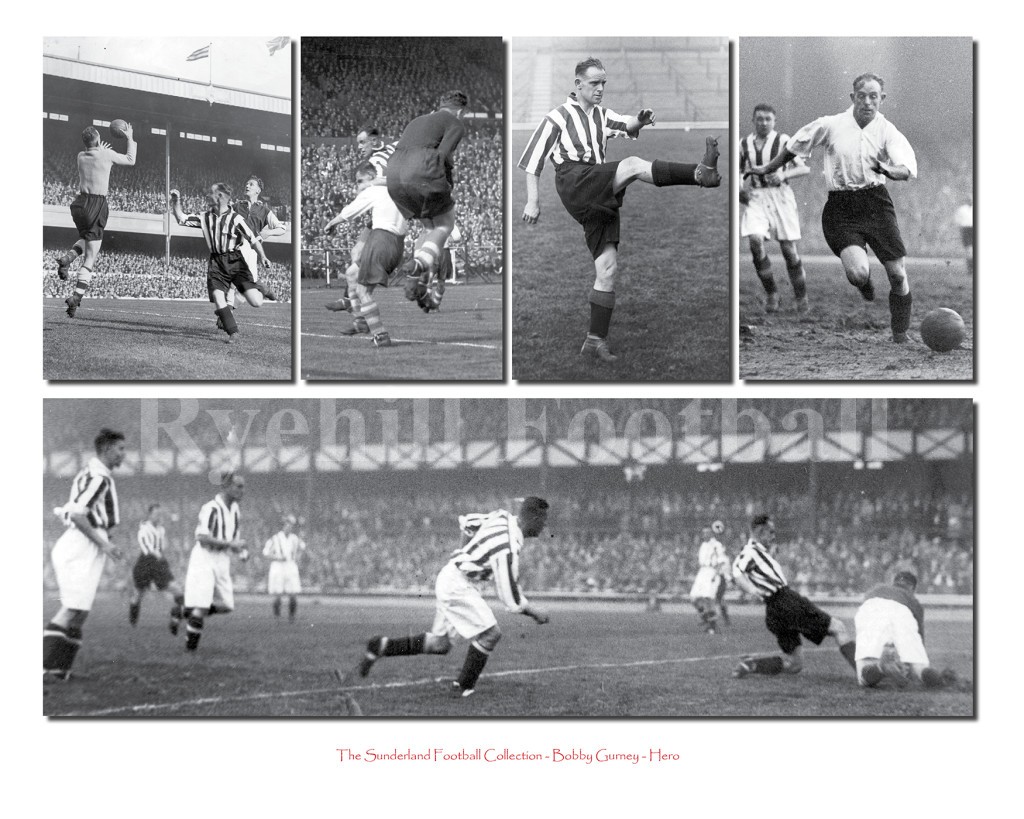 Gurney always knew that Cochrane wanted to replace him, to mould his own team.  In those days, such things weren’t spoken of openly, and on more then one occasion the Directors overruled the manager’s attempts to sell the local forward. To keep going under these circumstances takes a special type of player.

For Bobby Gurney though, Sunderland was his home club, his special club.  Born in Silksworth in 1907, he played for Hetton Juniors, Seaham Harbour and Bishop Auckland before signing for Sunderland in 1925.  After some prodigious goal scoring feats for the reserves, he made his debut at West Ham in April 1926, taking just 19 minutes to score the first of his 228 goals for Sunderland.  His home debut a week later saw Bobby score again, netting an 87th minute winner against Arsenal, and the local youngster became a first-team regular the next season.

However, the first of two broken legs kept him out of action for a year before he returned to first-team action with a vengeance, scoring his first hat-trick against Arsenal.  Bobby was to say later that, even at this time, he was still in awe of the senior Sunderland players; giants such as McInroy, England, Clunas, Parker and Andrews, and was afraid to speak to them except to say “good morning”.

To recount his goal scoring exploits season-by-season would become tedious.  Some special goals, though, do stand out.  Seemingly impossible ones scored with his back to goal or from the by-line.  Important ones like the last-minute equaliser against Wolves in the Cup in 1937.  Or his five goals in a 7-4 win against Bolton, equalling the record of Jimmy Millar and Charlie Buchan.

By this time, of course, the great Sunderland side of the 1930s was complete, and clinched the League title in 1936 with a 7-2 win at Birmingham in which Bobby scored four times. Gurney reckoned that the half-back combination of Thomson, Johnston and Hastings turned the Sunderland team into a goalscoring force and said that it would have been impossible to play badly with Raich Carter, Jimmy Connor and Patsy Gallacher alongside you. Connor and Carter repaid these tributes, highlighting Gurney’s skills in creating space, reading the game, always being available to receive the ball and, with great regularity, to put it in the net.

Though he did play in several trials, Bobby Gurney’s skills were, however, only recognised once at International level.  Apart from a few wartime games, Bobby Gurney’s Sunderland playing career ended with a fracture of the right fibula in the FA Cup against Blackburn in February 1939.  He sustained the injury in the second minute, but typically returned to the field before being taken off at half-time. By that time however he stood top of the clubs all time scoring list.

After he finished playing, Bobby Gurney stayed in the game as a coach and manager into the 1960s, although he never achieved the same heights as he did whilst a player.  He remained in the North-East until his death in 1994 and will be remembered as one of the Sunderland all time greats.  At other clubs he would have been the greatest and it’s a tribute to the supreme talents of Raich Carter and Charlie Buchan that they arguably push Gurney into third place in the list of the clubs all time greatest players.