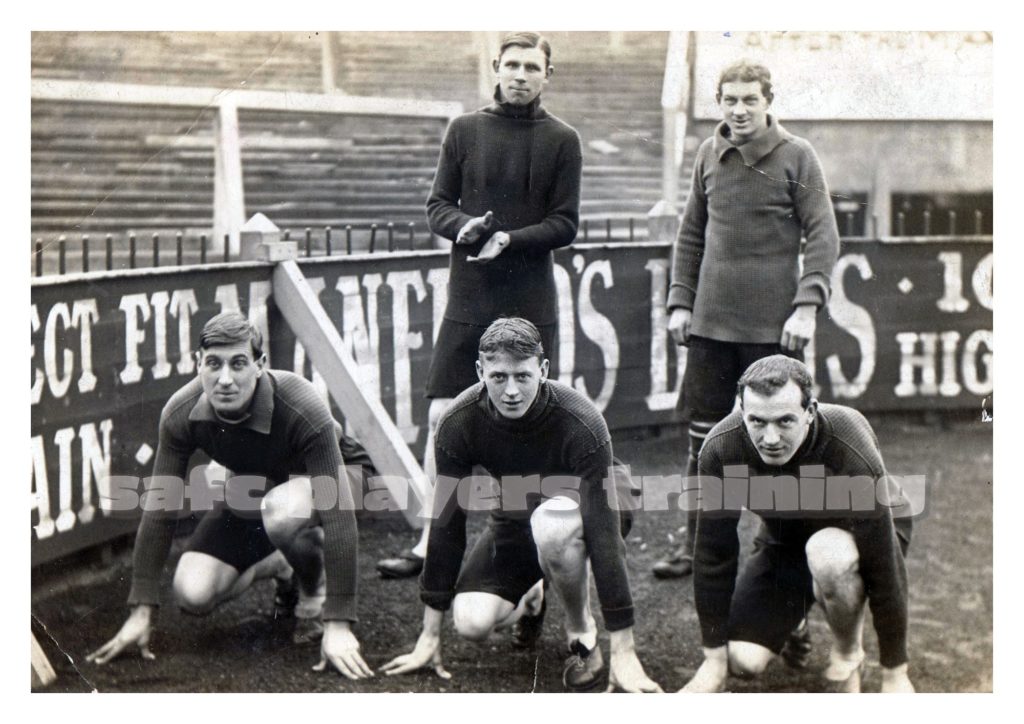 George Holley was born in Seaham Harbour on 25th November, 1885 and according to the 1891 census, George was the youngest of five children to his father, George; a cockney and his Mother, Catherine, a Scotswoman. His father was a fireman at the local bottle works. George’s family lived at 2 Fenwick Row, Dawdon in Seaham Harbour.

He debuted for Seaham Young Villa in 1899 before moving onto Seaham Athletic, then Seaham Villa; playing for Seaham White Star before joining Sunderland in 1904. At the time Sunderland’s leading goalscorer was Alf Common but in February, 1905, Middlesbrough, who were in danger of being relegated from the First Division, purchased him from Sunderland for the record breaking fee of £1,000.

One journalist described the transfer of Common as “flesh and blood for sale”. Another sports writer wrote: “We are tempted to wonder whether Association Football players will eventually rival thoroughbred yearling racehorses in the market.”

The nineteen year old Holley had already been scoring plenty of goals for the reserves and was expected to be an able replacement for Alf Common. Playing at inside-left, Holley soon became the club’s top goalscorer.

Typically Holley scored on his debut for Sunderland in December 1904 away at Sheffield Wednesday after just 10 minutes with a “lightning shot”. Four days later he scored again in his second outing, a 3 v 2 defeat of Preston North End at Roker Park.

In January 1908 Sunderland signed Leigh Roose. He was brought in to replace Teddy Doig who had moved to Liverpool. Holley and Roose became close friends. That season Sunderland finished 3rd in the First Division of the Football League. Local rivals Newcastle United won the title with 53 points; however, Sunderland had the satisfaction of beating Newcastle 9-1 at St. James’ Park in December 1908 with Holley scoring a hat-trick.

Holley won his first international cap against Wales on 15th March 1909. Other players in the England team included Bob Crompton and Colin Veitch. His Sunderland team-mate, Leigh Roose, was in goal for Wales but could not stop Holley scoring after 15 minutes. Holley scored five goals in five internationals that season. Surprisingly, he was dropped from the team after failing to score in the first game the following season.

All in all Holley made 10 international appearances and toured South Africa in 1910. He also represented The Football League, The North, an England XI v a Scottish XI in 1918 and played for the Professionals against The Amateurs in the 1913/14 Charity Shield. In the latter game, played at The Den, home of Millwall, the professionals won 7 v 2 with Holley scoring twice.

Holley continued to score plenty of goals for Sunderland and ended up as the First Division joint leading top scorer in the 1911-12 season with 25 goals. He also won back his place in the England team and scored in all three games he played in the 1912 Home Nations Championship.

Sunderland won the Football League First Division championship in the 1912-13 season. Holley’s goals made an important contribution but unfortunately he was not fully fit in the FA Cup Final that season when the team lost 1-0 to Aston Villa.

WW1 of course interrupted Holley’s career on Wearside, although he did play football during this period for South Shields.

Holley made his last Sunderland appearance on 31 August 1918, a National War Fund game against Newcastle United at St James Park. Typically he signed off his Wearside career with two goals in a 4 v 0 win.

In June 1919 Holley left Wearside and finished his professional playing career with Brighton and Hove Albion, The Seagulls signing George for the sum of £200 in July 1919.

Holley had previously worked as a plater at Messrs. Dickinson’s Engine Works in Sunderland and he became a very experienced coach/trainer, after he hung up his boots.

He was appointed trainer to the Sunderland AFC players on 8 January 1921, and although the game ended on a 0 v 1 defeat by Cardiff City in the FA Cup third round at Roker Park, the Sunderland Echo commented, “that the directors intend to bring about a change for the better in the quality of play is indicated by the engagement of George Holley as club coach”.

George Holley passed away on the evening of Thursday 27 August 1942 at New Cross Hospital in Wolverhampton aged 56 after a six year illness. His health had deteriorated rapidly in the preceding weeks. At the time he was living at 447 Cannock Road in the town and was survived by his wife Mary Holley (nee Lightfoot), three sons and a daughter, and was interred at Wolverhampton Cemetery on Tuesday 1 September 1942.

His passing made all of the major newspapers of the day, including of course The Sunderland Echo, who described Holley thus: “Probably no other Sunderland player of his day is still remembered by football enthusiasts of Roker Park with such feelings of attachment as George Holley. He was a product of Seaham White Star and he and Arthur Bridgett became one of the most famed and dangerous left wings in the country”.

Argus went further, in his Saturday 29 August 1942 obituary, when he said of Holley; “So far as I am concerned I class George as the best forward that Sunderland has ever possessed this century. I will simply say that George Holley was a shining star”.

George Holley is still, to this day, Sunderland AFC’s fourth top goalscorer of all time (Gurney, Buchan and Halliday are the top 3) with nine hat tricks to his credit and he scored four goals in a competitive fixture, twice, for SAFC (v Manchester United in 1912 and v Bury in 1911). In all he notched 158 goals in 315 professional appearances for The Black Cats.

His tally is all the more remarkable for the fact that in all of his first class games his goals total only included three penalties.

Perhaps we should leave the last word to the iconic Charlie Buchan, who in his 1955 autobiography “A Lifetime In Football” commented:

“In a later game, I played against Bradford City at Valley Parade. Only the previous April, City had won the FA Cup. They were a grand side, but we beat them and I have never seen a better exhibition of inside-forward play than that given by George Holley, our inside-left.

He scored a magnificent hat-trick, running nearly half the length of the field each time and coolly dribbling the ball round goalkeeper Jock Ewart before placing it in the net.

Several times I have stood on the field spellbound, watching Holley bewilder the opposition. After one game, manager Bob Kyle said to me, when I went in to draw the weekly wage-packet: “Do you think you’ve earned it?”

There was another occasion a year afterwards when I scored five goals against Kenneth Campbell, Scottish international goalkeeper then playing for Liverpool. Four of them I just touched into the net. Holley had beaten the defence and even drawn Campbell out of position before giving me the goals on a plate”.

As time passes the memory of George Holley fades into obscurity but in the near 140 year old history of Sunderland AFC this Seaham lad, similar to Gary Rowell, another product from that town, remains a towering figure.

George Holley is a Sunderland AFC great and his name lives on in the annals of SAFC. He is our Shining Star.

Footnote: George Holley’s son, Tom, went on to play professional football. A towering centre-half he served Leeds well for nearly 15 years. He started with one of dad George’s old clubs – Wolves – as a schoolboy, then joined his father’s other club – Sunderland – as an amateur but never made the first team for either. So he went to play for his father at Barnsley where he made a name for himself in a 3 year stint before joining Leeds in the close season of 1936.