Sunderland Football Club was officially wound up on 7 July 1896 and a limited liability company formed. A share prospectus was issued to interested parties to raise capital for the entity’s substantial ambition. In a modern world where football means money this document is perhaps one of the most important ever issued by SAFC. Below is a copy of the actual prospectus that was issued and a transcript of the actual meeting that took place to ratify the change in status: 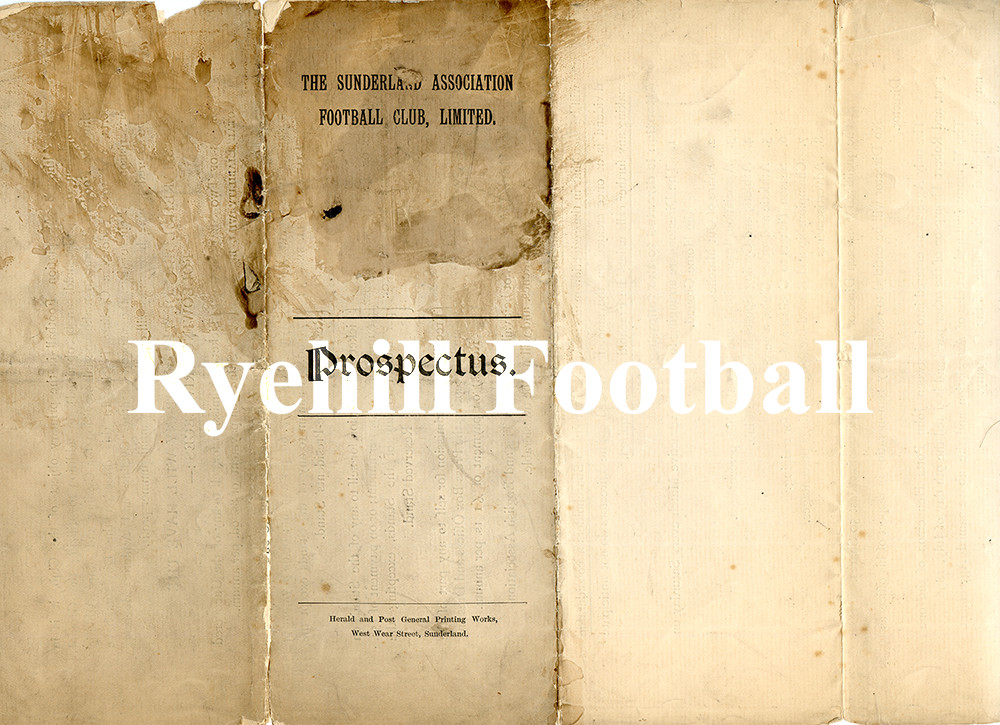 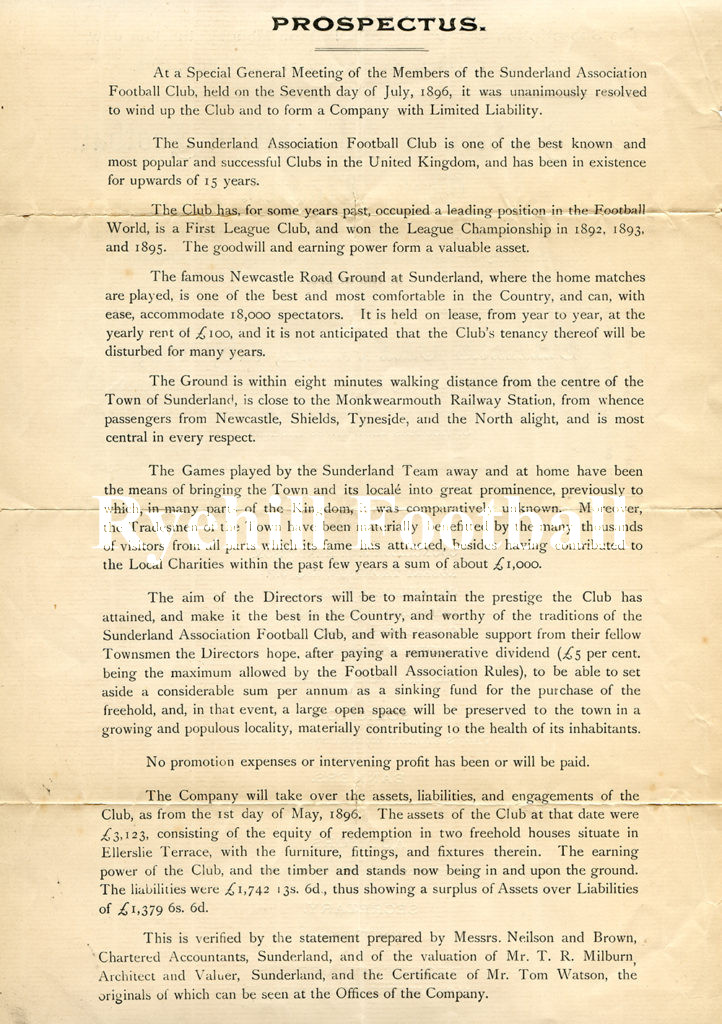 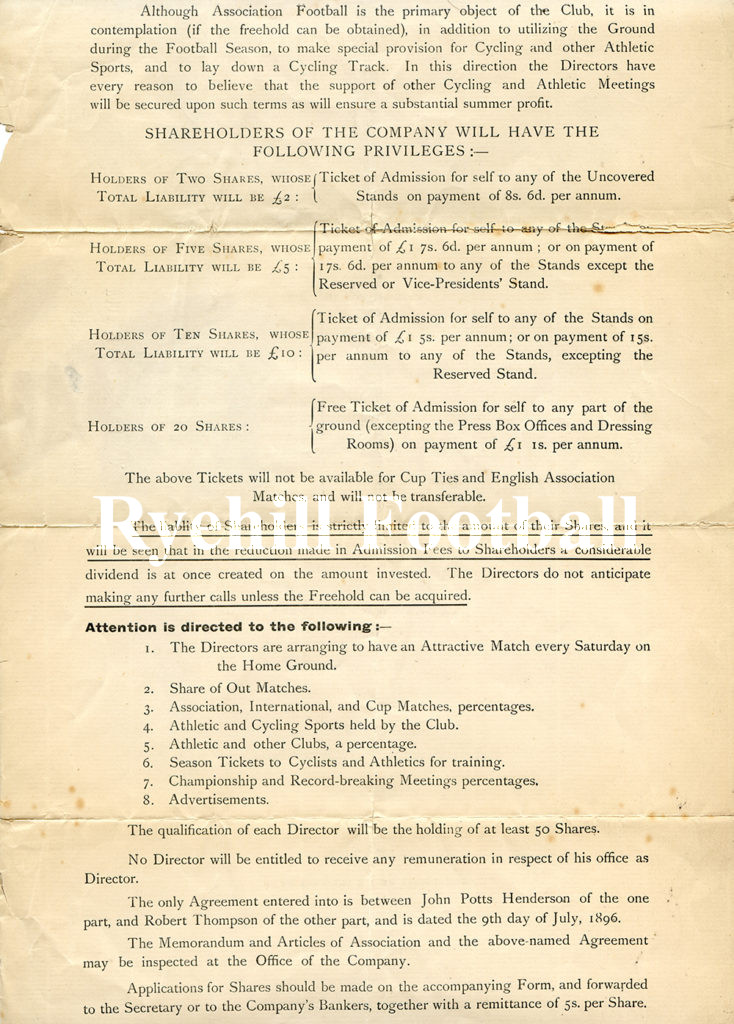 A public meeting was held in the Assembly Rooms Fawcett Street on 9th July 1896 to consider the financial position of the Sunderland club. Councillor J.P.Henderson was in the chair and said at the outset that the meeting was to put before them the prospectus for the proposed limited liability company in connection with Sunderland Football Club.

As they were all aware the team did not do as well last season as they had done in the years since the club entered the league. Practically a new team had to be assembled and through the generosity of Mr Thompson and Mr Tyzack they now had a first class side. As time went on however these gentlemen found they could not give as much time to the club as they desired and had therefore made a present of the debts that they were owed by the club.

During the close season the players wages still had to be paid and from the end of one season until the beginning of the next evereything went out and nothing was coming in. This resulted in a debt of £800 to £1,000 being incurred. That had to be paid of during the next playing season and as a rule the club had generally cleared that liability by Christmas. This sort of thing  was bound to come to an end and with the first bad season they had and then this last season they could not clear off the £1,000 debt incurred during the summer of last year.

They expected the Company would be a success and with the £1,000 debt incurred during the summer time paid off they could start the new season free of debt. If this £1,000 had not been cleared off year by year the current financial position would have been very poor indeed. Last season the difference in takings between the home attendances and those of the previous year amounted to £1,450. This is a large drop in revenue over a season and was purely down to people not coming to see the team play.

In the prospectus of the company they would find the names of the provisional directors who were all members of the old committee. These gentlemen were willing to serve as directors again.. At the meeting when the allotment of shares would take place they would all resign and submit themselves for re-election. Any gentleman who took the necessary number of shares to qualify would be eligible for election. The qualifying number of shares to be a director was 50.

In the articles of the association the provisional directors had made provision for the laying down of a cycle track if the club so desired. There had been some sports in Sunderland recently and there was a great furture for cycling in the town if a reasonable track was provided. If the company was floated the directors would endeavour to lay a suitable track which would be a great source of income during thew summer months. They proposed to call up £5,000 at half pay at present and the remaining £2,500 would be available for athletics later on.

Mr R. Thompson JP who was heartily received said he was sure from his association with the football club that it was beneficial to the town and should contine in every way. The forming of the club into a limited company would give the people of the town a chance to share in its management. They must not think that the committee had taken this course of action lightly or that they were afraid of the future but it required time and thought to arrange the affairs of the club and they were not as young as they were. (laughter)

He was prepared to to take shares and so was his brother  who was out of town at present. After 15 years working the club had liabilities of £1,742 while assets were considerably more than that. Surely now that there was a fair prospect of a return on their money the public would take up the shares and successfully float the club as a limited company. He himself was prepared to lose his guarantee if only th club could survive. The guarantors were prepared to take up shares and it was now for the general public to show how much they appreciated what they had done in the past.

Councillor J.T.Calvert also sincerely hoped the club would not fold for should this happen it would be a great misfortune for the town. As to the new company although it was not the very best speculation for profit at present he was convinced it was at any rate a good investment. He was assured that there was a bright future in store for the club.

The Chairman indicated at this stage that the directors would take up £50 of shares each at present and if necessary were prepared to increase that number.

Mr Tom Watson said it would be a disgrace to the town if the club ceased to exist as it would be the first club in the first division that had become defunct. Last year the Sunderland committee had set their minds on winning a certain thing which had not come off (Laughter) but the team that put Sunderland out of the English Cup by the odd goal afterwards beat Everton 4-1 and eventually went on to win the trophy. This suggested that Sunderland’s performance was not that bad.

The Chairman informed the meeting Mr Watson and another gentleman were going to canvass the tradesmen of the town to see how many shares they would be prepared to take up. He expressed the belief that the whole issue would be quickly taken up and there being no other business the meeting was concluded.