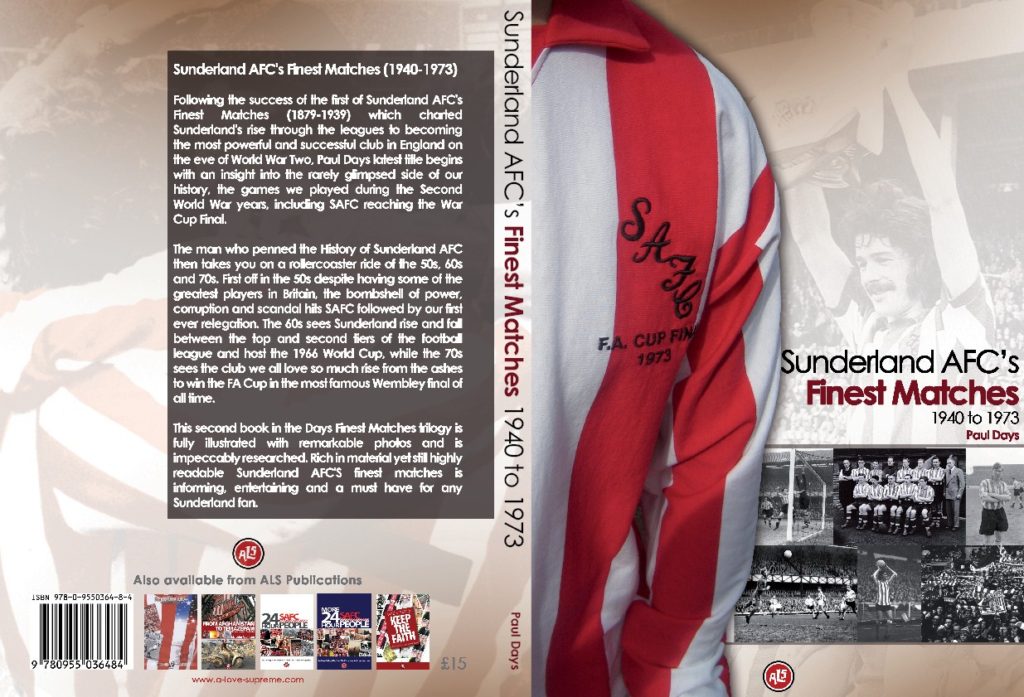 In the eagerly anticipated sequel to Finest Matches 1879 to 1939, the latest instalment takes in the clubs activities from the War Years through to FA Cup triumph in 1973. Just £7.50 plus £3.50 postage and packing.

Read perhaps the most comprehensive account ever given of Sunderland AFC’s through the war period, including the cult War Cup Final where the red and whites take on Wolves in a two legged final with our fans strafed by the Luftwaffe on their way to the Midlands.

Sunderland’s last great era? Take in the clubs exploits reaching FA Cup semi finals, just missing out on the league title with legends such as Shackleton plying their trade for the Wearsiders. Read how the club imploded with an Illegal Payments Scandal that rocked the world of football and smashed the principle of a maximum wage.

Examine the club’s exploits throughout the swinging 60’s as a first promotion is supplemented by hosting the 1966 World Cup at Roker Park and the club being re-badged as The Vancouver Royal Canadians for one barmy North American Summer. Be sucked into the events surrounding the legendary FA Cup tie in 1964 against Manchester United as up to 100,000 people caused mayhem in and around Roker.

Early decade struggles give rise to a fairytale FA Cup win over a Leeds United side packed with international stars. The Roker Roar re-ignites Wearside as Sunderland go from 100 to 1 outsiders to defeat all comers in the world’s most prestigious domestic club knockout competition. Read comprehensive match reports of all the games in the cup run with full team details.

All told through match reports, comprehensive fixture lists chronicling long forgotten friendlies and testimonials, season narrative and of course, as you would expect, some marvellous and never before seen images of the clubs players in action and pre season team shots.