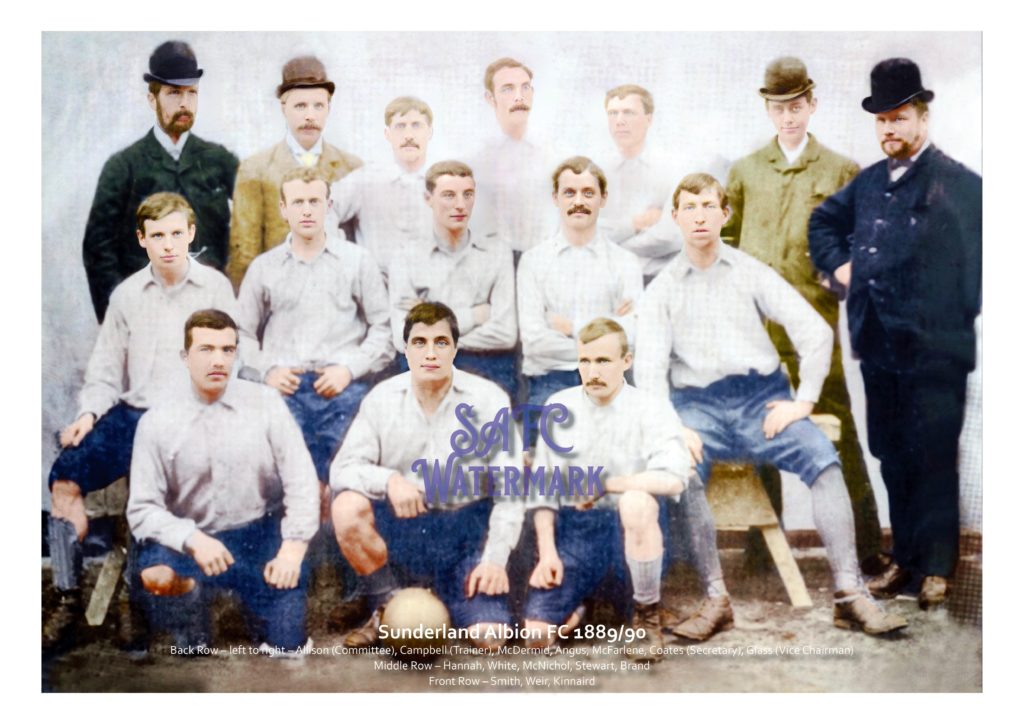 The Founding of Sunderland Albion in 1888 was controversial. In fact it was so controversial that The Sunderland Echo never wrote about the clubs formation. There were 3 main reasons for that (none of which showed SAFC up in a very good light), which will be detailed in a new book that is currently being written on the formation of The Albion club. It was as though Albion simply appeared out of thin air.

Sunderland Albion’s first game on 5 May 1888 was against the miners of Shankhouse Black Watch from Northumberland and it was played at The Ashville Ground. Albion would win 3 v 0. Shankhouse Black Watch were formed in 1883 by Black Watch soldiers, who were camped near Shankhouse Colliery (on the current A189 near Cramlington). They wore an all black strip with a red diagonal band running across their chests, from right shoulder down to left waist and their claim to fame at this point had been an encounter with Aston Villa in the 1887/88 English Cup at St James Park, a game that Shankhouse lost 0 v 9, following a 2 v 0 win at Darlington in the third round.

It was Sunderland Albion’s one and only game at Ashville prior to locating to Sunderland AFC’s former and first ground at the Blue House Field at Hendon.

We assume that Albion chose The Ashville Ground for its first game as the ground at Hendon was not ready to host the team, Ashville was already in use as a functioning football field and, playing devils advocate, it was close enough to the Newcastle Road Football Ground to remind Sunderland AFC that Albion were up and running.

Sunderland AFC’s Newcastle Road ground was the former Monkwearmouth CC ground. The current Wearmouth CC is of course next to Southwick and just over the road from Thompson Park.

The Ashville Ground was the home of Ashville AFC, formed in 1885. The club would go defunct sometime in 1895 and would become known as White Star Juniors. Ashville itself was an area of Sunderland approximately 400 yards up from the Newcastle Road football ground and would eventually be built on to create the Monkwearmouth Hospital. We have not done enough research to determine why the area was known as Ashville although we have reached out to Phil Curtis at The Sunderland Antiquarian Society for his opinion. Therefore this article may be updated should we find out anymore detail.

In the Sunderland Daily Echo, 5 November 1886 edition, it describes the location of The Ashville Ground as follows: “at Newcastle Road, in the field behind Eden Place” (there is no Eden Place anywhere near Newcastle Road football ground and all of the adjoining streets are named in various OS Maps); and a similar description is used on 13 February 1888 for the game between Palmers Hill and North Sands Shipyard Rovers (see below). The Ordnance Survey map of Sunderland from this period does not show Eden Place (not all of the street names are included) however it does name Eden Street, which would become Bertram Street and is in Ashville. It was in the district of Fulwell and almost equidistant between Newcastle Road football ground and The Windmill; Ashville was near to The Grange.

The map below quite clearly shows where Ashville was and how far it was from the Newcastle Road Ground. Having spoken to Statcat about this issue we are agreed that the football ground was probably just above the number 109 you can see in the map below. 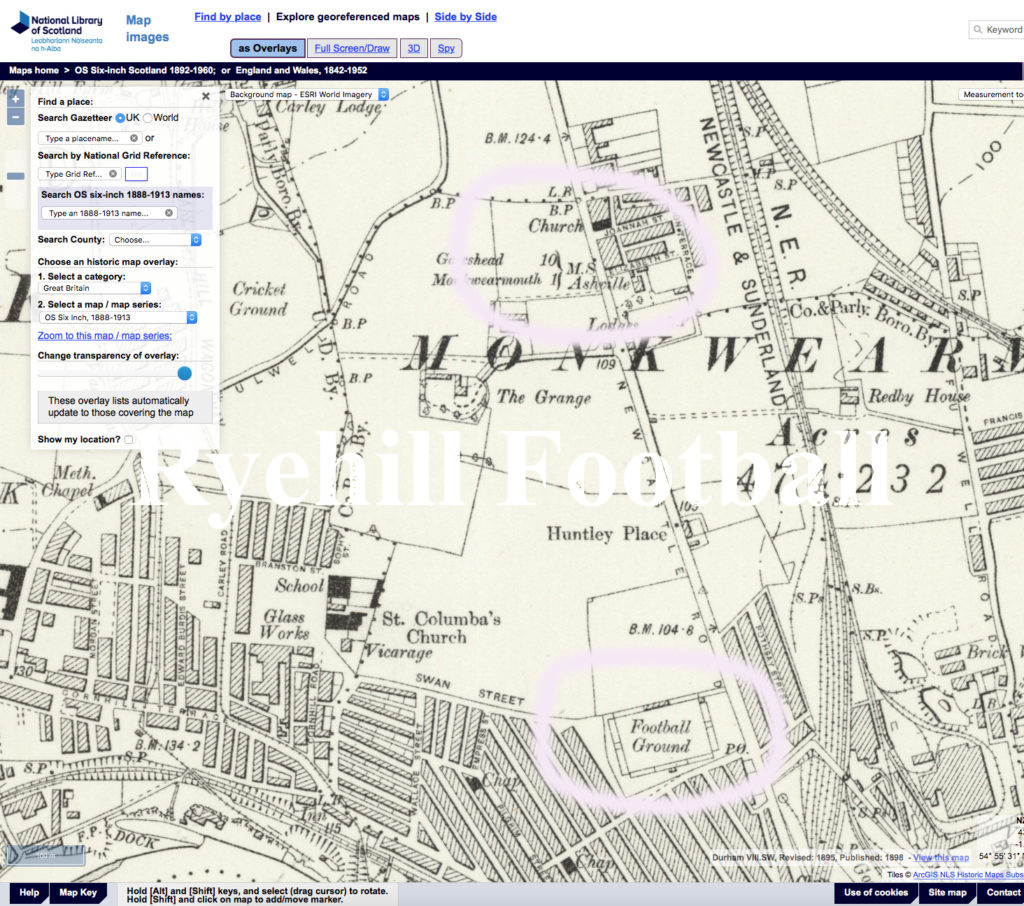 Ashville hosted a number of games not involving Ashville AFC, including for example, the November 1887 encounter between Southwick Butchers and the (Cocoa’s) Sunderland Butchers. Indeed Southwick Butchers would play more than one game at Ashville, including against Hendon Butchers in February 1887. For the record, Southwick was the adjoining Ward to Fulwell.

Given that Sunderland AFC tried to get Sunderland Albion’s first game against Shankhouse stopped it is not plausible that SAFC lent Sunderland Albion their ground for this match which is more evidence of Newcastle Road football ground not being “The Ashville Ground”.

Furthermore the various editions of the Sunderland Echo inform us that when Sunderland AFC were playing home games at Newcastle Road there were occasions when both the Ashville AFC first and second teams were playing at home as well. It is surely not possible for 3 games of football to have taken place at one venue on the same day and indeed why would Sunderland AFC, given their status and just months away from being elevated into the Football League, share their ground with another team?

The Ashville Ground sounds like no more than a football field and is not marked on the OS map above. Neither is the St Peter’s ground in Fulwell but we know that to existed as it is mentioned in the Sunderland Echo 7 March 1887 edition when Ashville AFC visited to play St Peters in the Charity Medal Competition, Second Round.

The St Peter’s we know today is next to the Stadium of Light and in, what was, the Monkwearmouth Ward next to the then pit.

On Saturday 14 April 1888 the Shields Daily Gazette reported upon the very first floodlit game in the North East region and possibly one of the first in the world. The game, the previous night, between Palmer’s Hill FC and North Sands Rovers (referenced above), played on The Ashville Ground, Newcastle Road, Sunderland used ten “Wells Light(s)” to illuminate the pitch.

The sides included a liberal sprinkling of current and former Sunderland AFC players, including Kirtley, Monaghan, Kilpatrick, Hastings, Potts, Dale, Moore, Rooney, Davison and Gloag. Each light had 4,000 candle power. The game played over two halves of thirty minutes was very well attended and judged to be a great success. The game incidentally resulted in a 2 vs. 2 draw. James Allan acted as one of the umpires. The game was separately reported upon in the 20 April 1888 edition of The Newcastle Courant and The Sunderland Echo on 14 April 1888.

A Wells Light was a large paraffin-fuelled (kerosene) blowlamp used for engineering work, particularly for illumination, in Victorian times. At a time before widespread electrical lighting, they were the most common form of high-powered portable illumination used for construction work, particularly railways, civil engineering, shipyards and ironworks. One of the local agents for Wells Lights in the North East were Messrs Emley & Sons of Newcastle.

Floodlighting in association football dates as far back as 1878, when there were floodlit experimental matches at Bramall Lane, Sheffield during the dark winter afternoons. With no national grid, lights were powered by batteries and dynamos, and were unreliable. Lights were later be used by clubs such as Thames Ironworks, but they stopped the practice after joining the Southern League in 1888.

For noting the Echo also mentions an Ashville Cricket Club and we know that it was associated with the football club as there is a report on 28 june 1887 of Newcastle Press travelling to Ashville for a game of cricket, only to find that the field was double booked and a football match involving Ashville AFC taking place.

The history of the football grounds that Sunderland AFC has played at have been poorly researched and recorded and at some point that will have to be rectified. However that project is for another day.

For now we are able to explode another SAFC myth; similar to the founding date of the club. As we know, history is rewritten every day, as new information comes to light. Sunderland AFC is no exception to that rule and its history continues to be rewritten by the small and dwindling band of SAFC historians; even though at times the football club refuses to accept its revised story.