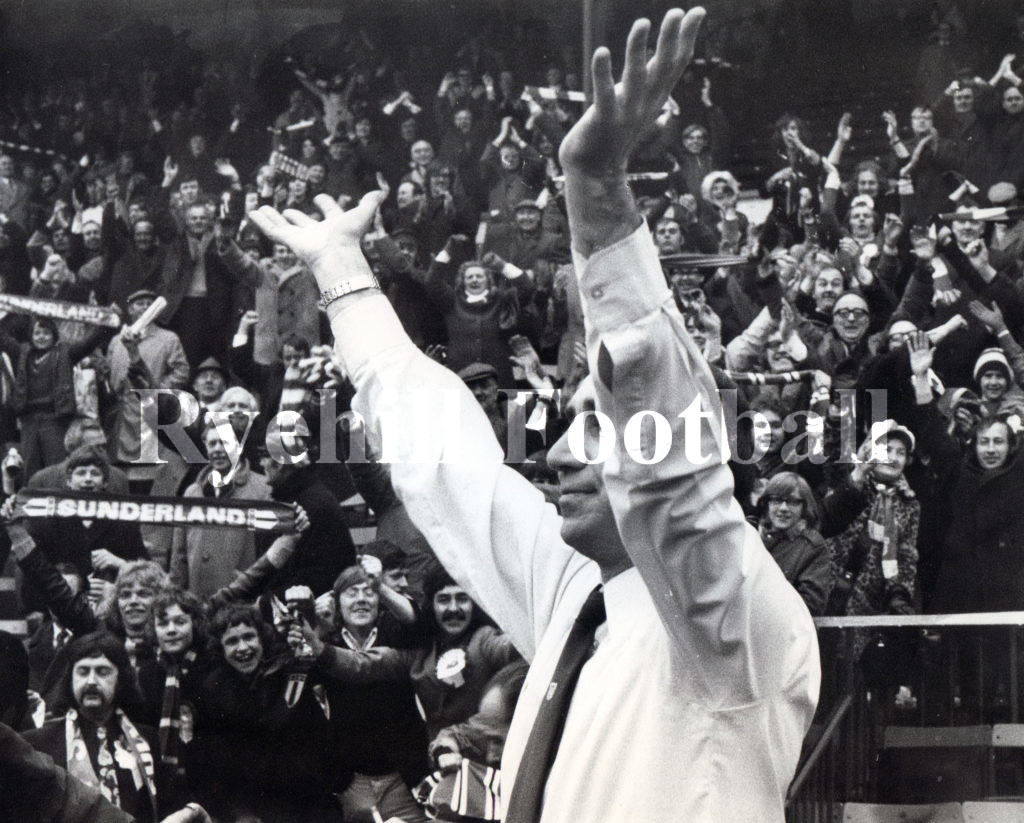 “I should pack it all in; there will never be a moment like it”.

On the 47th anniversary of Sunderland’s heroic and iconic 1973 Wembley FA Cup triumph Ryehill Football thought it appropriate to remember the man indelibly linked with that run and ultimate success. Whilst one of the abiding memories of the run to Wembley came after the semi final win at Hillsborough where Stokoe came out to salute the crowd, and make his now legendary statement, it is perhaps fitting to leave the ultimate accolade to two of British football’s most revered writers, who wrote the following obituaries following Stokoe’s death in 2004.

Think of Bob Stokoe, who has died aged 73, and an indelible image comes to mind. It is Wembley in May 1973. Against all the odds and expectations, Second Divison Sunderland have just beaten mighty Leeds United 1-0 in the FA Cup Final, and on to the pitch, overcome by irrepressible joy, runs Stokoe, in his familiar trilby hat. He had many satisfactions in his long career as the Newcastle United centre-half, and manager of a string of clubs, but this surely was the high point.

Stokoe was born at Mickley, Northumberland, and joined nearby Newcastle. He made his debut as a centre-forward against Middlesbrough – he was an emergency choice – on Christmas Day 1950. Standing just under 6ft and weighing just over 11st, he was no giant, but prevailed with his quick anticipation and prowess in the air. Altogether he made 288 appearances for Newcastle.

For a time, he was switched to right-half, but it was at centre-half that he won an FA Cup Final medal of his own, when, having succeeded the big Scottish international Frank Brennan in that role, he was a member of the Newcastle team that beat Manchester City 3-1 in 1955.

After that, Stokoe had a spell with Hartlepool, before beginning his long managerial career at Bury. There he stayed from 1961 to 1965, scorning, as he once revealed, the offer of a bribe from the late Don Revie, then the Leeds United manager, to lose a match.

Sunderland’s victory in that 1973 final made them the first Second Division team to win the trophy since West Bromwich Albion in 1931, but their achievement was much the more remarkable. Not only were they facing a Leeds team that had dominated English football with its galaxy of stars, but where West Bromwich had been about to rejoin the First Division, Sunderland rose to victory from deep in the Second Division. It was their first FA Cup triumph since 1937, when they beat Preston North End.

One of the ironies of the match was that the Sunderland goalkeeper, Jim Montgomery, who could seldom have handled the ball so ineptly, was destined to make one of the finest saves ever seen in a Cup Final. This when a ferocious shot, close in, from the formidable right foot of Leeds’s Scottish international right-winger Peter Lorimer was somehow turned by Montgomery on to the Sunderland bar.

Territorially, and perhaps inevitably, Leeds had much the better of the exchanges, but it was to Stokoe’s credit that Sunderland showed such uncompromising grit. Oddly enough, it was what seemed to be an error by little Bobby Kerr, the Sunderland midfielder, which led to the goal.

Electing to shoot from 30 yards, rather than pass to the unmarked Vic Halom on his right, he saw the Leeds keeper, Harvey, cautiously turn the ball over the bar. Hughes took the corner, Halom flicked the ball on, and with the Leeds defence in confusion, Ian Porterfield calmly brought it down and scored with his supposedly weaker right foot.

In the 1975-76 season, Sunderland won the Second Division title with 56 points and returned to the top division. Stokoe managed Rochdale in the 1979-80 season, before his final years at Carlisle.

He had been suffering from senile dementia for several years. His wife Joan predeceased him 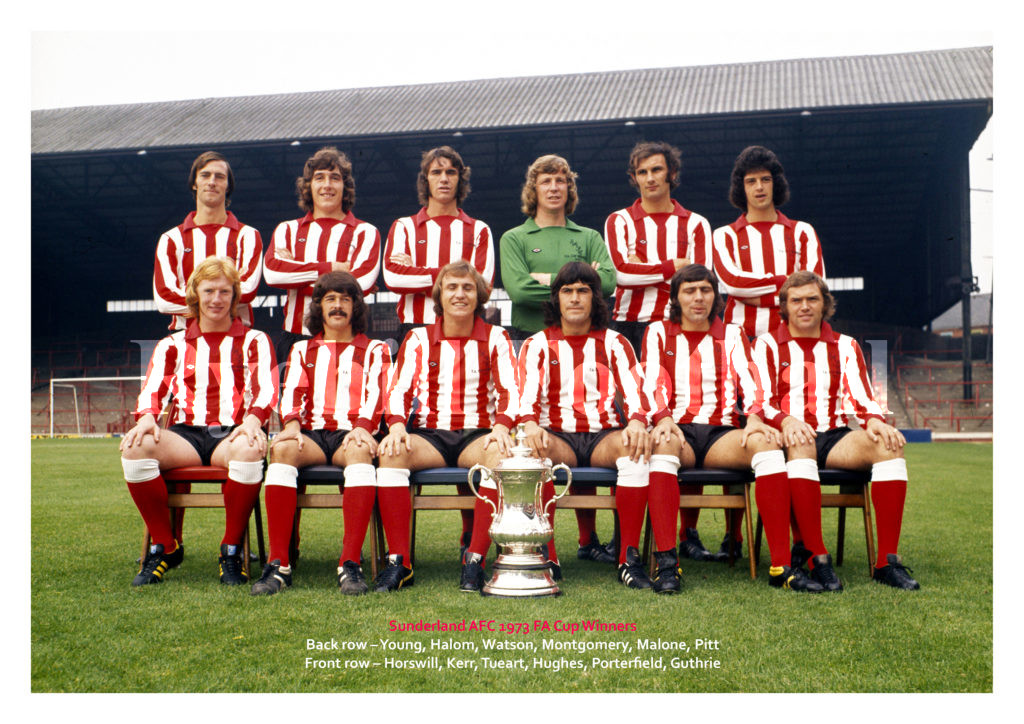 By Ken Jones, The Independent

“Obituaries on Bob Stokoe retold for the thousandth time the tale of Sunderland’s remarkable victory over Leeds United in the 1973 FA Cup final barely six months after 10 straight defeats threatened them with relegation from the old Second Division. Chances are they set some readers to musing on the changes that 30 years have wrought in the game of football. Perhaps others read the stories and thought: “It couldn’t happen now.”

They would be right in that anyway. The uncomplicated influence Stokoe brought to bear on a club that was stumbling towards possible extinction when he was appointed manager late in 1972 brought about one of the game’s enduring romances, and in these pressured times are probably beyond emulation.

Besides his devotion to football, another quality that stood out in personal memories of Stokoe when news of his death reached me this week was his unswerving honesty. It is linked to the great satisfaction he took from the 1973 success over and above a triumph against the odds and one of the then most powerful clubs in Europe.

When Stokoe was cutting his teeth in football management at Bury he fell out with Don Revie, who was beginning to shape an outstanding career at Leeds. Facing up to the bleak prospect of relegation, Revie offered Stokoe a sum of money to take things easy in a match at Gigg Lane. Revie was told what he could do with the bribe, and the two men never spoke again. “I’d heard of such things happening but I couldn’t believe it was being put to me,” Stokoe said one night in the long ago.

The incident was embedded so deep in Stokoe’s mind that a number of years later, as manager of Blackpool, he was reluctant to agree a deal with Leeds for a talented Scottish international inside-forward Tony Green, who eventually joined Newcastle United. “I tried to get Liverpool interested,” he told me. “When Bill Shankly asked me why I was set against the offer from Leeds I told him about the thing with Revie at Bury. Bill went silent. I don’t think he ever again saw Revie in the same light.”

I could only take Stokoe’s word for this but matters moved on when allegations of bribery, mainly involving a match against Wolverhampton Wanderers, were levelled at Leeds in 1973, leading to a probe by the Daily Mirror whose hard-bitten investigative team sought my assistance on the basis of what they assumed to be a friendship with Revie. As an employee of the Sunday Mirror I was obliged to give the investigators some time but I chose not to pass on things I had been told. One of their questions concerned Stokoe’s feelings about Revie, another the 4-0 victory Leeds suspiciously gained at Sunderland a few days after failing to enlist his co-operation at Bury.

Revie successfully brought a legal action against the Mirror and none of the Leeds players of that time have ever given any credence to the notion that their manager was involved in match-fixing. Whether Stokoe helped to instigate suspicions about Revie has never been clear. At least, it isn’t something to which he ever publicly admitted.

In many ways, the very best of ways, Stokoe was an old-fashioned football man who trod the line between toughness and sentimentality. A Newcastle player between 1947 and 1961, their centre-half in the 1955 FA Cup success against Manchester City (Revie was in direct opposition), he managed six different clubs, including Charlton Athletic, Blackpool, Rochdale and Carlisle United. At Charlton he missed a game due to the death of his dog. Along with poor results, it led to his dismissal immediately after a defeat at Crystal Palace. “The business with the dog was bound to work against you,” I remember saying. “It’s the way I am,” he replied.

One of the most revealing things about Stokoe was his competitive nature. Essentially a private man who strove, and not always successfully, to keep his emotions in check, he hated losing. Contemporaries at Newcastle recalled occasional outbursts of volcanic temper. He is famous, of course for sprinting across the pitch at Wembley, a trilby on his head, raincoat flapping to embrace Sunderland’s goalkeeper Jim Montgomery, whose sensational double-save had broken Leeds’s spirit.

In becoming one of a handful to win the FA Cup as both a player and manager, in making a fairy tale come true, Stokoe had established himself in the lore of the game. It was fashioned out of those faded sentiments, honesty, loyalty and pride. ”

Personally I would like to indulge in two memories of Stokoe in my own time supporting Sunderland. The first was not actually of Stokoe himself but of a silk scarf and banner that I used to have with “Stokoe’s Stars” written on it. I remember after our win against Bolton Wanderers on Easter Monday in 1976, that won us promotion, that I went home and hung my banner outside my bedroom for everyone too see. That was an emotional day and my first promotion with SAFC.

The second was at Bradford City when Stokoe made his return to the club following the dismissal of MacMenemy, with relegation to the third division staring us in the face. The anticipation of Stokoe coming out once more to greet the fans was overwhelming and when he appeared, to the delight of the travelling Roker Roar, the emotion got too much for many of us, including me. Alas it wasn’t to be and a second coming resulted in the unthinkable, despite Stokoe’s best efforts.

Of course a statue to Stokoe was placed outside the South Stand at The Stadium Of Light and now serves a host of purposes; as a meeting point for our supporters, a reminder of a very special time in the history of the club and also as a sign of what once was and could be again.

Lets remember what Stokoe once said – “I didn’t bring the magic, it’s always been here… I just came back to find it.”