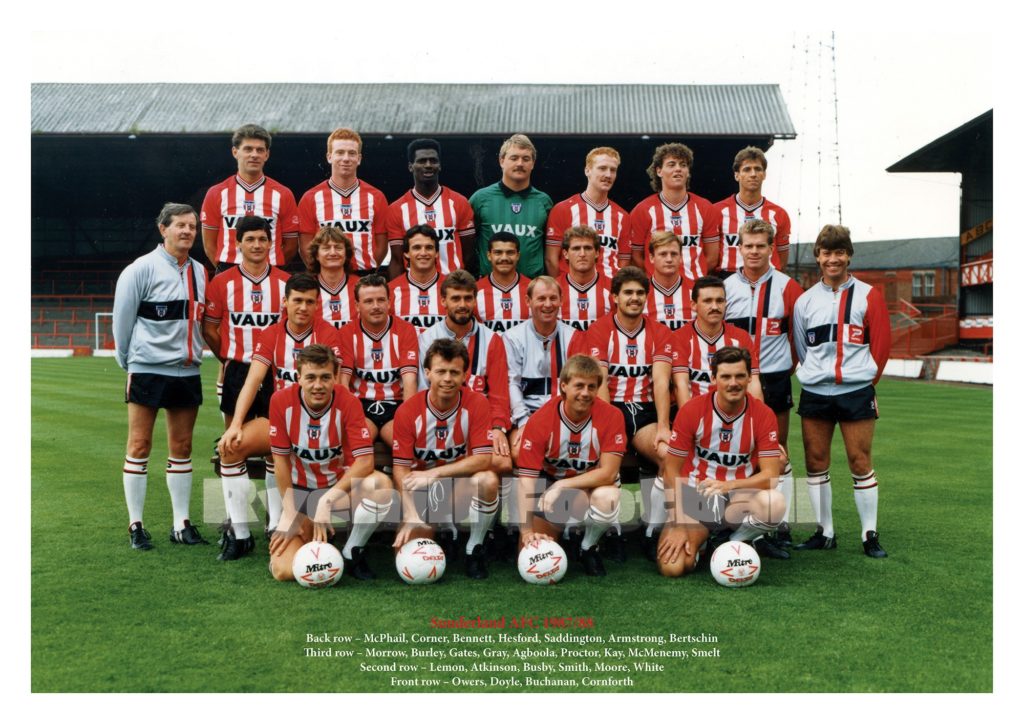 For a club like Sunderland, the “3rd division” is a sobering experience. As if to emphasise the point the season kicked off at Griffin Park, Brentford. Sunderland won, thanks to a good Keith Bertschin goal.

Sunderland then drew at home with Bristol Rovers, before travelling to Belle Vue, the home of Doncaster Rovers. The smallest crowd ever to watch a Sunderland league match was present; just 2,740 and with the Wearside fans caged in the open end it was not an impressive site. That Sunderland won was a blessing, and Sunderland then followed this up with a 4 v 1 thrashing of Mansfield Town. Then things went a bit pear shaped. Three draws, then 2 consecutive defeats, saw Sunderland in 12th place. The lowest league placing in their history. But help was at hand in the shape of a new signing, Marco Gabbiadini.

After home defeat at the hands of Chester City Sunderland took everyone too task. They won 6 off the belt, lost to Notts County and then came a rout.The evening of 17 November 1987 Southend United arrived on Wearside. The game started with the South coast team playing reasonably well and indeed they hit the woodwork before Sunderland even scored, but then the avalanche. In front of nearly 16,000 people Eric Gates scored 4, his fellow strike partner Gabbiadini notched and Atkinson got a brace. The final score of 7 v 0 had everyone looking for the record books.

Sunderland were now in their stride and the next 14 games brought 9 wins and 5 draws, 3 months without a defeat. Even 2 defeats, consecutively at Twerton Park, Bristol Rovers and The Recreation Ground Aldershot, didn’t disguise the inevitable. Sunderland were going straight back up.

The 12 March saw a game and a half at Wigan, where the travelling Roker Roar decided to cake themselves from head to foot in mud as they slid down the bank at one end. What sort of state some of them must have been in for the journey home doesn’t bear thinking about, but the result wasn’t what Sunderland wanted. Athletic scored a disputed equaliser almost at the death. Replays showed that the ball had clearly been kicked out of Hesfords’ hands. Then came another slight blip at Bootham Crescent, a 1 v 2 defeat.

Light relief came in the shape of the Mercantile Credit Football Festival at Wembley Stadium to celebrate the centenary of the Football League. At the invitation only tournament Sunderland didn’t last long and were defeated on penalties by Wigan Athletic after a goal less draw.

By the back end of April it was becoming clear, a couple more victories and Sunderland would be up. Mansfield Town and a midweek 4 v 0 success paved the way for Port Vale in the Potteries. Win and Sunderland were promoted. On a brilliant day for the travelling fans, Eric Gates scored the all important goal to seal victory and promotion. It was most opportune that there was a supermarket selling champagne right next to Vale Park. The Sunderland fans took full advantage.

On Easter Monday and the visit of Northampton Town to Roker Park the North East’s biggest gate of the season 29,454 turned up to watch Sunderland won 3 v 1 and claimed the third division championship.

With fancy dress being the order of the day “Dracula” and “The Pink Panther” made their way to Rotherham United for a final day party. That Sunderland won 4 v 1 was almost immaterial, that Sunderland had fun was the main thing. There were some sore head back in the North East that night.

Perhaps the most gratifying thing is that Sunderland got out at the first attempt and had now won 3 out of the 4 Football League Titles. Any longer and the consequences just didn’t bear thinking about. We bade farewell to the 3rd division, and in doing so, hoped that Sunderland would never go back. 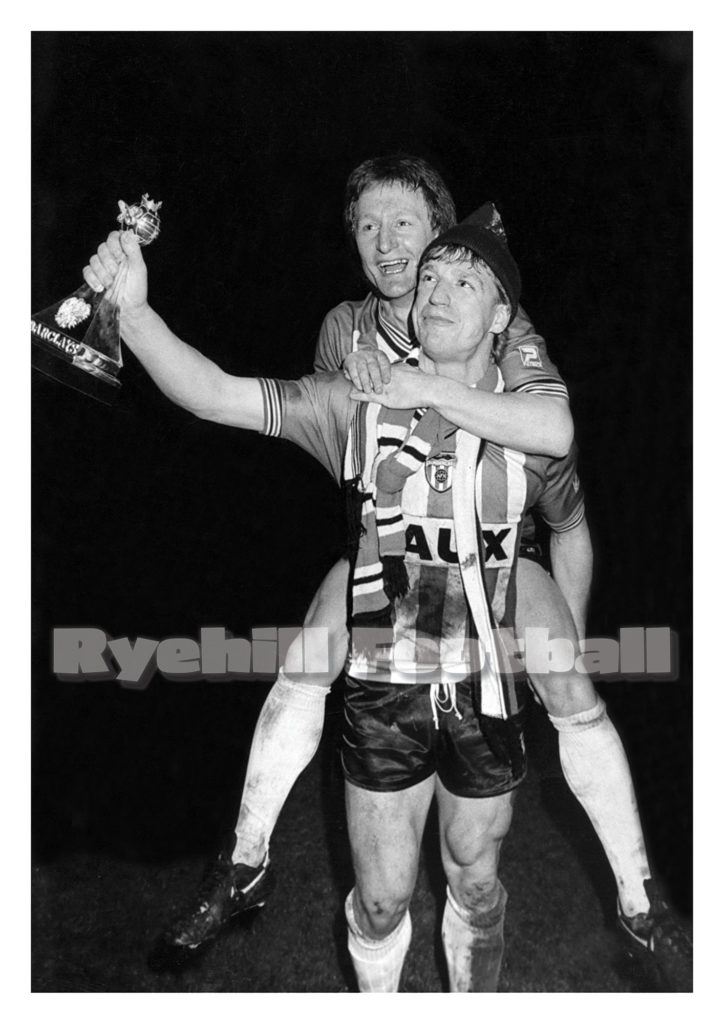 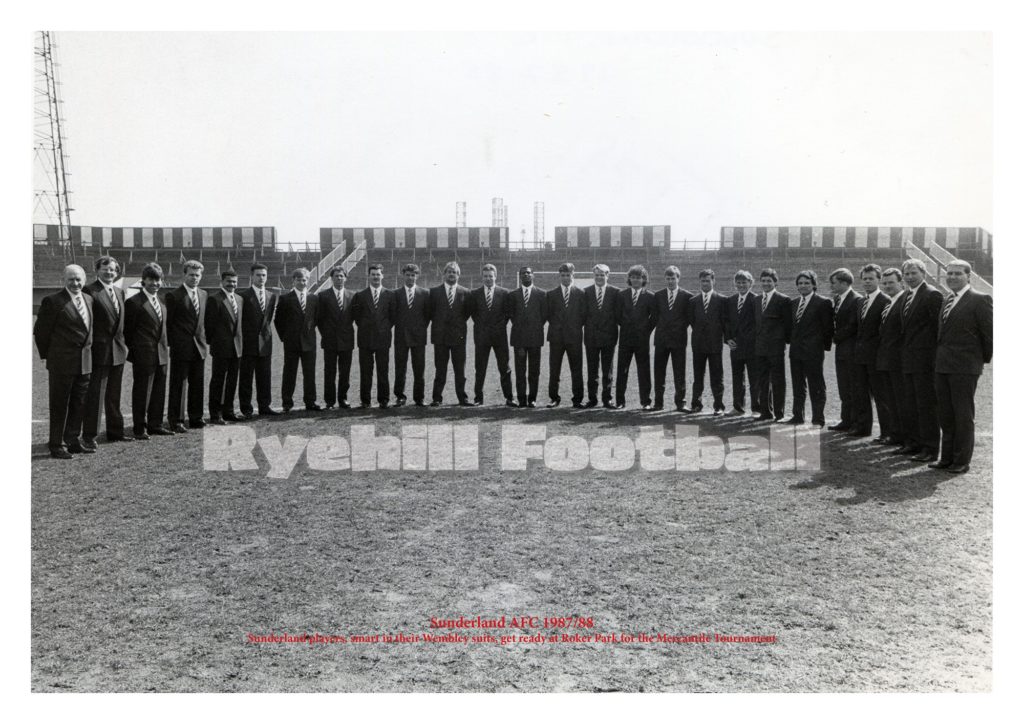