To celebrate the triumph the directors arranged a celebratory dinner on 22 May 1902 at The Grand hotel in the then town. Below is the Dinner menu that was produced for the occasion, together with the Annual report of the football club. A ceramic was also produced to celebrate the event. 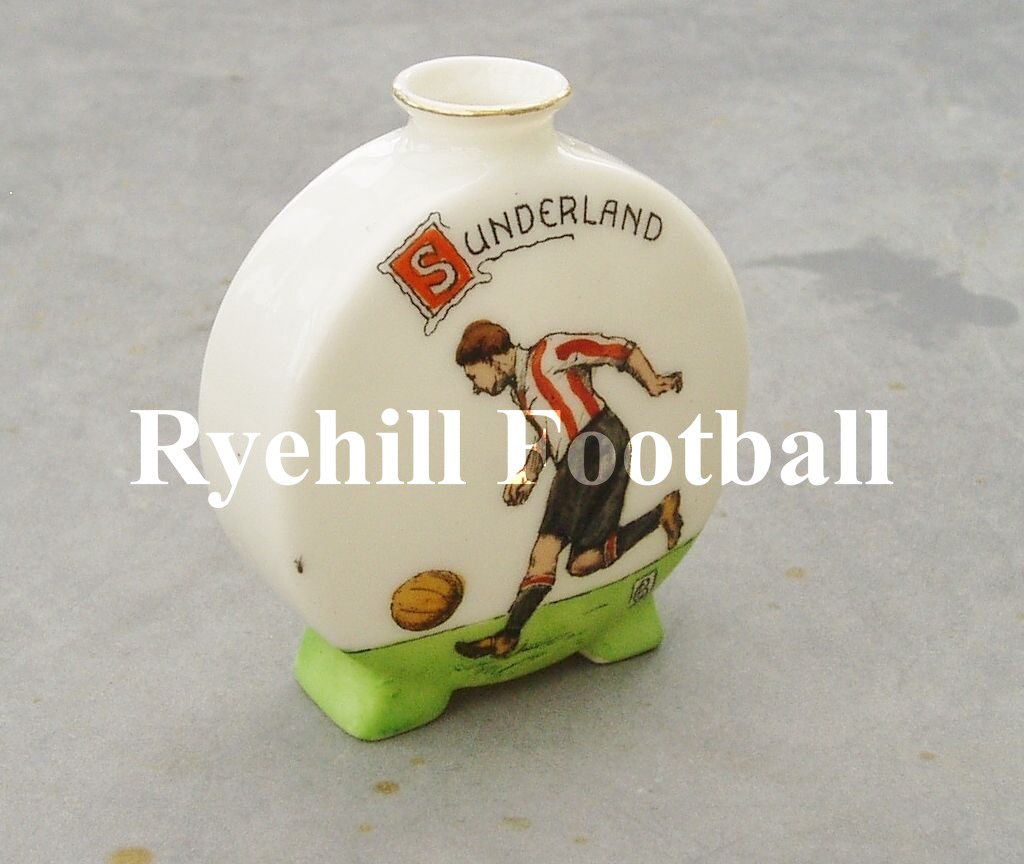 The annual ordinary meeting of Sunderland A.F.C. Ltd was held in the Grand Hotel with Mr J T Henderson in the chair. There was a good attendance and among those present ware Messrs S Todd, Jas Henderson, A Murray Jnr and C Christian directors.

The Annual report was as follows:- Last year we were able to report a gain of £987-6s-4d and it is now our pleasant duty to record a still better result in the balance of profit being a total of £1,241-17s-8d after allowing 10% – £790-10s-2d for depreciation. Reciepts from home league matches again show an increase and they would have been even greater but for poor weather when Aston Villa, one of the big drawing teams visited Roker Park. Reciepts for the match fell  short of last seasons takings by £670.

The match against Newcastle Utd drew a record gate with the number of paying spectators being 34,819 with reciepts of £1,153. From a playing point of view the season was most the successful in the history of the club. As is well known the first team won the league championship for the 4th time though hopes of doing well in the English Cup were not realised. The “A” team also did well in retaining possession of the Durham Senior Cup, the Tyneside Alliance and were runners up in the Northern Alliance.

The third team werte bracketed with Elswick Harriers for top place in the Northern Combination and also won the Mid Tyne Charity Shield. The attendances at our matches during the season totalled 268,629 as opposed to 262,388 last season.  The players who served the club so well last season have been re-engaged and we are confidently anticipating even better results next season.

The report was adopted unanimously. The chairman compared the financial reporrt with the corresponding items in last seasons accounts. He then congratulated the team on having won the league championship. They certainly had a hard struggle to win it and when one considers that the difference between Bolton and the top teams was only 16 or 17 points it shows that the teams are getting on a level with each other.  There were times when they had hard lines in getting beaten by very close margins.

The chairman then referred to the long distances the club had to travel to fulfil away fixtures and said the wear and tear of long journeys had a great effect on the players. He regretted the early exit from the English Cup which they had tried for years to win but always seemed to be dogged by bad luck. This year they had hard luck because the ground on which they played Newcastle was not fit for play and the game in his humble opinion should not have been played. At any rate they lost and could make no better of it.

The financial position of the club is improving every year and if they have another year as good as the last one he trusted that the whole of the clubs liabilities would be wiped out. Mr Henderson expressed the clubs regret at the untimely death of Matthew Ferguson on 12th of June. The report was adopted

In answer to questions the chairman stated the club held no lease on  the Roker Park ground from the landlords (laughter). He also stated that 1614 shares were held by persons other than the landlords. The following appointments were then made. Patrons;- the most noble The Marquiss of Londonderry, Sir W.T. Doxford MP., Mr S Storey, Mr Richard Murray, Mr J.S.A.Pemberton JP, and councillor W.M.Roche. Directors Messrs J.P.Henderwson, S Todd, Jas Henderson, R Murray Jnr, F.W.Taylor and C Christian. Audiotrs Messrs Neilson and Brown.

A vote of confidence in the widow of the late Mr Ferguson was passed and the meeting ended.