Founding Fathers – The Men Who Made Sunderland AFC – Volume 1 – Softback 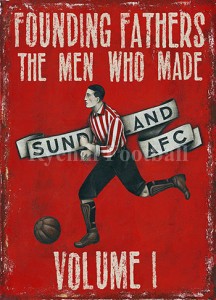 Ryehill Football presents the book that rewrites the history of Sunderland AFC.

Meet the men who founded Sunderland and District Teachers Association FC, the club that became Sunderland Association Football Club, as it starts its journey from The Blue House Field in Hendon.

Relive the early days of the club from its founding until the end of the 1886/87 season. Meet the pioneers such as club founder James Allan, the trailblazers, who from humble beginnings where a canary saves the day, work to ensure that the club gains an inevitable election to the Football League in 1890. Read of the matches where players simply walk off the field in disputed games and in Volume II the rivalry with Sunderland Albion where a battle for the footballing affections of Sunderland takes place!

For the first time ever find out when the club was really formed and the story behind why it has remained a mystery for nearly 140 years. Read the actual match reports from all of the known games, including Sunderland AFC’s very first football match.

Never before has the founding of a football club been told in such comprehensive detail as “Founding Fathers, The Men Who Made Sunderland AFC”.

The hardback versions are now sold out, however a limited edition paperback version is available to buy priced at £15.99 plus £4 postage and packing – hit the paypal link below. The paperbacks and the hardbacks are the same dimensions.

Founding Fathers Volume II has also just been published and is available to buy now.

2 thoughts on “Buy; Founding Fathers – The Men Who Made Sunderland AFC – Volume 1”