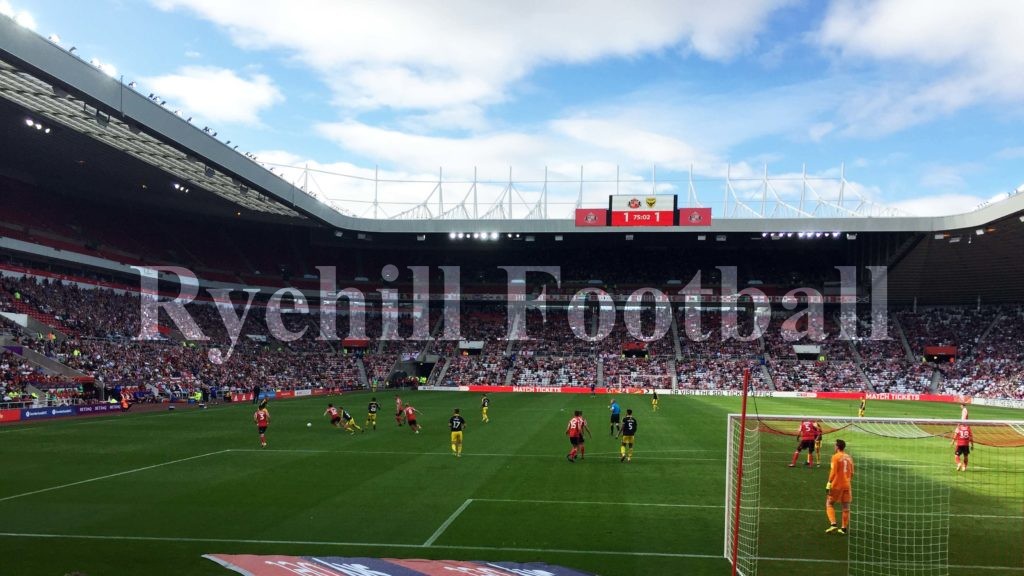 An overall poor display from Sunderland saw us come from behind to gain a point at home to Oxford United, who were always the better team and deserved to go away with something. Once more however we mustered the commitment to pull it back, scoring during our best spell of the game, a nice shot by debutant Charlie Wyke cannoning in off the far post in the early stages of the second half at the North Stand.

Oxford United started the game much the better team and deservedly went ahead after 16 minutes when a technically excellent free kick at the North Stand from Holmes, sneaked in at the near post. From then on in Sunderland huffed and puffed but werent helped by a debateable sending off when Power committed a clear foul – but in a position of absolutely no danger. Down to 10 men for 71 minutes we did well, in the end, to get a draw.

A lot of talk after the game was of the referees’ display and whilst its the easiest excuse in the book to blame the referee when you dont win his performance was too controversial, he made too many debatable and inconsistent decisions for his performance to be considered anything other than very poor.

Oxford’s number 10 seemed to have a good day practising diving for the olympics and acting a la Hollywood and if he goes down this easily in games then Oxford need to ask some serious questions about his physique and whether he is up to the rigours of the game at this level. Awful to watch, but overall Oxford were unlucky not to win and were the better team on the day. A mention to the 2000 Oxford fans who made the long trip to the North East. I’m sure they enjoyed their day and they can console themselves with the knowledge that some higher league teams havent brought that many up here.

As for Sunderland, its interesting this one. I’ve only seen us play well in one game this season; Scunthorpe at home. They were admittedly awful that day and perhaps the worst team to come to Wearside in many a year. However we are unbeaten in 6 games, having fallen behind in 4 of them and lie 4rth in the table, having played pretty average so far. It makes you wonder what will happen when the team gels, Wyke goes nap and we play well consistently.

In my opinion we are missing a”Marco Gabbiadini”. There is one piece of the jigsaw missing and we may have to wait until January now to find it. If we can maintain top 6 until then, the second half of the season could get really interesting. Top two or play offs is on.

The attendance was a remarkable 32,000 to emphasise what I’ve always said; that there is no other comparably sized club anywhere in Britain, with our last 30 plus year record (relegated 8 times; including third division football twice), who would pull in that many at this level. Not a chance. They created a great atmosphere and God knows what the away fans make of the noise when we score. Ultimately we will have our day.

Fair play to Oxford and the SAFC show moves on to the Checkatrade trophy on Tuesday v Stoke City Under 23’s. Ryehill Football will be there.