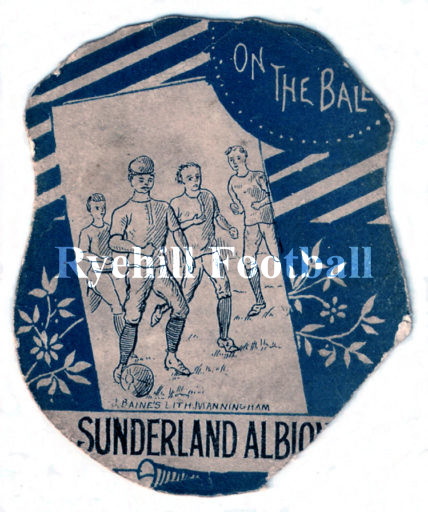 The announced formation of Sunderland AFC in September 1880 was directly attributed to one man, James Allan. Whilst Allan is rightly revered as the founder of The Black Cats some won’t know that he ultimately left SAFC in acrimonious circumstances and formed a rival club, Sunderland Albion.

The events surrounding Albion’s formation are shrouded in mystery and indeed it took the local Sunderland Echo newspaper some 9 months before they even broached the subject.

Whilst Allan was busy giving what was to be his final treasurers’ report at a meeting of the SAFC club on 3 May 1888 he had formed Albion in the background and presumably this was known to the directors at Sunderland AFC. It has to be because just 48 hours later Allan was quoted in the Sunderland (Daily) Echo (and Shipping Gazette) as being the secretary of “Albion FC”, and he was advertising their very first game against Northumberland’s Shankhouse Black Watch that day.

The history of Sunderland Albion deserves greater examination and Ryehill Football has commenced further research into this fascinating story where the very existence of Sunderland AFC was at one point threatened.

However for now read the match report, taken verbatim from The Sunderland Echo, of SAFC’s nemesis; Sunderland Albion’s first ever match. It uses terminology foreign to a modern audience; at times almost a different version of the English language.

There was a large muster of spectators at the Ashville ground on Saturday to witness a match between the above teams. The weather was fine but a strong wind greatly interfered with the play. This match was the inauguration the Albion Club’s career and next season there will be a regular course of fixtures arranged.

Owing to some misunderstanding some the members connected with the Sunderland Association Club did not turn up and their places were filled by Nugent, Melville, Baxter, Scott, and Gilmartin of the Elswick Rangers club in Newcastle. To allow some 5-a-side contests to be held, the kick-off was arranged for 2.40pm but it was 3.30pm when the game started.

The visitors kicked off at the south goal. A poor return was made and the wind frustrated the efforts of the home team get up the field. Aided by the wind Shankhouse at once began to press, and Stewart made his first save. From the several throws in which followed the visitors kept up the pressure until Oliver relieving, the home team changed the venue. Nice passing brought the leather again in home ground, and A Hamilton compelled Stewart to save, Monaghan took the ball up, but one of the visitors’ backs “mulled” the leather and returned. It was quickly rushed back and Kilpatrick narrowly missed scoring. Alter some give and take play the Shankhouse team worked down, and Oliver conceded a corner, which, however, proved fruitless.

Some good combined play transferred the game to the north end and following a scrimmage the Albion scored a goal. Shortly afterwards the home team obtained a corner. A kick by Moor sent the ball well into the goal mouth, however, Doney fisted clear. Albion returned, but the ball went behind the posts. Doney put the ball in motion and for the next few minutes the game was played in neutral ground until the home team rushing up got a corner. Monaghan placed the bail, and Nugent sent it into the goal mouth but Doney saved; Kilpatrick, however, immediately returned, and the second point fell to the home team.

These reverses seemed to rouse Shankhouse, and from the kick off they at once assumed the aggressive. The visitors kept the game at the low end, their passing being very effective. The ball travelled to the other end, Doney saved a shot from Kilpatrick, and the game was once more at the south goal. The visitors made a rush, but Stewart charged away, a corner resulting. Another quickly followed, which went behind. Half-time was then called, the score being Albion 2 goals, Shankhouse nil.

On changing ends the home team invaded their opponents’ ground, but Todd relieved, and the visitors rushing up seemed likely to score, but the leather was got away. A series of passing on the part the home team changed the venue, and with Melville putting a nice shot the visitors’ fortress was lowered for the third time. Albion again invaded the leather, however, going outside. The visitors’ right wing broke away, but Richardson was on the alert, and prevented further invasion.

Interest was next centred in midfield with “sky kicking” being the principal feature, the wind frequently sending the ball out of bounds. From a throw in Shankhouse worked up, but were repulsed, and, Albion rushing down, Kilpatrick passed over to Monaghan the latter of whom sent in a beauty, which Doney just “muled” in time, giving away a corner. Shankhouse made several attempts to get away, but their efforts were futile, with the ball seldom travelling beyond the centre.

Play was stopped for a few moments with the bail having split. A new one was quickly requisitioned. On being kicked off Hendy sent well up, but before his partners could get near enough to be of assistance the ball was returned. The Albion again pressing, carried the ball into their opponents’ goal mouth, and an exciting scrimmage ensued; the home team were however, unable to increase the score. Shankhouse next had a look in and made an incursion into Albion ground, the advantage being only short lived. From a throw the home team took the ball down, and made a determined assault on goal, but the visitors were equal to the occasion, and saved. The game, which had generally of a very interesting character shortly afterwards terminated. The score was Albion 3 goals, Shankhouse nil.

So Sunderland Albion were up and running with a 3 v 0 victory. Just one more game was recorded that season, a 3 v 1 win against Newcastle West End one week later. The 5 a side competition that was due to take place after the friendly game never took place as the authorisation telegram never arrived from the Football Association.

Allan tried to get 5 SAFC players to play in the game, including the likes of Gloag, but The Black Cats would almost certainly have put a block on it once they heard about their selection. Their non appearance was almost certainly not a “misunderstanding” as The Echo phrased it.

It’s interesting that Albion should have such a full account of their very first match, something that was not afforded Sunderland AFC way back in 1880 against Ferryhill, a scant and short report. The world of sports reporting had moved on in just 8 years.

Keen students of football history will know that what happened next. The turbulent and short history of Sunderland Albion was very much intertwined with that of the then town’s senior club, Sunderland AFC. Their relationship was acrimonious, sometimes violent and quite often played out in the local Sunderland Echo newspaper by officials from the competing clubs.

That is a much longer story and it was the subject of the 2007 publication “The Battle For A Town”.

Finally, Albion of course ended up playing their home games at Hendon’s Blue House Field, the very first ground used by arch rivals; Sunderland AFC. The field is still there and maintained by Sunderland City Council, right next to The Raich Carter Sports Centre.