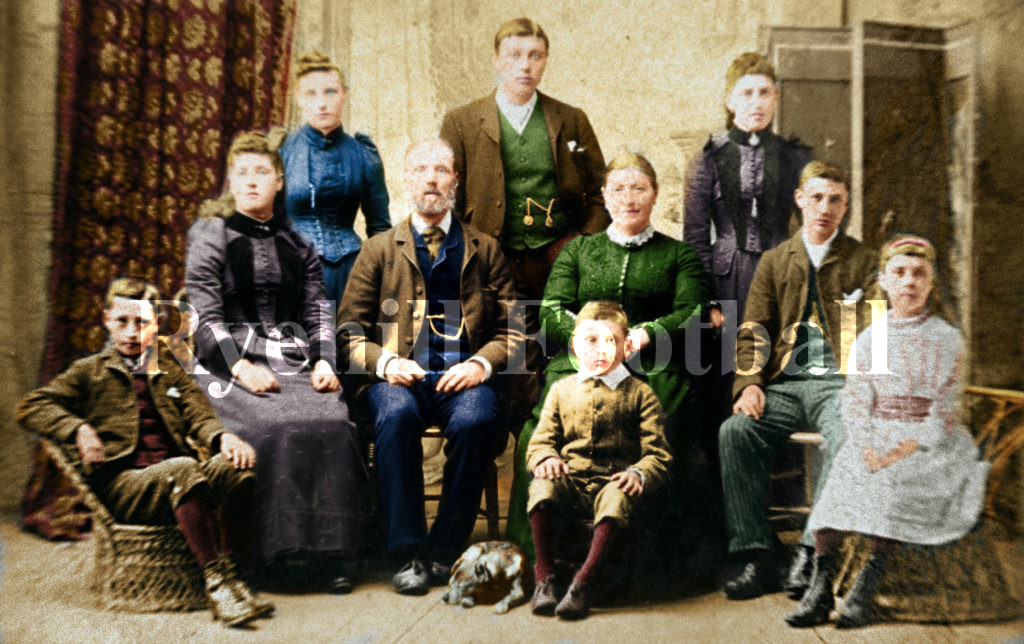 Campbell (back and centre) with his family, in a specially commissioned colourised photograph.

Born at Edinburgh Royal Infirmary, the illegitimate son to Jane Middleton; daughter of the Duke of Buccleuch’s gamekeeper, Campbell had a relatively short life but left his mark on the game of football and Sunderland AFC in particular.

By 1871 the Scottish census records show that John was living in Renton, with his mother, stepfather; Robert Campbell; and his newly inherited family following his mothers marriage.

A keen footballer from an early age Campbell joined Renton Union, the junior side from Dumbartonshire, before catching the eye of then top Scots side, Renton.

Campbell was in the Renton side that won the Scottish Cup in 1888, defeating Cambuslang in the final 6 v 1. He also featured for the club that beat English Cup holders West Brom in Glasgow in a match described as “The Championship of the World”.  He would win it again in 1895 this time with Sunderland when they defeated Hearts at Tynecastle in 1895. This makes Campbell the only known player to have won two world club championships with two different sides.

Internationally he played in one unofficial game for Scotland, in September 1888 where the Scots defeated Canada 4 v 0. The Scottish side included two of Campbell’s soon to be team mates at Sunderland, Donald Gow, then of Rangers and John Auld, then of Third Lanark.

Samuel Tyzack signed him for Sunderland in the summer of 1889 along with John Harvie, despite competition from other English clubs. At that time Johnny was twenty and he made an immediate impact in what was to be Sunderland’s last season as a non-league club.

The next summer Jimmy Millar arrived from Annbank, and the famous forward line of Scott, Millar, Campbell, Harvie and Hannah was created.  For the next four years “the combination of the front rank was the envy and despair of all the teams they encountered”, and Campbell’s performance in a 6-1 thrashing of Aston Villa at Perry Barr was described as “the most brilliant seen on the ground”.

Of this forward line, Millar and Jimmy Hannah were the dribblers and creators, Johnny Campbell the lethal finisher.  Of medium height and well built – his weight was to increase with the decline in his career – he had pace and dash, and could get through the toughest defence. A contemporary writer said, “I should say that he was by far the most dangerous forward individually.  I have seen him repeatedly run right through a defence and shoot a goal, and I have heard backs wondering how he managed to do it.”

The 1890s were, of course, a time when charging and physical contact were the norm, though it could never be said that the Sunderland forwards achieved such feats by force alone.  These were feats of staggering proportions by today’s standards: 217 goals in 57 matches in 1891-92, 100 goals in 30 League games in 1892-93, with Johnny Campbell the leading scorer in five out of the first six league seasons. 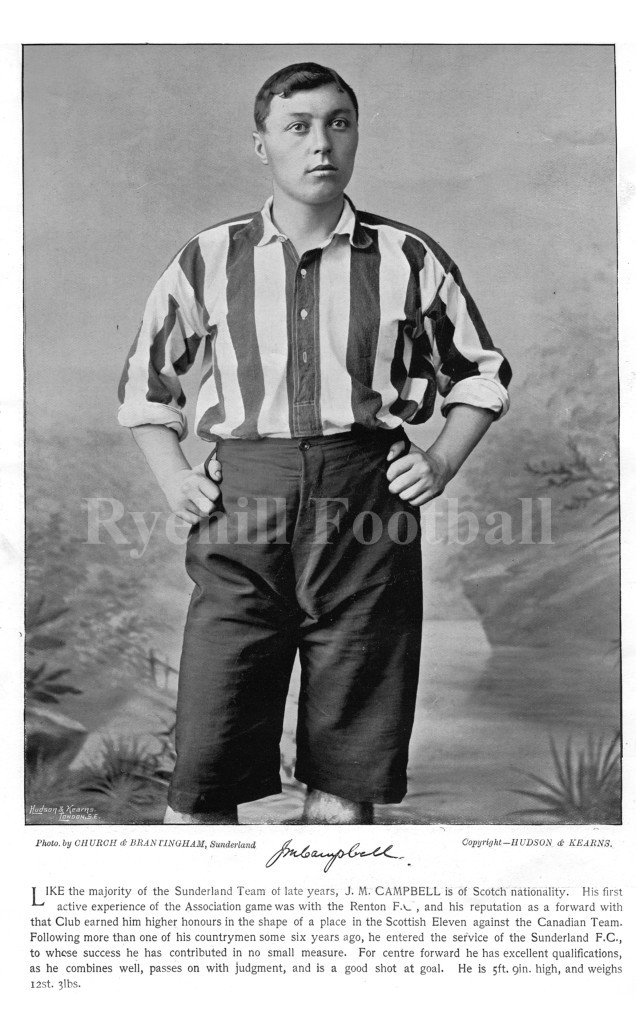 One of the most commonly used pictures to accompany articles about the Team of all the Talents is that of Johnny Campbell, thumbs hooked into his shorts, looking as if he meant business.  And for eight years in Sunderland he certainly did the business, scoring almost 300 goals in all games and being a central feature of the team that won three Championships in four years and were runners-up in between.

The 1891 census had a young Johnny living with the then Sunderland AFC Secretary/Manager, Tom Watson and family in Sunderland and in the era before big money football, he was employed, whilst at SAFC, as a mechanic in a sugar mill.  Robert Campbell, step brother of Johnny, who would in time would become the manager of the red and whites, also lived there.

A year later and the couple had a son, Robert Leslie Campbell, although he quickly became estranged from his parents as the 1901 census has the little boy living with his maternal grandparents in Renton. He would die in 1954, aged 59.

As with all great teams, the Team of all the Talents could not survive for ever. The same writer surmised “Towards the end I used to think that they overdid their passing, and gradually lost their deadliness in front of goal.”  Whatever the reason (and there were also disputes within the club about players’ discipline), in his prime Johnny Campbell was a centre forward without parallel.  That he never played in a home international for Scotland (though he did wear the dark blue jersey against Canada) was not down to there being better players around, but solely because at that time the Scottish FA preferred to select players from Scottish clubs.

In 1896 Campbell was selected to play for the Anglo Scots team v Home Scots.

Johnny left Sunderland at the end of the 1896-97 season, moving down a division to join a club that was very much in the shadow of the premier side in the North East. Newcastle United had good reason to be grateful for the services of Johnny Campbell, who achieved the distinction of playing in both Sunderland’s and Newcastle’s inaugural Division One fixtures, the latter after helping them to win promotion.  However they did not show their gratitude, and Johnny only made one more appearance for The Geordies before leaving the game in highly acrimonious circumstances, having taken over a pub in anticipation of a career after retirement.  The Newcastle directors suspended and eventually dismissed him for doing this, stating that it was against the club’s rules.

Campbell took over the tenancy of The Darnell Hotel in Newcastle but tragedy struck late 1900 when The Lennox Herald reported that Campbell’s wife, Mary, had died.

Only six years later, in 1906, Johnny Campbell passed away, due to a brain haemorrhage, at The Turf Hotel on Collingwood Street where he was the licensee, aged just 36. He was buried in Bishopwearmouth Cemetery, Sunderland.  Many Sunderland players of that era died young, but Johnny’s passing was one of the most widely mourned. A world class striker of his day without peer.