From Sunderland to the Somme 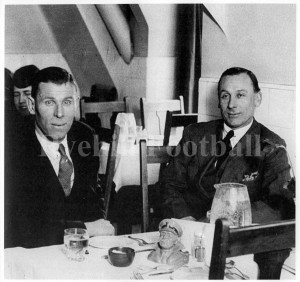 Charlie Buchan was one of the all time Sunderland greats, and pre war perhaps the finest striker England produced. He stood an impressive 6ft tall and weighed in at 12st 3lbs.

Born at Plumstead in London he started his career with the Northfield club before moving to Leyton Orient having previously left Arsenal in a row over expenses. Signed by manager Bob Kyle for Sunderland on 21 March 1911 for £1,200, he was just 21 when he played in the 1913 FA Cup Final.

He was an all round sportsman and had played Cricket for Kent.

His favoured position on the football field was inside right, and many said that his playing style reminded them very much of the Corinthians, praise indeed for such a fine club. He gained representative honours with England, making his debut against the Irish, and twice played against the Scottish League.

His England debut was in Belfast on 15 February 1913, and alongside him were his Sunderland colleagues Jackie Mordue and Frank Cuggy, the Sunderland Triangle. “Perpetual Motion” was its other name. Typically Buchan scored after 10 minutes; old habits die hard at any level.

The game was memorable for all the wrong reasons, Ireland’s first victory over England in a full international 2 v 1.

Strangely enough, having parents who were both Aberdonians he was asked to play for Scotland in 1912. He declined, as having been born in Woolwich he wanted to play for England.

His second inter league game resulted in a 4 v 1 defeat by Scotland in Glasgow, but Buchan had the fortune to be up against some class players. Bobby Walker the Heart of Midlothian inside right and outside left Alex Smith of Glasgow Rangers left Buchan an admirer.

He tells of how on his first trip abroad with the league side he travelled 36 hours on a train to Budapest. Arriving in the hotel all the players snuck out of the hotel and spent the entire night in the best nightclub that the Hungarian capital had to offer. The team triumphed 9 v 0!

His first game at Hampden Park for his country had been in front of a then world record crowd, some 127,307 in a 1 v 1 draw. The match ended up a duel between the England right back Bob Crompton and the Celtic outside left Jimmy Quinn. Buchan stood in fascinated awe.

At the end of the 1911/12 season Buchan went on holiday to Hamilton, Ontario, Canada and whilst there was invited to play football for a local team. That he did, with a knotted handkerchief tied round his head to prevent sunstroke, and assisted them in reaching the final. But back home a photograph of Buchan in a distinctive yellow and black striped shirt reached Roker Park and he was carpeted by Manager Bob Kyle. 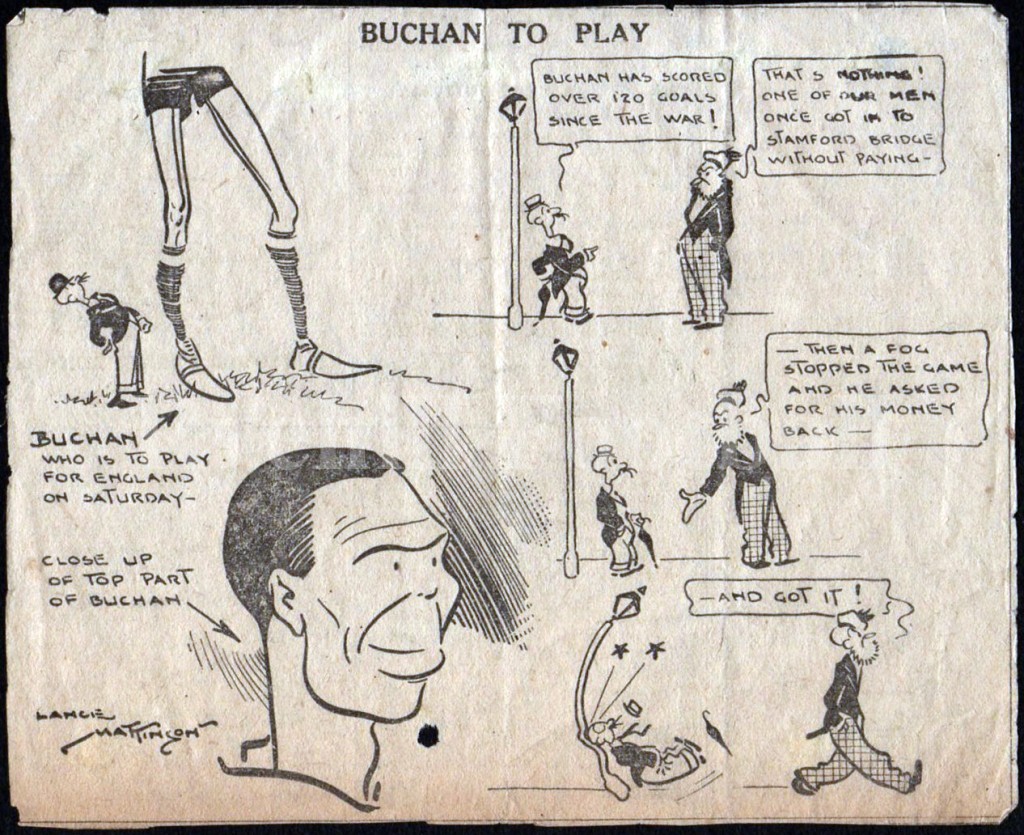 Buchan considered Sam Hardy of Aston Villa the finest goalkeeper he ever played against and was proved right as the Villa man kept Sunderland at bay in the 1913 FA Cup final at Crystal Palace. To place Buchan’s popularity into perspective some of our older fans who saw him play can recall a chap who used to carry a board around the perimeter of the field that said “Buchan Playing Today”.

By the end of his Sunderland career, which had lasted some 15 years (4 years lost to the war), he was the only red and white to score 200 league goals. Having played some 380 league games he was transferred to Arsenal in July 1925. He had just opened up a sports outfitters business when he was allowed to speak to the legendary Arsenal and ex Leeds City Manager Herbert Chapman, and much to his dismay he left. It was at Arsenal that he was instrumental in devising the WM formation in response to the 2 man offside law. He finished his career on 5 May 1928 at Goodison Park in a 3 v 3 draw against The Toffees, a Game in which Dixie Dean scored a hat trick.

During the War he played soccer for the Guards Depot before turning out for Chelsea, but this didn’t last long. He also had spells playing for both Birmingham and Huddersfield Town. When the war ended he of course returned to Sunderland, who had retained his professional registration. Prior to league football starting again he had taken up a teaching position at Cowan Terrace School.

Buchan went on to become both a Broadcaster and a Journalist with his Football Monthly magazine.

During the war Buchan served with the Grenadier Guards. On being given Lance Corporal Status he ended up fighting on The Western Front at The Somme, Cambrai and Passchendaele, 3 of the bloodiest conflicts of WW1. That he survived all 3 to tell the tale is a feat in itself, that he was also decorated for his bravery makes his Boys Own story complete. They don’t make many like Buchan.

In his autobiography “A Lifetime In Football” he modestly makes little mention of his war record and the events surrounding his decoration were never revealed. However here are those details.

Captain in the Grenadier Guards, Buchan’s Unit was pinned down in battle. In an effort to save his men he stormed a German lookout post with his troops close behind him. They took the lookout post but in doing so Buchan was bayoneted in the foot by the one German soldier who had remained alive. Luckily for Buchan (a footballer remember) the bayonet went straight through the gap between his toes. The fate of the German soldier is unknown.

His commendation was made sure when, under enemy fire he went back to the mess tent to get his men food as their rations had run out. His cause was presumably helped by the fact that he was a fast runner.

Buchan’s Military Medal was gazetted on 12 December 1917, won presumably at Cambrai, some 7 miles behind the Hindenburg line, which had been fought the month before. There was no citation with his medal but he was nominated for a Commission shortly after he won it.

The Battle at Cambrai is significant in that it was the first time that Tanks, some 400 of them, had been used in significant force in a War. To place Buchan’s bravery into perspective the Germans suffered 50,000 casualties and the British 45,000.

The German Army’s Chief Of Staff Paul von Hindenburg described the Battle of Cambrai thus, “From the point of view, not of scale, but of the obstinacy which the English displayed and the difficulties of the ground for the defenders, the battles which now raged in Flanders put all our battles on the Somme in 1916 completely in the shade”. 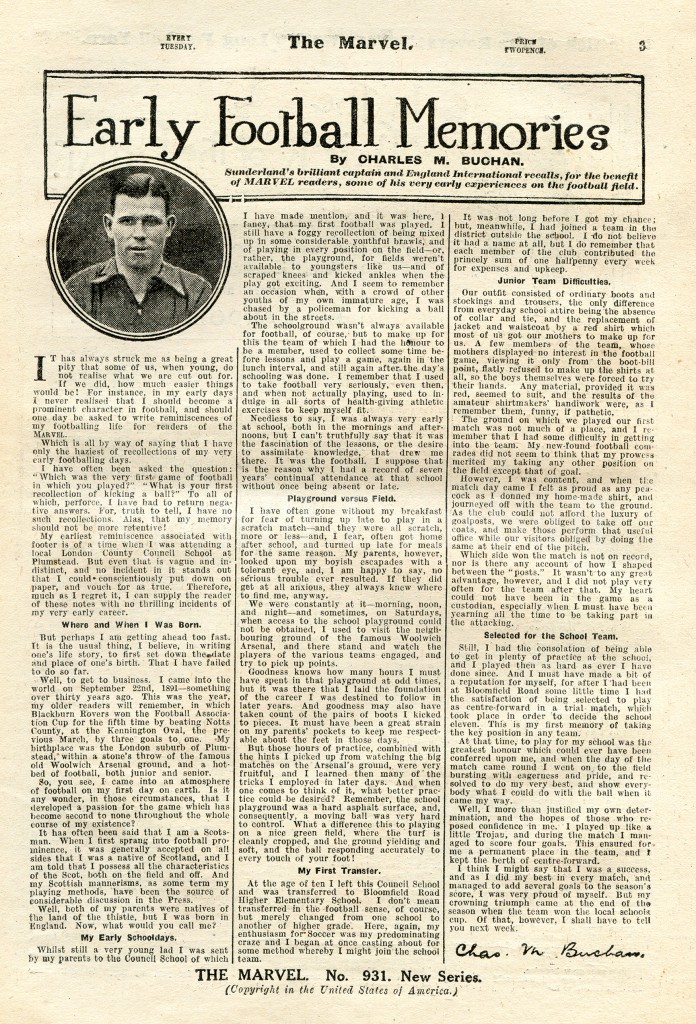 Buchan as we have seen somehow lived to tell a tale of 3 ferocious battles on The Western Front but he eventually succumbed to meet his Maker on 25 June 1960 in unusual circumstances.

He and his wife had gone to Beaulieu Sur Mer in the South of France for their summer holidays in June 1960. They went there most years and stayed at The Metropole Hotel near to the Casino, drinking champagne at 11am every day. They would then go to the races in the afternoon and after dinner they would go to the casino.

On 25 June 1960 Buchan had a considerable win at the casino. He subsequently had a heart attack and died. As he wasn’t Catholic they couldn’t take him to the local chapel and so his body laid in rest at the Casino overnight.

His wife went back to the hotel and mid morning the next day she was greeted by the sight of her husband’s coffin with a bottle of champagne in it together with a vase of flowers from the casino manager.

Members of his family flew out from England to retrieve the body and bring it back to the UK. However there was an air strike at the time and they couldn’t make the return trip. Therefore and as the weather was scorching that summer, Buchan would have to be cremated, a very rare event in a Catholic country such as France at that time. However there was a problem, there was only 1 crematorium in the South of France, at Marseille, a long journey from Beaulieu Sur Mer.

A hearse subsequently arrived to take Buchan’s body to Marseille but bizarrely on the way and at 12pm the hearse pulled into a restaurant car park so that the driver could have his lunch, with wine, and 2 hours later the journey continued. The hearse arrived at Marseille but as the crematorium hadn’t been used for years it had to be opened up especially to cremate Mr Buchan. Following the cremation the family members then went back to Beaulieu Sur Mer with Mr Buchan’s ashes and from there travelled back to England in a cargo plane. A memorial service was subsequently held at St Bride’s Church in Fleet Street.

The News Chronicle commented on his passing;”that rare combination, the complete footballer and the perfect gentleman”. Of his time on the Western Front he stated, shortly before his death that “it was tough, mighty tough, but I know now it did me all the good in the world. I was proud to belong to the Grenadier Guards”.

Buchan’s career record of 209 league goals for Sunderland has yet to be surpassed.

Charlie Buchan ranks alongside Raich Carter and Bobby Gurney as our finest of pre war players. His career is indelibly linked to that of Sunderland AFC. As footballing legends go he stood with the greats of the English game. Buchan’s ashes were interred at Golders Green cemetery and he has an entry in the book of remembrance which can be read every 25 June i.e. the anniversary of his death. His ashes are in a niche in the hall, top floor on the North Wall, number 5793.

Buchan’s entry in the Book of Remembrance at Golders Green Cemetery, on the 25 June date, reads quite simply “Buchan, Charles Murray, 1960, God’s Finger Touched Him And He Slept.”

One thought on “Charlie Buchan; From Sunderland To The Somme”