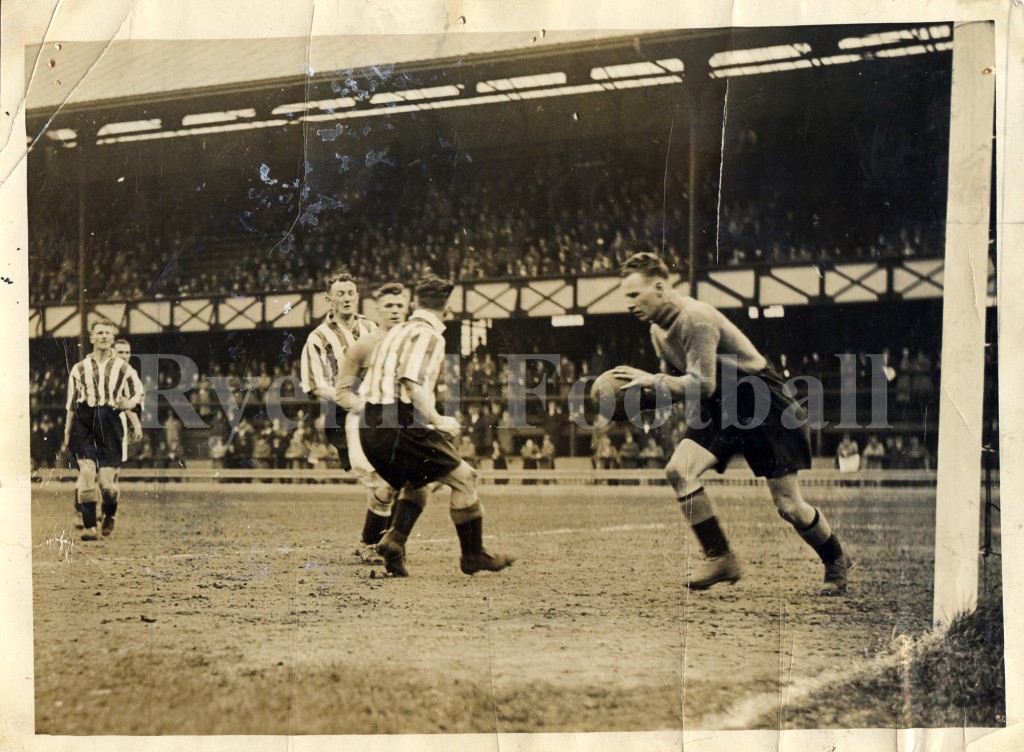 Sunderland had 2 points apparently in safe keeping at Roker Park and lost them through goalkeeping errors by Thorpe. To give Thorpe his due he had saved one very dangerous situation shortly before Bambrick beat him twice within 3 minutes well into the 2nd half. At the time Sunderland were leading 3-1 then Bambrick hooked the ball against the bar and as it fell Thorpe missed it and it rolled just over the line before he grabbed it. Sunderland protested and persuaded the referee to consult a linesman but the result was still the same, a goal.

Then Johnston back passed to his goalkeeper who had plenty of time to pick the ball up as Johnston was there to cover the onrushing Bambrick. Thorpe however lost the ball to the centre forward who promptly banged it into the net to level the score. It was a tragic moment for Thorpe. More drama was to come for 10 mins from the end Hastings was badly brought down in the Chelsea penalty area as their defenders beat off an attack. The linesman called the attention of the referee to what had occurred and after a discussion between the two the referee ordered Chelsea right half Mitchell off the field. He was loudly booed as he left.

Twice in the 1st half he had been spoken to by the referee for fouls on the Sunderland left winger and thereafter he had a bad time with the crowd. The referee too did not find much favour with the spectators and certainly firmness in checking rough play, chiefly on Chelsea’s part, might have avoided the 2nd half climax. Sunderland were much the better football side. They dominated the game to such an extent that they should have won comfortably. There was all the old positional sense, all carried forward through the defence only to come up against a great goalkeeper in Woodley.

Gurney led off with a smart goal the result of passes by Thomson and Carter. Then Gibson equalised with a goal from a corner kick by Spence. Gurney scored again after Woodley had punched out a hard drive. Before that Gurney had put the ball in the net only to be given offside, a decision which the home players disputed. Gallacher got the 3rd goal midway through the 2nd half following a free kick by Connor after a bad foul on himself. There seemed no doubt about the result until Thorpe’s tragic blunders.

One pleasing feature of Sunderland’s display was the return to form of Johnston. He was something of his old self of last season and allowed Bambrick to see little of the ball. The home forwards were nearly as skilful as they can be but there was just a little hesitancy in shooting. Carter was the most active marksman but he could not beat Woodley. Murray had a satisfactory game and altogether there was a definite superiority over Chelsea who must be counted lucky to get a point. 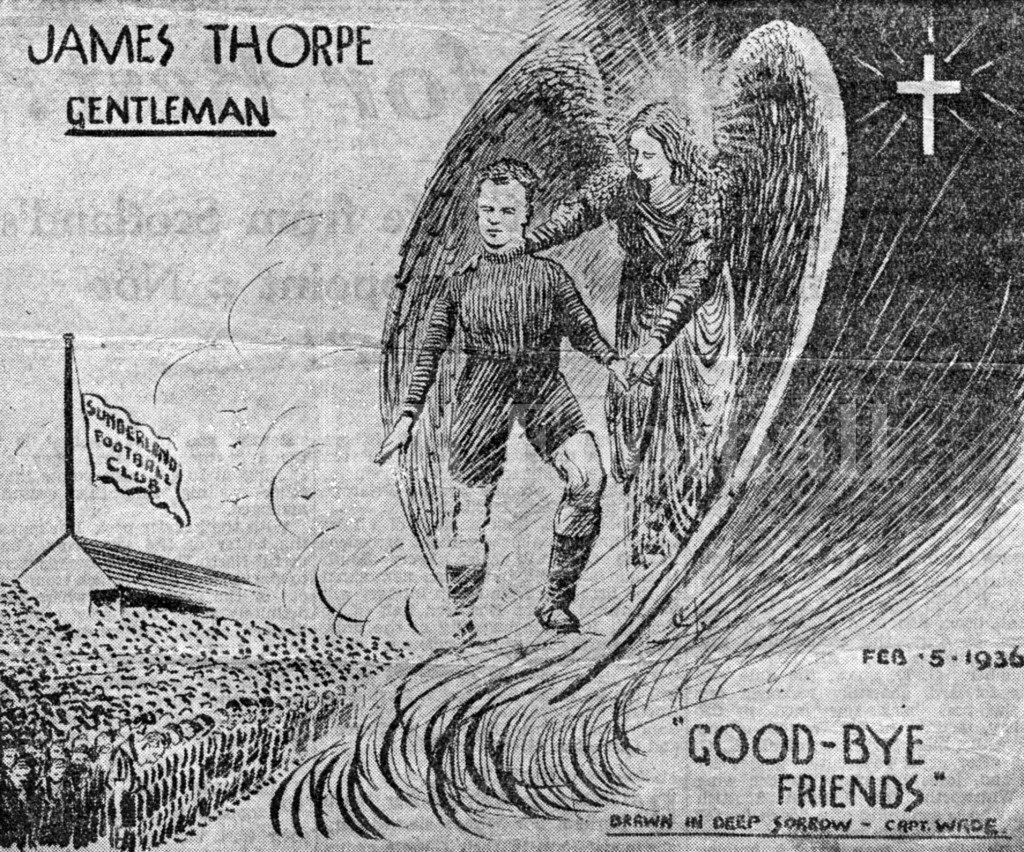 Midway through the second half, Thorpe fell on the ball in his area and clasped it tightly, thereby signalling the end of Chelsea’s latest attack. Three Chelsea players, however, thought otherwise and started kicking at Thorpe’s upper body and head. Only when Sunderland defenders intervened was Thorpe rescued.

But despite rubbing his head and, by reports, looking disorientated as he leant on a goalpost, the referee, a Mr Warr, waved play on and Thorpe stayed on the pitch. No magic sponge was seen.

It was not to Thorpe’s or Sunderland’s benefit that he continued. Leading 3-1 before the incident, Chelsea quickly scored twice and the game was a draw. Thorpe left the field nursing a worryingly sore head; Mr Warr left escorted by two policemen.

Jimmy Thorpe went back home that night to his house on the edge of town. His father visited to make sure he was all right. It was to be their last meeting.

Following the end of the Chelsea match on 1 February, Jimmy Thorpe collapsed at home and spent all of the following Monday in bed very seriously ill as a result of a kick he sustained in the match. He had a head wound and swollen eye and a badly bruised face. He was later admitted to the Monkwearmouth and Southwick Hospital and died on Wednesday the 5th of February.

The previous professional player in England to die as a result of a footballing injury was S Raleigh of Gillingham who passed away in December 1934 as a result of concussion. In September 1931 the Glasgow Celtic goalkeeper, Thomson, had died following a fractured skull sustained in the Old Firm game against Glasgow Rangers.

On Monday 10 February Thorpe was buried at Jarrow Cemetery, the cortege leaving 11 York Avenue, Monkton, the home of his in laws, at 2.30pm. The funeral was attended by all of the Sunderland players and Directors with the former acting as under bearers.

Local residents, his community, lined the streets four deep along the way to the cemetery to honour the young goalkeeper. As well as expected wreaths from Sunderland AFC there were others from Chelsea, Everton, Newcastle United and Sunderland Police Recreation Club. 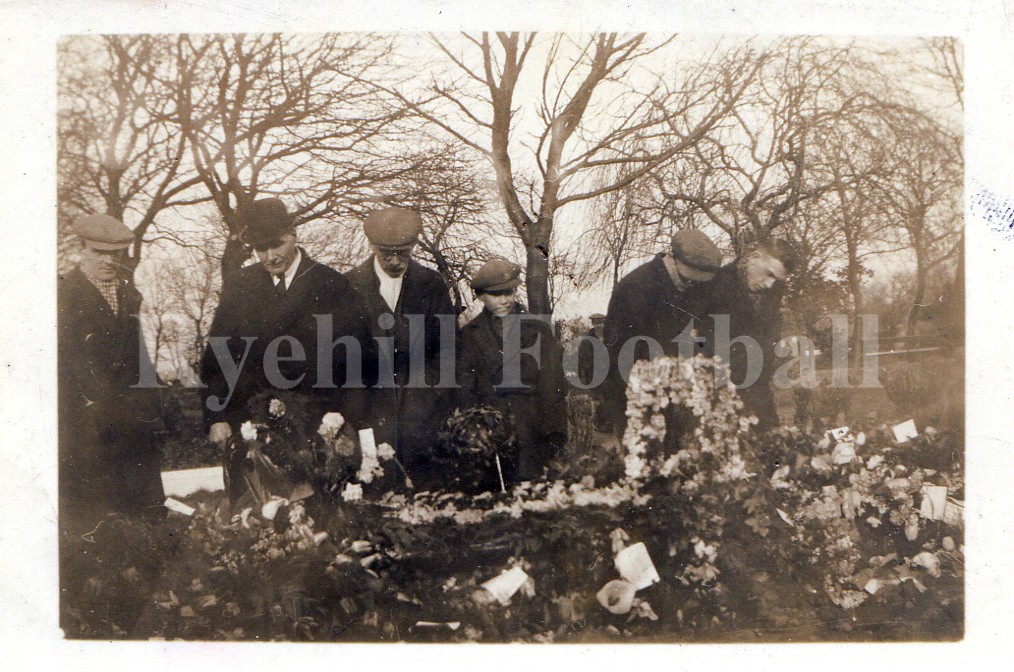 A subsequent inquest into Thorpe’s passing which commenced on 13 February under the direction of the coroner JC Morton gave the cause of death as due to Diabetes “accelerated by the rough usage he received in the game and that the referee was very lax in his control of the game”.

Jimmy’s Father had confirmed that his son had sugar diabetes and had previously spent a four week spell in hospital as a result of his condition. The inquest focused on a particular incident in the game that was graphically described where one moment Thorpe was kneeling in the goalmouth and following a rush by four Chelsea players the young goalkeeper was left sprawled out and lay there for “a second or two” as the opposition players had kicked him repeatedly to try and get the ball. Sunderland players such as Murray had immediately come to Thorpe’s aid and legitimately shoulder charged the Chelsea players as they tried to protect their team mate.

As a result of what the coroner heard he urged the Board of the Football Association to instruct all referees that they must exercise stricter control over the players so as to eliminate as far as possible any future accidents.

On 17 February 1936 the Football Association set up a commission to look into Thorpe’s untimely death. For the commission both Sunderland and Chelsea were required to submit their observations on the game.

However the Commission was in effect a whitewash with the referee being exonerated and rather incredibly Sunderland were blamed for allowing Thorpe to play, despite evidence from the clubs Doctor that Thorpe was known to be in good health, despite his diabetes.

Sunderland was subsequently crowned league champions and on 7 May 1936 the club held a celebratory dinner at which Thorpe’s widow and mother were in attendance. Jimmy’s championship medal was duly presented to them.

Thorpe had joined Sunderland from his home town team Jarrow aged 17 on 26 September 1930. He was talented enough to be selected for the first eleven after just 2 games for the reserves and was rumoured to be a likely England selection at the time of his death. He made a total of 139 league and cup appearances for Sunderland.

He died aged just 22, leaving a wife May and a 3 year old son Ronnie.

As a postscript to Jimmy’s death it was all too much for his Mother Emily. Bereft at her son’s death she passed away herself just three months later. 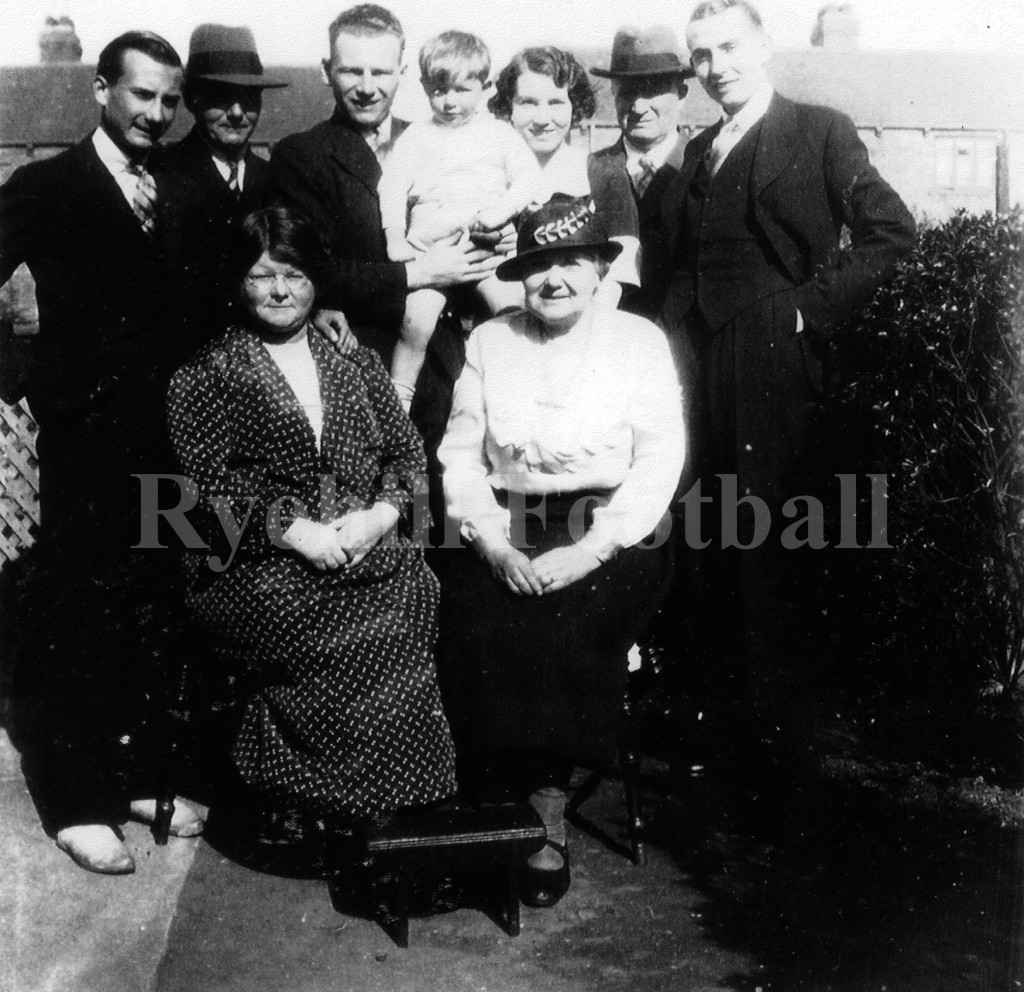 Jimmy Thorpe in happier times with his family, including holding his son Ronnie, then just a young child

As a postscript to this story I thought that you might like to read the words of Jimmy Thorpe’s son, Ronnie, who wrote the introduction to the book Total Football, Sunderland AFC 1935 to 1937, which was dedicated to his Father. This is what Ronnie had to say:

“I would like to thank the authors and publishers of Total Football! 1935 to 1937 for giving me this opportunity to write the foreword to this book. The dedication to my Father was an unexpected but satisfying event for me.

Satisfying because it is good to know that my Father, James Thorpe, is still fondly remembered by supporters of Sunderland AFC and a fitting tribute to his sudden death aged just 22. With the passing of time comes the fading of memories but some still remain with me.

I can remember my Father walking onto the Roker Park pitch with me in his arms when I was just a few months old, no doubt to take the plaudits for yet another successful season for Sunderland AFC. My Father was also a good cricketer, in fact having talked with people over the years they thought that he was or could have been a better cricketer than footballer and indeed played for Boldon in the close season.

He was also very talented with his hands and I can remember the model train set and tracks that he made himself, which stood the test of time.

Although a lot has been written about my Father’s passing over the years I would like to pay tribute to Colonel Prior, then Chairman of Sunderland AFC, who was very good to my Mother in the immediate aftermath of my Father’s death.

Although my Mother, May, re-married and subsequently passed away herself a decade ago the events of the day must have hit her hard. A young widow with a young son to support wouldn’t have been an easy task in the 1930’s.

The death of my Father did have one positive impact on the game of football in that it resulted in the protection of goalkeepers from the sort of rough play that my Father endured.

Whilst the reader of this book will encounter the sad passing of my Father it also recounts the joy and triumph of our football team, Sunderland AFC, in an era where they were a dominant force. My Father played his part in that triumph. I still have his League Championship medal a reminder of a talented footballer with the world at his feet and a Father that I barely got to know.