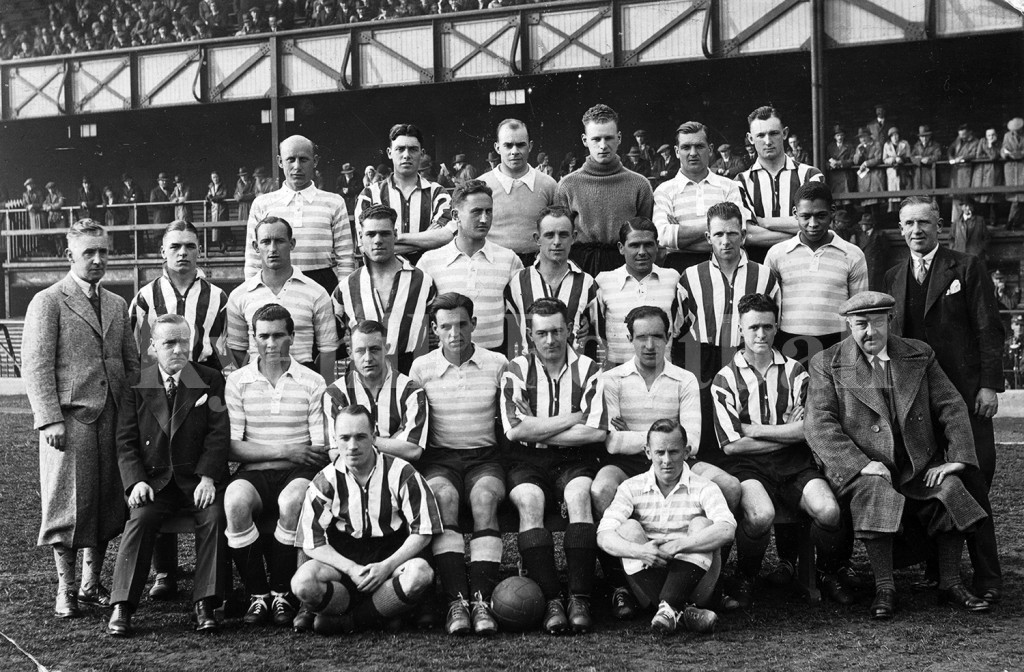 Sunderland’s display of football in this match may have been splendid or on the other hand it might have been mediocre. It is impossible to tell with any degree of accuracy just how well or how indifferently they did play. The visitors may or may not have been the best team France can produce but their efforts more often than not were extremely crude. There is no doubt at all they are benefiting from the English coaching methods that are being used in France but somehow or other their splendid ideas failed to materialise.

There was one really amazing incident in the game that led to the visitors 2nd goal 15 minutes from the end. Delfour put a splendid pass down the wing to be collared by Galley who made tracks for goal. Murray barred his way but Galley thought him an obstacle to be lightly brushed aside and proceeded to do so with a most correct rugby fashion hand off that a stricter referee would have called foul. Once Murray had been cleared out of the way the winger went on to score a really fine goal.

Although the French team were far the inferior their inside left Viennaute was the cleverest player on the field. Little behind him on merit was Hungarian centre half Berkessey. He stands over 6 feet and despite his bulk was as dainty as Yorston. There can be little praise for visiting goalkeeper Tassin. It is the hallmark of excellence in goalkeeping on the continent to be spectacular and make flying leaps at every conceivable opportunity even though the ball is yards high or wide. He should have saved a least 3 of Sunderland’s goals with little difficulty.

Perhaps the sun upset his judgement when Thomson scored after 7 minutes with free kick. Two minutes later Murray ran through on the right and Gallacher headed a good goal from his cross. In the 47th minute Gurney increased Sunderland’s lead with a snapshot and 4 minutes later Gallacher took advantage of a miskick by Diaqne and scored with a shot from close range.

Then it was the visitors turn to score a picture goal. Berkessey put in an ideal pass down the middle for Viennaute to score a magnificent goal after 55 minutes. Twenty minutes later came the 2nd goal, the rugby goal! In between these two goals Yorston had scored with a long and oblique dropping shot that no goalkeeper should have missed.

A crowd of 10,000 saw Frances premier football club provide a bright exhibition of football which however was neither forceful nor skilful enough to beat a strong Sunderland team. Victory was gained without the expenditure of a great deal of effort. Had Sunderland finished their attacks strongly the score could easily have been in double figures. Although the match was only a friendly the French obviously decided that their football prestige was at stake and were determined that if beaten it would not be without a fight. As a result play was surprisingly hard and keen.

Sunderland great pull was at halfback. All 3 tackled strongly so that throughout the greater part of the game the French inside forwards were crowded off the ball whenever they got within shooting range. The French halfbacks were impotent by comparison with the home trio and showed little ability to dispossess a man of the ball or to feed their own forwards effectively. The visitors made the mistake of playing pretty football in the middle of the field. Had they fed the wings particularly Galley on the left more often, chances of getting goals would have increased materially.

Galley scored one of the best goals of the match though he was guilty of elbowing Murray vigorously off the ball but the referee did not see it. Sunderland crossed over with a 2-0 lead and although they scored 3 times in the 2nd half they were made to fight harder for these goals. The scorers were Gallacher (2), Thomson, Gurney and Yorston and for the visitors Viennaute and Galley.

The visitors were well served by Diaqne a cool full back and by centre half Berkessey. Goalkeeper Tassin made several spectacular saves but he let past him two shots that would not have troubled an average English league goalkeeper.