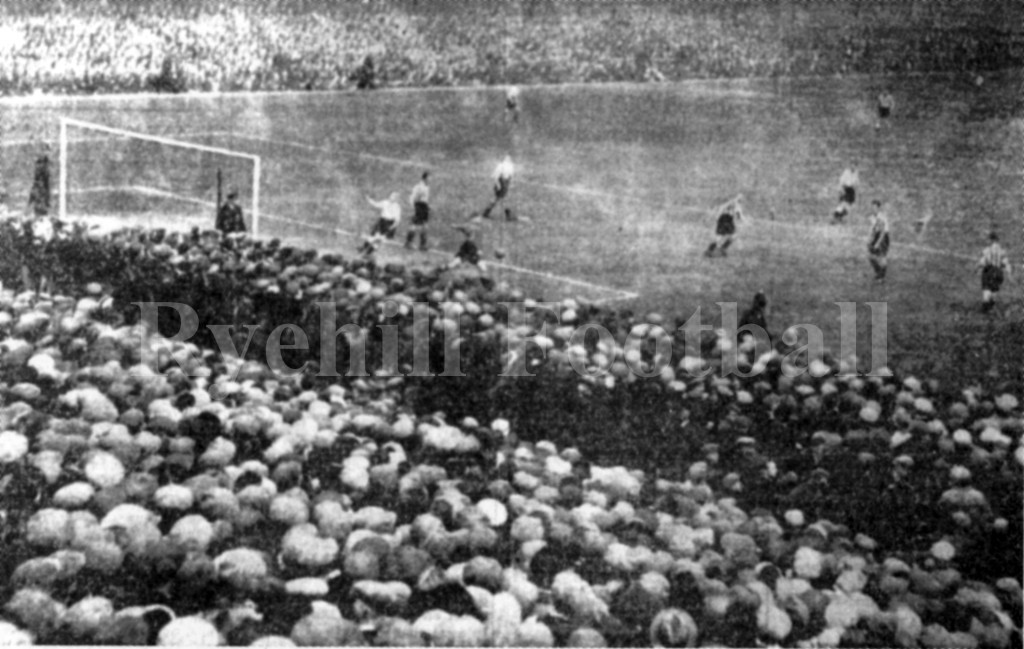 This game will be remembered for one reason, the crowd. A Sunderland record of 75,118 turned up for the game, and the game was lost 0 vs. 1. The gate was a midweek record for a match in England and produced gate receipts of £4,565.

As the crowd spilled onto the running track and climbed barriers the teams took the field 15 minutes after the advertised kick off to the music of the Durham Light Infantry Band. County won the toss and Sunderland defended the Fulwell End first half.

The combination play of Sammy Crooks and Dally Duncan was a constant thorn in Sunderland’s side.

Crooks incidentally was a Sunderland supporter, born in the Durham mining town of Bearpark. He would later go on to be PFA Chairman and was England’s second most capped player during the war years, after Arsenal’s Eddie Hapgood.

There was a temporary hiatus during the first half as the crowd encroached onto the pitch and not long after Sunderland looked to have taken the lead. A Connor/Carter combination at the Roker End made a chance for Davis, it looked a certain goal but the shot spooned over the bar. How Sunderland would live to regret that missed chance.

Yet more bad luck when after 25 minutes Bobby Gurney hit the back of the net, but inexplicably the referee, at first pointing towards the centre circle, then changed his decision to offside.

The referees’ decisions were now causing concern as everything appeared to be going against the red and whites, and shortly before half time Thorpe had to be sharp in front of goal to block a Sammy Crooks shot.

Second half and Crooks was now central to the game. Time and again his probing runs caused problems. After one Sunderland attack the ball went into the Fulwell End, never to return. A new ball was requisitioned.

Edgar was also doing some sterling work for The Rams on the left wing, but a worse problem followed mid way through the second half. A challenge on Gurney by Derby’s Barker left the Sunderland striker in agony, with what looked like a shoulder injury. He was led off, would return, but wasn’t his usual self for the rest of the game.

The game after 90 minutes was scoreless but in extra time the inevitable happened, Derby scored. Sammy Crooks, tussling on the wing, sent over an inch perfect cross, it was met be Ramage who headed it just inside the near post.

Roker Park was silent and the FA Cup dream was over for another year.

The effect of this defeat was stunning. In the last 12 league games we scored only 6 times. The team was shattered.