The Story Of The Sunderland Stadium Of Light – Part 2 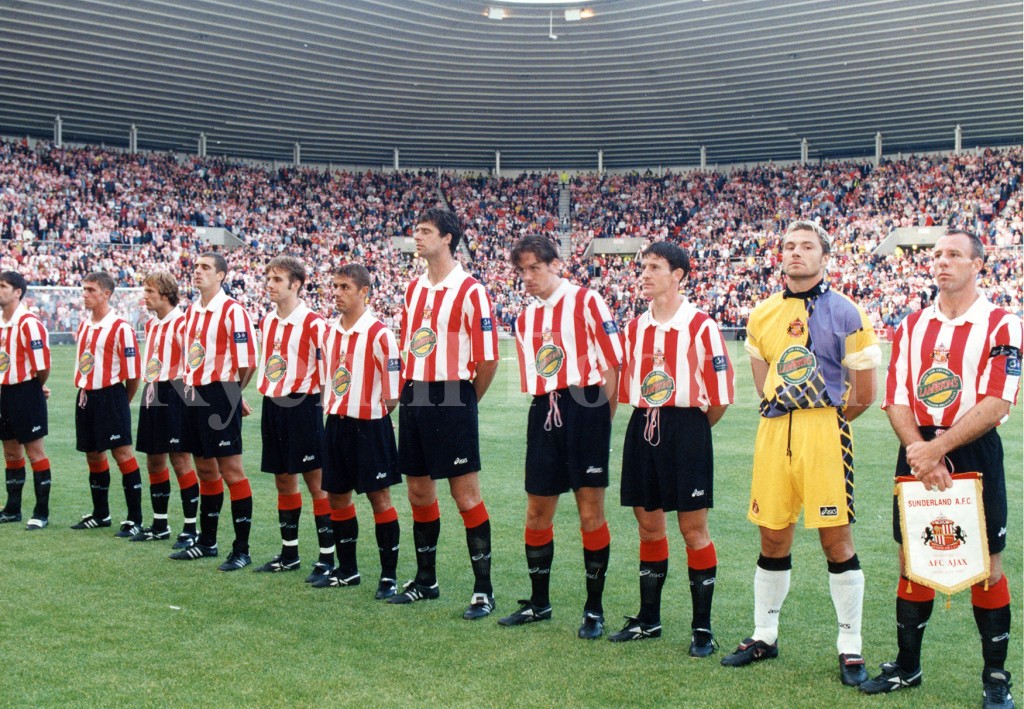 Supporters of Sunderland Football Club were given the opportunity to participate in a unique and historic scheme. The club had consistently promised fans affordable and accessible football offered supporters the chance to become a part of their new 41,600 seat stadium and leave a legacy for future generations to see.

Sunderland were the first football club to launch `A Brick in the Wall – Wall of Fame’ scheme for their new stadium. The commemorative brick campaign was been launched to appeal to loyal supporters who wish to literally cement their support in stone.

Sunderland AFC on Monday 17th March 1997 revealed that it would not take up residence in the Club’s new 42,000 seat stadium in the summer. In an ambitious move, more often associated with Europe’s top clubs, Sunderland’s commercial hub and ticket office operation was to be located in a purpose built, state of the art, £1 million office complex on Stadium Park.

This surprising and innovative decision to locate the Club’s offices away from the new stadium would enable the Club to expand and maximise its first class business and hospitality facilities within the stadium. It was the latest in a series of positive and unique steps announced by the Club.

The new 15,000sq ft offices were to be located close to the north east corner of the stadium, and was designed by stadium architects Taylor Tulip and Hunter to complement the design and finish of the West Stand.

Ballast Wiltshier, the contractors who are currently building the stadium, were already working on the office development to ensure completion in time for the opening fixture against Ajax on 30th July.

With the addition of the Club’s office development, the total cost of the stadium, car park and fit out increased from £15 million to £19 million.

On 19th November 1996, Sunderland Football Club announced the beginning of a new chapter in the Club’s proud history with the start of priority ticket sales for the new stadium.

On Thursday 20th March, officials cracked open the champagne to celebrate the Club’s achievement in advance season ticket reservations for the new stadium.

The Club announced that over 22,000, more than half of the available capacity of 42,000 seats in the new stadium, had already been reserved by Sunderland fans and corporate customers, or set aside for visitors. This figure included over 4,000 new season ticket holders.

The Club announced season ticket prices for the new stadium in June 1996 and had always stated that football at the new stadium would be accessible and affordable for all supporters, with seats starting at £99 for juniors and £199 for adults in the Family Enclosure.

By now, the 41,600 all-seater stadium was now over a third of the way complete (in fact one week ahead of schedule) and was due to be finished by the end of June 1997.

By now most of the stadium steelwork was in place, although work on the Main Stand’s impressive third tier had yet to commence. The player’s facilities located in the West Stand below ground level in line with the pitch were under construction.

Players’ facilities at the stadium were designed to meet Premier League and FIFA requirements and set a benchmark for other clubs.

Facilities included home and away dressing rooms designed and fitted out to the same specifications, a warm-up room, Coaches room and Manager’s office – Peter Reid was to have an office on the Executive Floor. New and unique facilities for the next Millennium also included a medical and drug testing centre, ball boys dressing room as well as male and female match official’s dressing rooms.

The East Stand, the equivalent of the Clock Stand at Roker Park, was, by this time the most advanced with all of the steelwork and pre-cast concrete in place. Work on the cantilever roof was expected to start in November.

The most important part of any football ground is the pitch and an investment of half a million pounds was to make Sunderland’s new pitch the best in the country. It was to be the same width as Roker Park at 68 metres (75 yds) but 2 metres longer at 105 metres (115 yds).

The first signs of grass were expected shortly after the seed was sown in early October. The pitch is the most technologically advanced in the country. Under the grass there were five layers of gravel, sand, soil and polypropylene fibres to anchor the roots firmly. Seventeen sprinklers can pop up through the grass, and more than a mile of drainage pipes was to carry excess water away.

For the first time Sunderland was have under-soil heating. Some 15 miles of 25mm pipes were to carry hot water through the soil. Sensors close to the roots will trigger a computer which will switch on the heating and can even telephone the groundsman at home to let him know the temperature has fallen. With technology like this postponed games were to be a thing of the past.

On 11 February 1997 Sunderland AFC announced that it had started to install the first seats at the Club’ new super-stadium. All the seats within the stadium were to be Sunderland red in colour, with the exception of where an image or lettering appears.

Commercial Director Grahame McDonnell and Club Secretary Mark Blackbourne had recently visited a European City to negotiate with a top side to play an opening friendly match at the new stadium.

Sunderland AFC were pleased to announce that negotiations with Ajax FC of Amsterdam, one of the top club sides in the world, had been successfully concluded and that the prestigious opening game at the new stadium was to be played on Wednesday 30th July 1997.

As part of the agreement between the Club’s both teams would be at full strength. Supporters could look forward to seeing Dutch international stars such as the de Boer brothers, Frank and Ronald, and Marc Overmars.

In reality you had to ask whether we could have chosen better opposition. This was as good as you get. The Dutch giants were truly top class opposition, famed throughout the footballing world for both their achievements on the pitch and their progressive training methods off it. The mere mention of them conjures up memories of the great Johan Cruyff, a living legend.

A spectacular line up of entertainment had been booked for the opening match.

Chairman Bob Murray stated that, “the match which celebrates the opening of the country’s biggest new stadium will be the first to be played in Sunderland’s magnificent new 42,000 all-seater home. It will mark the beginning of a historic new era for Sunderland AFC.”

The celebrations, crammed full of entertainment for all the family, not only included the Ajax match but also a star studded line up including live appearances from Status Quo who were flown especially to the stadium for the celebrations, the band F.K.A. Upside Down, Clock, Kavana and Code Red.

“The whole event will have a carnival atmosphere and will be a great party night for the City and the Club’s supporters” – Bob Murray added.

The Bishop of Durham would bless the stadium and the pitch.

The Story Of The Sunderland Stadium Of Light – Part 3