The Story Of The Sunderland Stadium Of Light – Part 1 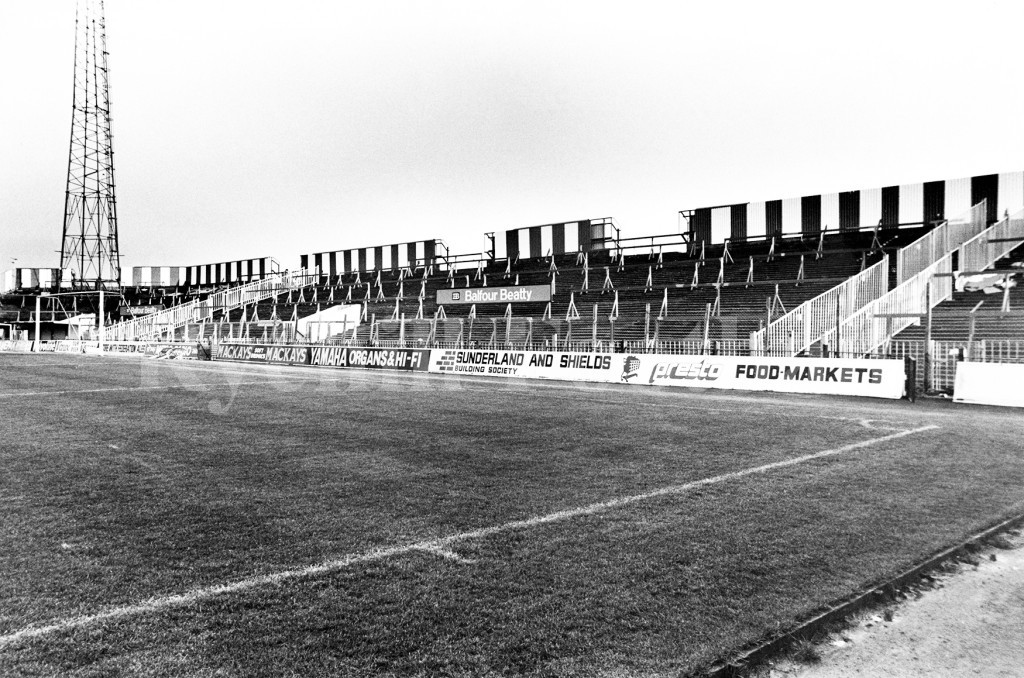 The Roker End, Much Loved But No Longer Fit For Purpose

After almost 100 years at Roker Park Sunderland moved into the biggest and most exciting new football ground in England. It was to herald the beginning of an important and exciting new era in the history of Sunderland AFC.

Roker Park was 99 years old before the curtain eventually fell on the spiritual home of Sunderland AFC. From 1898 it was witness to some of the finest football teams, players and matches in the United Kingdom. At its peak it held 75,118 people and could lay claim to being one of the most famous sporting arenas in the land. To put it mildly it was full of memories, for perhaps a million people. It will always be remembered with love and affection.

By the 1990’s however it was evident that the game of Soccer was moving into a new era. Whilst there was extensive debate on the subject of improving and up-grading Roker Park, the reality of the situation was that the Football Club could not realistically continue to maintain this near 100 year old facility.

Originally Sunderland AFC intended to move to a site on the A19, close to Hylton, however although the Club received outline planning permission in March 1994, this was immediately called in by the Department of the Environment for Public Enquiry, due to opposition from a major objector.

In hindsight the choice of a former Pit sight to re-locate to was apt. Sunderland AFC is as much a community as it is a big club, and through proposing to resite a mere few hundred yards from Roker Park it stood testament, in part, to the miners of the Durham coalfields, whose daily drudgery was alleviated by football.

The objective was to create for the Club and for the people of Sunderland, the best and largest new football stadium to be built in the UK. To achieve this objective the Club put together the best team of Architects, Surveyor, Engineers and Contractors available. A premier team with a track record of winning.

At the outset the stadium footprint was to be a bowl with a lower deck all around and a second tier over the West side of the ground. The bowl concept represented the optimum in stadium security, spectator comfort, ground circulation and would generate a tremendous atmosphere within the ground.

Specifically developed structurally to reflect the three main features of the Sunderland area – Glass Manufacturing, Shipbuilding and Coal Mining – it drew visual inspiration from these sources

Price Waterhouse are one of the top 5 Accountants in the world and were commissioned by the Club to produce a detailed feasibility study. The funding was to be achieved by a number of means:

·         Borrowing facilities of £3 million in the form of a Term Loan secured on the freehold stadium, owned by the Club

During construction it became evident that the original capacity of 34,000 had been an underestimate and on Monday 11 December 1996 Director Bob Murray revealed that Sunderland intend to seek permission for a 40,040 capacity at their new Wearmouth Stadium.

The decision to increase capacity was taken after consultation with the Stadium’s funding partners who have taken into account existing planning approval, set for 29,000 initially, increasing to 34,000.

This was a very important decision, although at the time we didn’t know how crucial. Crowds of over 40,000 would in time become common place and leave the football world staggered at the level and passion of the clubs support. Everyone connected with the football club already knew what they had backing them, but a whole new generation of football fans needed a demonstration. They would get their wish.

Sunderland AFC officials submitted the planning application for the 40,040 capacity. The Club hoped that there will be no time delay and work could begin on site in April 1996, following the Development Corporations lead in January.

The Club stated: “we cannot compromise at any stage – this is a stadium of European significance. We have taken a once in a hundred years decision and we have to think like a big city Club and build a stadium that is going to be fit for the 21st Century”. “The capacity increase will hardly come as a surprise to anyone following sporting trends – we want to compete at the highest level”, outlined Bob Murray.

The tenders for the Sunderland AFC super stadium were to be opened at The Football Trust offices in London on Friday 23 February 1996 at 2pm; it was announced on Wednesday 31 January.

The Club received 3 formal tenders for the construction of the Stadium and the Companies selected to tender were:

1.  Ballast Needham – who were involved in the building of Holland and Ajax of Amsterdam new stadium.

2.  Birse, whose current stadium experience includes the construction of the £18m, 25,000 seater stand for Manchester United.

On 11 March 1996 the Football Trust Offered £3.25m in grants and loan package towards the Wearmouth Stadium project. Offering a £2.5m grant, £250k from its FA Contribution Account and an interest free loan of stlg500,000, Peter Lee, Chief Executive of the Football Trust commented:

“One of the Taylor report’s major recommendations was for clubs to consider relocation as a way of solving the major problems associated with cramped sites and limited amenities. Relocation is a huge undertaking and Sunderland can count on the Trust for the maximum possible support. We commend the club’s far sighted proposals and determined approach to provide the highest standard of safety and comfort facilities for their supporters.”

“We have maintained a resolute belief that the relocation of Sunderland AFC was not only the most direct response to the Taylor Report, but also the way forward for the club.” “Football clubs must compete at the very highest level and for Sunderland AFC to enjoy a long term future we must have a stadium that can sustain growth.” “We are reliant on the support and understanding of many organisations and institutions to help us fulfil our dreams, not least the Football Trust.”

On 27 March 1996 the board of Sunderland AFC selected Ballast Wiltshier plc, part of the leading international construction group, Ballast Nedam NV, as the main contractor for its all-seater stadium at the former Wearmouth Colliery site in Sunderland.

Notably Ballast Nedam NV were currently constructing the new 52,000 seater Amsterdam Arena, which was finished that summer. The arena is home to Dutch football giants, Ajax, and was to be the first football ground in Europe to feature a sliding roof and car parking beneath the pitch.

On 26 April 1996 the Board of Sunderland AFC gave construction company Ballast Wiltshier the green light to begin work on their new stlg15 million 40,000 seat stadium at a press conference on Thursday, April 25th 1996 on site at Wearmouth Colliery.

Ballast Wiltshier were scheduled to begin work on the stadium on Wednesday, 15th May 1996.

On 1 July 1996 it was announced that NWS Bank plc, a subsidiary of the Bank of Scotland, would inject stlg6 million into the funding of Sunderland AFC’s new super stadium which is being built on the former Wearmouth Colliery site in Sunderland.

NWS Bank plc, which has its headquarters in Chester, is one of the largest and most profitable finance groups in the UK with assets of over stlg4 billion.

The Story Of The Sunderland Stadium Of Light – Part 2