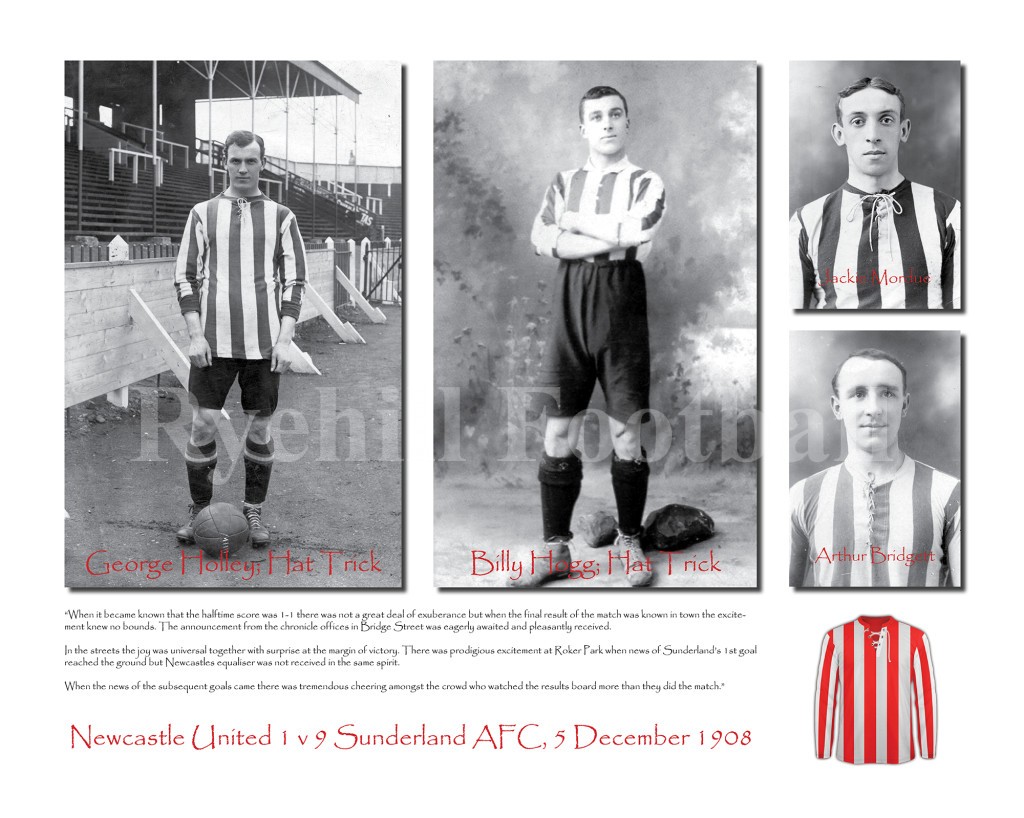 It is as well for football that such one-sided exhibitions as that which marked the meeting of these old rivals at St James Park are rare. There was such a marked difference in the performance of the sides that one might be pardoned for thinking that Newcastle are a club who have never played league football. They were hopelessly weak in the 2nd half and were absolutely unable to stem any of the brisk attacks that invariably brought a goal for Sunderland. “How did it happen?” was a much asked question.

Many of the spectators who made up a record crowd at St James Park would no doubt prefer to say nothing as to the cause. Certainly  there were many thereabouts who gave out theories and many excuses but perhaps the real reason for such a trouncing, the heaviest ever suffered by Newcastle, is that the United players were much too light for the heavy aggressive Rokermen. It is easy to be wise after the event but it is now very evident that it was a mistake to play the same eleven that beat Nottm. Forest though on form there was every justification for doing so.

With home halfbacks never able to cope with the keen thrusting Roker attack and with the home full backs overworked the repeated downfall of the Newcastle goal was hardly surprising. Perhaps with the train of events so adverse Newcastle lost heart and aimlessness was a natural consequence. Surely no league team has ever had such a thrashing and even granted that several of the home players were the worse for wear at the interval this does not account for Sunderland’s great success. Long before the finish Newcastle were pooped out and every man was quite at sea.

Sunderland played rare football but then it was comparatively easy for they had no one to beat. The goals that were scored were without exception delightful examples of marksmanship and Lawrence was unable to touch any of the shots that beat him. Up to halftime the crowd got value for their money with a keen and fast game. The 1-1 score was a true reflection of the play. Nothing good can be said of the 2nd half so far as United are concerned and nothing but praise for Sunderland’s excellent all round display. Receipts were a record for the ground as was the attendance.

The game opened with the characteristic dash of a Newcastle-Sunderland game. Barely had Whitsun checked Bridgett than Gosnell and Wilson were harassing Foster at the other end. The first really dangerous attack came from United with Shepherd failing to get in a shot from inside the penalty area. The ball broke to Duncan whose effort went over the bar. Early on Hogg and Mordue were giving Pudan a lot of work but the defence was steady and held out until the 7th minute when Hogg scored. 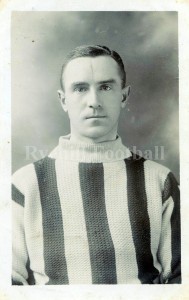 Sunderland goalkeeper Roose, almost unemployed that day – he walked off with the match ball at the end of the game

Mordue beat Pudan and Lawrence running out left the goal unattended. Hogg’s task was easy and gratefully accomplished to the joy of the Sunderland contingent in the crowd. The Sunderland goal had a lucky escape almost immediately afterwards when Higgins worked the ball up and crossed. Gosnell raced into the goalmouth only to be baulked by Roose who judged the flight of the ball cleverly and intercepted. Newcastle persisted and the Roker goal was in danger for a long time. Roose and his fullbacks were cool and clever and gradually beat off the attack but not before Shepherd had gone close.

Liddell and Whitsun were holding the Sunderland left wing in a way that must have been very encouraging to United but the long shots fired in by all the visiting forwards were a source of trouble. Liddell almost deceived Roose with a long drive and when Thomson dumped Shepherd on the ash track a free kick was hardly compensation for a bad foul. Shepherd was off the field for a few minutes but when he returned to the fray he was as aggressive as ever. Liddell was never the same after receiving a knee in the chest whilst Whitsun resumed limping after being hurt.

Willis drove a free kick into Roose’s hands and with dash and long passing being the order of the day there was always something of interest going on. Hogg dallied when faced with an open goal and Willis spoiled his intentions. Just before the interval Newcastle got on terms when Thomson handled in the penalty area though the referee consulted a linesman before awarding the kick. Shepherds kick was successful and a rousing and even half ended all square. Newcastle promised great things on resuming as they attacked but their shooting was not to be commended.

It was obvious that Whitsun was not at his best for he was limping and Liddell was much less effective. Bridgett and Holley broke away and Holley beat Lawrence with a long clean drive. Before this however the United defence had shown some erratic tendencies and when Hogg received from Mordue and scored after beating Pudan easily Newcastle’s fate was sealed. The halfbacks completely cracked up and the defence was as poor in stemming attacks as the forwards were at initiating them.

Duncan was never able to beat Milton at any stage of the game while Gosnell was neglected by Wilson. Shepherd and Higgins showed their old fault of fiddling too much. It was all Sunderland and the goals began to pile up almost as quickly as it took to write about them as Newcastle fell to pieces. There was much similarity about the goals. One or other of the wings would take the ball up and beat the halfbacks with consummate ease and then flash the leather out of Lawrence’s reach and into the net. 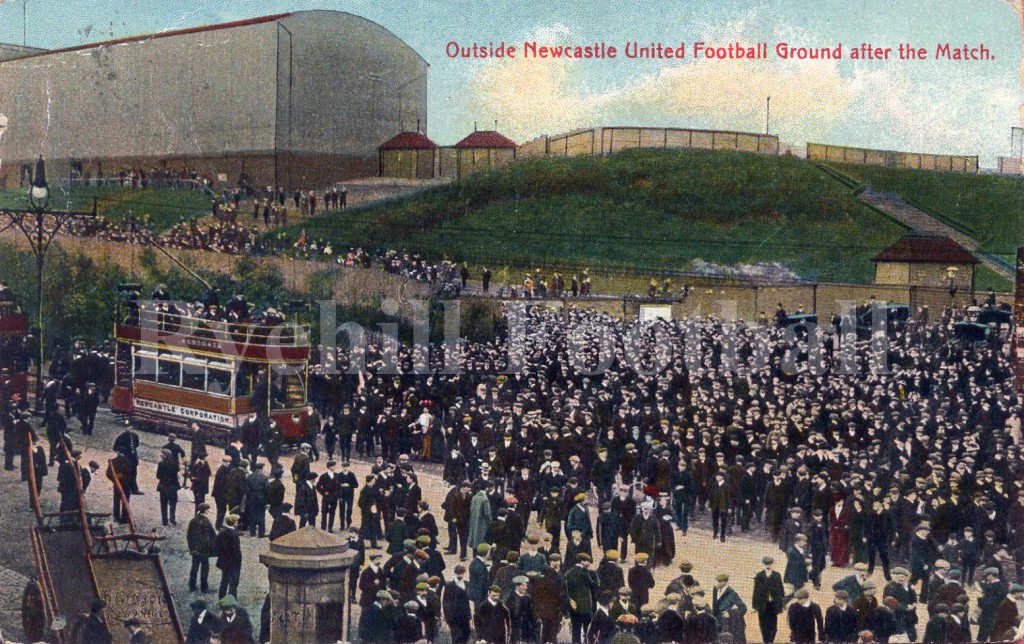 Thus it was that Holley scored the 4th and 5th goals, Bridgett the 6th and 7th, Mordue the 8th and Hogg the 9th before a cease fire was called. Whitsun left the field after the 6th goal and Veitch went to full back with Higgins at halfback. Roose was a mere spectator of Lawrence’s discomfort at the other end. It was a welcome relief when the final whistle sounded but before it did hundreds had already left the ground. Duncan was knocked cold and had to be carried off. It was not a pleasant sight in the 2nd half and one could not help wonder whether fate had been kind to the thousands who were unable to gain admission.

Several of the Sunderland players were badly knocked about during the match and Thomson, Low and Milton all required medical treatment that night. Milton was in bed all the next day. Thomson and Low were severely kicked and Daykin was laid out for 2 or 3 minutes after a nasty blow in the mouth. On Wearside there was only one topic of conversation and that was the great match at Newcastle. At football grounds all over the district spectators showed intense interest in the course of events at St James Park.

When it became known that the halftime score was 1-1 there was not a great deal of exuberance but when the final result of the match was known in town the excitement knew no bounds. The announcement from the chronicle offices in Bridge Street was eagerly awaited and pleasantly received. In the streets the joy was universal together with surprise at the margin of victory. There was prodigious excitement at Roker Park when news of Sunderland’s 1st goal reached the ground but Newcastle’s equaliser was not received in the same spirit.

When the news of the subsequent goals came there was tremendous cheering amongst the crowd who watched the results board more than they did the match.

Still the biggest away victory in the top division in Football League history, the win was even more remarkable as Newcastle were league champions that season winning the title by 7 points from Everton, conceding only 41 goals all season. Sunderland ended up 3rd. Roose the Sunderland goalkeeper walked off with the match ball – probably one of the only times he saw it that day! The whereabouts of the match ball is unknown.