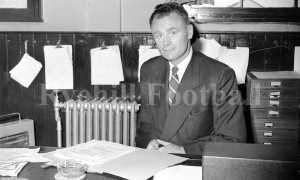 Following the Fulham game on 28 October 1972 and a run of just 1 win in 8 games both Alan Brown and Sunderland AFC came to a conclusion that it would be best for all concerned if they parted company.

Alan Brown’s second spell at Sunderland that started on 9 February 1968 came to an official end on Wednesday 1 November 1972. In that time the 219 competitive games (League, Cups and Anglo Italian competitions) had brought just 63 victories compared to 88 defeats.

Looking back through his tenure it would perhaps be easy to say that a poor October in the league had tested the Directors patience but in truth wasn’t Brown the victim of the clubs general malaise at that time? Sunderland AFC were struggling financially; and strapped for cash Brown had little choice but to lay the platform for progress through a well thought out Youth structure.

The 1972/73 squad to date had featured a plethora of talent discovered by the club’s scouting network and nurtured by sound coaching. Some of Brown’s players would go on to become internationals or become stalwarts of established top flight sides. Brown had grossed a six-figure sum for Sunderland in sale of “his” youth products in the 2 years leading to his departure.

Nevertheless it appeared evident that the club was going nowhere fast and with crowds plummeting the Directors not only came to the inevitable conclusion that change was required but Alan Brown did too. It was Brown who spoke with Messrs Collings and Ditchburn about a parting of the ways on the evening of the 31st October and morning of 1 November 1972. The Sunderland Echo through Argus broke the news just hours later. Ironically Sunderland AFC had spoken to Brown as recently as the March of 1972 about a new contract with his current 5 year contract up for review.

The departure of Brown brought to an end a turbulent 6 days for Sunderland AFC that had seen them lose not only their Manager but also several changes to the club’s administration including the resignation of long standing Board members Stanley Ritson and Jack Cooke. The Sunderland Echo commented as follows on Brown’s shock exit:

“Mr Alan Brown’s decision to part company from Sunderland Football Club will be welcomed by his critics of whom he has more than his fair share. But those with the interests of the club at heart will be sorry to see him go.

Twice he has come to Sunderland’s rescue to face the task of reviving the club’s fortunes at a time when they were at a low ebb. If the team has failed to make much headway this season what must not be overlooked is that Mr Brown has had to rely upon the same talent which took Sunderland into 5th place last season. Nor can Mr Brown’s contribution to the club finances – in two years £200,000 has been received in transfer fees – be ignored. In that same period no money has been available to buy players. Perhaps Sunderland has been guilty of undervaluing his services”.

By Friday 3 November 1972 a game of “guess the new Sunderland AFC Manager” was in full swing.

Jack Charlton of Leeds United was the early favourite at 6 to 1. Len Ashurst, then Hartlepool’s Player Manager was also in the frame, allegedly. Len Shackleton and then Derby County boss Brian Clough were some people’s tips to make a return to Wearside and smart money was being placed on Billy Bingham to ditch the Greek National Team job for Sunderland AFC.

Chairman Keith Collings had emerged from a marathon Board meeting on Thursday 2 November to announce that the position would be advertised. He was quoted as saying:

“I think it is a plum job and we are prepared to pay a good salary. This is a club with fine traditions and the manager has always had free scope”.

Ironically, given what would transpire, he indicated that there would be no question of approaching managers already under contract with other clubs, “we would expect anyone interested in the job to make application to us”.

Sunderland would be in competition with another club for a new manager as co-incidentally Dave Mackay had resigned as boss of Swindon Town on the same day that Brown announced his departure from Sunderland AFC.

Collings confirmed that the Board of Directors had decided to put trainer-coach Billy Elliott in complete charge of the playing staff for the time being. 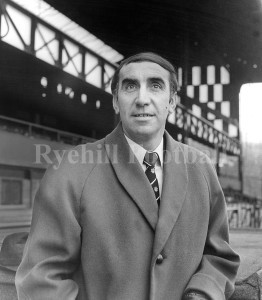 With just 1 win in 11 competitive matches the Directors of Sunderland AFC were keen to finally end the search for a new manager. On Monday 20 November the target was made public, Bob Stokoe of Blackpool.

The Lancashire club, specifically Frank Dickinson the Chairman, had been approached by Sunderland to talk to Mr Stokoe the day before. The request was to be formally considered by The Tangerines Board on the Monday afternoon.

Stokoe had a three year contract at Bloomfield Road that was due to expire in January 1974.

An interesting point of note on Monday 20 November was the draw for the second round of the FA Cup. Notts County had been drawn at home to Lancaster City, whilst Reading would play Hayes at Elm Park. This was of course and at the time, of just passing interest to Sunderland fans but the results of the aforementioned ties would impact upon Sunderland and its history within a matter of weeks.

On Thursday 23 November it was announced that Bob Stokoe, born Mickley in Northumberland, had been appointed as the new Manager of Sunderland. He would officially take up his position at Roker Park following Blackpool’s Football League Cup Quarter Final replay against Wolverhampton Wanderers the following Tuesday.

The negotiations on the part of Sunderland AFC had been conducted by Chairman Keith Collings and Vice Chairman Jack Ditchburn. Stokoe had not joined the negotiations until the latter stages, presumably when personal terms were spoken about.

Mr Collings was quoted as saying, “I haven’t much to say at this stage except that it was an amicable meeting and we are quite happy about everything. I don’t want to go into too much detail and I would rather leave any statement until after Mr Stokoe is actually with our club”.

Sunderland AFC had their Messiah. The fortunes of one of England’s most famous club’s was about to be turned on its head.