1937 – Sunderland AFC Board of Directors 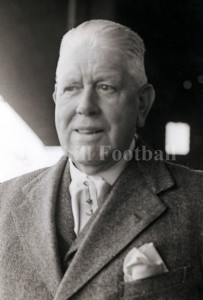 At the time of the 1937 FA cup win there were some very high profile people on the board at Sunderland AFC. Here we focus on the men in charge:

Took over as chairman after the untimely death of William Henry Bell in 1930.

Perhaps his biggest disappointment in football was that illness prevented him from being at Wembley to witness Sunderland lift the 1937 FA cup. Raine was better known in both the political and commercial world, he was the “towns” Mayor and also MP in the 1920’s. Knighted in 1927 he was also active in the Methodist faith, although rather curiously remarried his wife Lady Raine.

His good wife represented him at Wembley in 1937, although due to the fact that it was not “customary” to allow women into the royal Box, she had to sit behind the enclosure.

Vice chairman of Sunderland AFC, white was educated in Germany and was a keen sportsman, having played centre forward for Southwick in the Wearside League.

He was heavily involved in his fathers Building Contractors business, indeed after a dispute between Sunderland AFC and the original contractors it was he who finished off the Roker End. White was the man responsible for much of the Roker Park redevelopments prior to the Second World War and in truth financed most of it himself.

He was the clubs largest debenture holder, but his good deeds often went unreported such was his nature.

Known as “Mr Sunderland”, Taylor was one of the most famous men ever in the history of Sunderland AFC Boards.

Originally a rugby fan, he was associated with Ashbrooke RFC, this man was originally elected as a director in 1897. After 16 months he “retired” after a disagreement regarding Board meetings – he was not happy that they took place on licensed premises!!

On the retirement of James P Henderson he returned, and in 1904 assumed the role of chairman after the McCombie affair, elected by the shareholders to replace Sinclair Todd.

His hobby was “dogs” and was a keen breeder of Bulldogs; at one time he owned 80 of the breed. A personal tragedy unfolded when 3 of them were suffocated in a railway carriage on the way to be exhibited by the Kennel Club in London, it was estimated that the unfortunate animals were worth £1,250. He also had an aviary of foreign birds.

By the time of the 1937 FA cup Final, Prior was 60 years of age and had served the Sunderland board for 18 years. Such was his fame and popularity; wherever Sunderland AFC went the question “have you not brought the colonel with you” was never far from peoples lips.

He was a true sportsman, and always had a happy smile on his face but was fiercely partisan where Sunderland AFC was concerned. Known as a man with a big heart he once told the story of how he went to Scotland with them manager Robert Kyle to buy a player and came back with a horse!  He was loved by both the “bob enders” at Roker Park and his ex-servicemen, and boasted that he had never seen a doctor since he was a child.

His father was a well known haulage contractor, although he principally made his name in the Boer War, fighting with the Northumberland Yeomanry, and again in the First World War where he commanded a battalion of the Tyneside Irish.

Quite simply a Sunderland fanatic. Having watched the team since being a boy in the late 1880’s he had probably been to more of the clubs home and away matches than anyone else alive. Originally a season ticket holder, when they were priced at 7 shillings and sixpence he had a virtual photographic memory of Sunderland games, and often voiced his controversial opinion.

It was difficult to know whether or not this bloke was pulling your leg, such was his brilliant dry humour.

Always seen with a flower in his buttonhole he was every inch the Victorian gent. Began as a grocer and eventually gave his profession as an “Italian warehouseman” he remained a bachelor all of his life.

As much a player as the players themselves, was a good way to describe the doctor, with a fanatical support of them.  Was often ribbed about the way in which he conveniently arranged his physicians meetings to co-incide with Sunderland away games he became a director in 1923.

The name of William Edward Ditchburn will always be synonymous with the “scandal” which rocked the club to its very foundations, a sad legacy for such a devoted fan. Even though he was a wealthy man he often stood in with the “bob enders” for the camaraderie.  He was a keen judge of a footballer, knowing instinctively “when to buy” and “when to sell”. Associated with Hendon Cricket Club for many years.