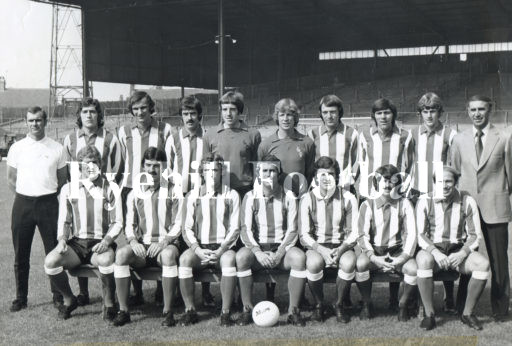 By the 1975/76 season Sunderland fans craved top flight football, and they would be rewarded. Top spot was justified as Sunderland remained unbeaten at Roker Park, with 19 wins and 2 draws. Strangely enough the dropped points came in 1 v 1 draws with both Bristol teams.

A couple of huge attendances were witnessed as Sunderland amassed 56 points; the best since promotion in 1963/64.

The season started with 4 victories, 3 at home, scoring 10 goals in the process. The first game at home had witnessed crowd trouble in the Roker End against Chelsea in those heady Clockwork Orange days. With no segregation and the away fans arriving late it was a recipe for the mayhem that followed. There were no defeats until 18 October at bogey ground Eastville. In November there was a set back. Sunderland travelled to the Valley and Billy Hughes broke his leg. He would be sidelined for 4 months, by which time he had well and truly lost his place. The only real reverse of any note was at yet another bogey ground; Southampton, where Sunderland suffered a 0 v 4 hiding, a game covered by Match Of The Day. By the turn of the year Sunderland were flying and the last 18 games would produce only 4 defeats.

Promotion was secured in the 40th game of the season, The Easter Monday clash with Bolton Wanderers. The game attracted 51,983 supporters and the weather was beautiful, in fact everything was perfect. With Bolton including a very young Peter Reid, he who would go on to manage Sunderland some 20 years later, Wanderers came for a game. Towers and Robson gave the Lads a 2 v 0 lead before Wanderers pulled one back. It was nail biting stuff, and when Monty was injured in the second half at the Roker End there was a hush.

The last game of the season clinched the championship trophy with a 2 v 0 defeat of Portsmouth. Joe Bolton, who had his shooting boots on that day scored a rasper. The average crowd was nearly 33,000, easily the best in the division by some 12,000. If anyone deserved promotion then it was the famous Roker Roar; they had been magnificent.

The FA Cup had provided highlights and big crowds as well. It all started fairly tamely with two home victories over Oldham and Hull City. Sunderland crept into the 5th round and faced Stoke City at the Victoria Ground. With 41,176 at the Potteries, including a massive contingent from Wearside, an exciting 1 v 1 draw was witnessed and the Roker Park replay eagerly anticipated. A stunning 47, 583 turned up to will the lads onto a 2 v 1 victory and the right to play 3rd Division Crystal Palace in the last 8. With Newcastle United playing at Derby County that day there was every chance of a North East semi final but alas it wasn’t to be, as both went out.

The game on Wearside saw the Eagles manager Malcolm Allison come out before the match to wind the Sunderland fans up. Unfortunately for him his Fedora hat was dislodged by a snooker ball thrown from an exuberant fan at the Fulwell End. Still with a Gypsies good luck message carried from round 3 Palace needn’t have worried. An Alan Whittle goal settled a tense affair in front of 50,850. Bob Moncur, as if to emphasise the Eagles’ good luck, saw a shot rebound back off the woodwork. The combined attendances for the 4 FA Cup games were almost 160,000.

Following a superb 4 v 1 rout of Hull City at Boothferry Park Sunderland made their way back home knowing that an Easter Monday victory over Bolton Wanderers at Roker Park would see them promoted.

The weather was glorious, the crowd massive. I remember taking my place in the Roker End Children’s Enclosure with my sister Kathryn. My Father was standing just behind the red fence that separated this part from where the adults stood. We both marvelled at the build up from 1.30pm as the atmosphere and the sheer volume of support grew. You sensed it was to be a special day.

The game started poorly with both teams clearly nervous; not surprising on Sunderland’s part with so much at stake. However as the first half wore on the home side were in the ascendancy with Mel Holden and Ray Train giving the visiting players plenty to think about. The latter twice set Pop Robson up, but Barry Siddall in the Bolton goal was equal to the on target efforts.

However after 31 minutes Tony Towers set The Black Cats on their way with a beautifully taken penalty after Greaves had brought down Train. The crowd were slightly aggrieved at the spot kick being awarded as Bobby Kerr had hammered the ball home after Train was brought down.

Five minutes later Willie Morgan was booked for a foul on Joe Bolton and the resulting free kick led to Sunderland’s second and decisive goal. A lovely strike it was too as a quick build up on the right wing saw the ball played to Kerr who sent a low cross skimming across the box, neatly into the path of Pop Robson who steered the ball home.

The second half was an even contest with both sides having chances. The Roker Roar did have their heart in their mouths a couple of times, once when Jimmy Montgomery was injured and needed treatment and then just 12 minutes from time when Bolton scored through Allardyce who beat Monty all end sup with a firm header following a good cross from Morgan.

However the day belonged to Sunderland and on the final whistle the fans swarmed onto the pitch to acclaim their heroes. Sunderland were back in the top flight!

I remember coming home from this game and hanging my Stokoe’s Stars banner out of my bedroom window. It was my first taste of any sort of success with Sunderland. This match remains to this day a firm favourite with me. 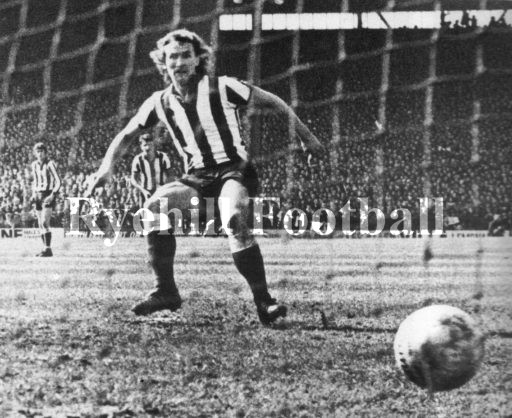 Tony Towers scores a penalty v Bolton Wanderers to help us to promotion. Note the massed ranks of The Fulwell End.

Tony Towers was born in Manchester in 1952 and made his debut for Manchester City in 1969 appearing in their 1970 Cup Winners Cup run. After making 122 appearances for his hometown club, including an appearance in the 1974 League Cup Final, he made his way to Wearside in the Summer of 1974, in a deal that saw Dennis Tueart and Micky Horswill move in the opposite direction. He settled into a tough tackling midfield role, although he also had a touch of class to go with the more physical side of his game. Very popular with the Sunderland supporters’ his performances attracted the attention of the England Manager and he was capped in 1976. After more than 100 first team appearances he left for Birmingham City in 1977 for £140,000.