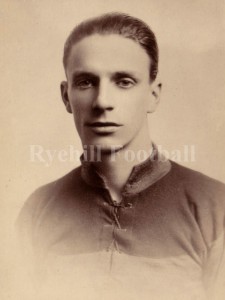 Arthur Robert ‘Tricky’ Hawes was born on the 2nd of October 1895 in Swanton Morley. An inside left/forward, he remains to this day one of the more accomplished professional footballers to hail from Norfolk, though circumstances dictated that Norwich City were unable to benefit beyond one competitive season. He left the service of the club far too early, and went on to be a good operator at the highest level of English football. Known more as a nabber of chances as opposed to being a prolific scorer, he was talked about by virtue of the fact that he always carried a handkerchief in his left hand whilst playing.

His father, also called Arthur, was assistant trainer with Norwich for over twenty years. Having attended the Thorpe Hamlet School, the First World War arrived at the end of Tricky’s teenage years, and after playing for local sides CEYMS and Boulton & Paul, and representing Norfolk County, he turned out for the Canaries during the conflict in friendly matches, almost entirely against teams from the armed forces. He found the net 79 times, including seven hat-tricks, suggesting he found the standard rather easy.

When peace arrived, and the club set about re-establishing itself, he became a regular fixture in the City side for the 1919-20 Southern League campaign. Tricky played up front alongside Jack Doran, Sam Jennings, and James Broadhead. The Canaries did well enough in that first season back – a mid table existence with Hawes playing in 36 of the 42 matches, scoring eight goals. His début came on the 30th of August 1919 when he scored in front of 7,000 people at the Nest in a 4-1 victory over Newport County. And the next time he played against Welsh opposition, he netted his second, in a 4-0 thumping of Merthyr Town in October. Two weeks later, a brace followed against Bristol Rovers and Tricky was well and truly up and running, and showing he had excellent skills on the pitch. But he was a very early example of a player destined for higher things – one that Norwich City were perhaps never going to keep hold of.

In early 1920, Doran (who was a real sharpshooter) departed for Brighton & Hove Albion. This wasn’t long after City had suffered a 5-0 drubbing at Darlington in the FA Cup. Much was happening at the club, and in football in general. There was talk that Norwich and the rest of the clubs in the Southern League could find themselves being admitted to the Football League for 1920-21. And all over the country, there was plenty of negotiating going on between clubs and players as they all looked to steal a march on one another. Tricky’s final match in City colours came on the 1st of May 1920 in a 1-0 defeat at QPR. Just a week later he was no longer a Norwich player. South Shields, who in the season just finished had played in the Second Division of the Football League, swooped for the hot prospect. In those days they had more to offer for an ambitious footballer, and they took Broadhead as well as Hawes in a double swoop (though Broadhead’s switch did not in the end prove successful).

For Norwich it was a case of having to start all over again as they began their Football League existence – something that proved highly difficult as they mustered only four goals in the first ten games. How they could have done with Tricky ! His move to the north-east was a success. He stayed with South Shields for eighteen months scoring 18 goals in 52 appearances as they finished 8th in Division Two in 1920-21 and two places higher in 1921-22. Hawes however did not see that second season out. In December 1921, First Division Sunderland identified him as a player with class, and paid their local rivals £1,750 to secure him to Roker Park.

Tricky soon established himself in the top flight. The day after his arrival, he made his debut for Sunderland against West Bromwich Albion. The match ended in a 5-0 victory, and he scored two of the goals. This was a good Sunderland side, and his days in Norfolk and at the chalk pit in Rosary Road must have seemed a long way off. The Black Cats went on to finish as Division One runners up in 1922-23 with Tricky scoring twelve times and soon becoming a much admired player. Between then and his final season with them in 1926-27, Sunderland finished third on three other occasions. He failed however to trouble the scorers in any of his last fourteen starts, with his final goal coming in April 1925.

In the summer of 1927, Hawes left Sunderland (after 139 league appearances and 39 goals) and dropped down to the Third Division North with Bradford Park Avenue. Though in his early thirties by this time, he had lost none of his neat skills, and in a two year stay, he found the net 17 times in 53 games. The Yorkshire club won the title in the first year, and followed that up with a third place finish in Division Two in 1928-29. His departure in July 1929 however saw the continuation of his nomadic existence (apart from that reasonably long stint at Sunderland). He had a year with Accrington Stanley, again in the third tier, that brought nine goals from 39 starts. And then another single season career, this time with Nelson where he netted on four occasions in what would be their last year as a Football League club. He had shorts spells thereafter with other northern non-league outfits, either side of a brief association with Rochdale, again in Division Three North.

After his retirement from the professional game he returned to Norfolk and worked for Laurence & Scott. He had many years as a trainer and later Vice Chairman for their excellent team Gothic FC.

Arthur ‘Tricky’ Hawes was, as far as the Canaries were concerned, a player they would have loved to have seen more of in a yellow shirt.

He passed away on the 11th of October 1963 in Norwich, just nine days after his sixty eighth birthday.

One thought on “Arthur “Tricky” Hawes”