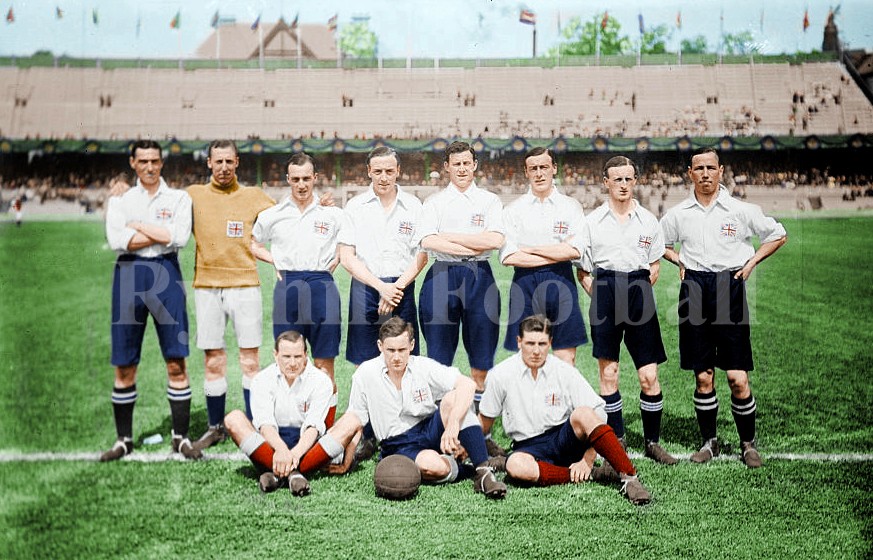 Many football fans will look upon the Great Britain Olympic football team as something of a novelty. The last time we entered a team in qualifying was in the of the 1972 competition. Those finals were played of course in Munich in the then West Germany, with that summer event over shadowed by the Palestinian Black September Group’s massacre of members of the Israeli delegation.

Great Britain first entered a team in the Summer Olympic football tournament in London 1908, won the gold medal and then subsequently won gold again in Stockholm in 1912. All in all GB has appeared no less than 8 times in the tournament.

For Sunderland fans the name of Ronald Brebner might not resonate but he appeared as a goalkeeper for The Black Cats in 1905 and went on to become an Olympic football Gold medallist when the GB defeated Denmark 4 v 2 in the final played at Stockholm’s Olympiastadion.

Vintage contemporary photo of the England / Great Britain football team which won the Gold Medal at the 1912 Summer Olympics in Stockholm, Sweden. The team beat Denmark 4 – 2 in the final on July 4 at the Stockholm Olympiastadion in front of a crowd of 25,000 people. The International Olympic Committee (IOC) credits “Great Britain” as the winners because the United Kingdom of Great Britain and Ireland competed under that description at the Games. The Football Association, however, who organised the team to represent the UK, credits the win to the “England” national amateur football team rather than a British team. Official IOC records name the 11 players in the team who won the final as: Forwards – Ivan Sharpe, Gordon Hoare, Harold Walden, Vivian Woodward, Arthur Berry; Half-backs – Joseph Dines, Henry Littlewort, Douglas McWhirter; Backs – Arthur Knight, Thomas Burn; Goalkeeper – Ronald Brebner. Their respective positions in the team photo is unknown.

Many years later the ensuing controversy over whether to enter a GB Olympic football team became shrouded in footballing politics. The general thought process was and is that this might endanger the separate status enjoyed by the Home Nations within FIFA. However a catalyst for the withdrawal of a GB team post 1974 came when the Football Association stopped recognising a distinction between professionals and amateurs, with all players subsequently registered simply as ‘players’, whether paid or unpaid. This ended the existence of the England national amateur football team, which had always been the basis for the British Olympic team.

FIFA in time subsequently muddied the waters with the effective abolition of the amateur Olympic rules and in 2012 Team GB tested the FIFA political waters by playing its first Olympic football match since 1971. The story surrounding the events of 1971 have been lost in the intervening 41 years and a retelling of events once more introduces the reader to Sunderland AFC.

To qualify for the 1972 finals FIFA organised a qualifying tournament that took place between March 1971 and May 1972. It was organised similar to the world cup tournament with games organised in confederations. In Europe the first qualifying round pitted the amateurs of GB against their counterparts from Bulgaria. Given that the Iron Curtain still existed at that time and that all of their sportsmen were notionally classed as amateurs this was bad luck for Team GB who would effectively play Bulgaria’s full international side.

In order to prepare properly for the two qualifying matches against the Communists GB played a series of friendly games against teams from Ireland, England and Scotland, the first of which took place in November 1970 when GB travelled to the Manor Ground to play Oxford United, a game that GB won. All in all a further 8 matches were played prior to the first leg, including a game in Belfast against an Irish Select XI, with mixed results.

The first leg between GB and Bulgaria took place at Wembley Stadium on 24 March 1971, a game that GB, against all the odds, triumphed 1 v 0.

The Bulgarians had arrived in London expecting to play against the likes of Moore, Hurst and Charlton, but much to their disappointment they faced instead players from Hendon, Slough Town and Skelmersdale United. The win for GB was literally football giant killing!

Buoyed by their victory GB then played another two friendly matches, the first took place at Roker Park on 19 April 1971 where a strong but youthful Black Cats side defeated GB 3 v 2. Sunderland were 2 v 0 up within 21 minutes with goals from Lowery and Lathan, but the GB team struck back with 2 second half goals from Adams and a penalty by Day to draw level. With just 3 minutes to go great work from Dick Malone saw the Scotsman set up the winner for Sunderland legend, Ian Porterfield.

A newspaper report of the day stated that “the absence of severe tackling allowed players on both sides to express themselves” so perhaps a gentleman’s agreement was reached on this prior to the game.

The final friendly game for GB was at Fir Park where they again lost, this time 1 v 2 to Motherwell, before they travelled to the Vassil Levski Stadium, Sofia only to be crushed 0 v 5 and eliminated from the competition 1 v 5.

Bulgaria themselves didn’t go much further in the competition. In a second qualifying round, organised in groups, they failed to progress beaten into second place by Poland. The Poles had a tremendous team that would not only and subsequently go all the way the following year in Munich, winning the Olympic football gold medal, but they would also famously knock out England from the 1974 World Cup finals qualifying tournament with a team that included the likes of Deyna and Lato.

Ironically the final 4 in the Munich Summer Olympics were all communist countries; The Soviet Union. East Germany, Poland and Hungary.

The footballing landscape has of course changed dramatically since the early 1970’s but politically perhaps not so much. There is talk of Team GB entering the Olympic football tournament again at the next Olympics and if that happens then perhaps Sunderland fans if and when watching them will remember our very own Olympic football champion and the day the GB team played at Roker Park.