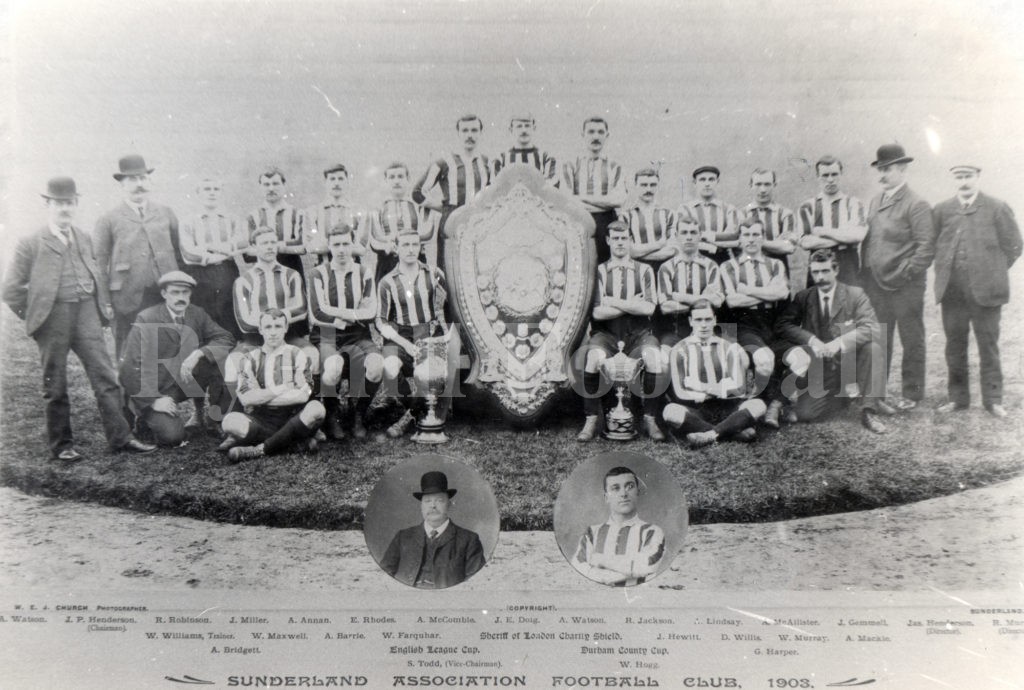 In 1898 a Shield was offered by Sir Thomas Dewar to be competed for by the best professional and amateur football sides of the year and the proceeds were to be devoted to charity. In time it became known as the Charity Shield and then underwent various name changes before we arrived at the present pre season opener between the league champions and the FA Cup winners.

In the early years over £700 was distributed to hospitals and other charitable institutions. In the allocation of the various amounts London charities received the greater portion, but a certain amount was always distributed among the charities of the town which the professional team taking part in the competition represents.

In 1902/03 Sunderland competed for The Sheriff Of London Shield. They played Corinthians and as was the case the previous season, the Tottenham Hotspur ground was the scene chosen for this match. Corinthians were a prominent amateur team of the day but quirkily and due to their high amateur principles in order for them to take part in this competition it was necessary for them to alter their rules as rule 7 stated that “the club shall not compete for any challenge cup or prizes of any description whatever.” The teams selected were:

“Sunderland were honoured by an invitation to play the Corinthians for the Sheriff of London Charity Shield on Tottenham Hotspurs ground. Sunderland were at full strength but the Corinthians were lacking 3 of their most celebrated English amateurs in C.B.Fry, R.E.Foster and Woodward. The weather had turned fine after the morning rain but the attendance was still only about 5,000. The game was won by the professionals and Sunderland had good reason to be well pleased with the result.

Sunderland won the toss and made some dangerous moves at the outset. Bridgett got in a nice centre that Millar fired wide and then Wilkinson was troubled by shots from Robinson and Hogg. The exchanges were interesting and generally in Sunderland’s favour but the interval arrived with no score. The first incident of the 2nd half came when Hewitt dashed through and was checked by Blackburn. Sunderland continued to press and after a pretty run Bridgett centred to Millar who promptly scored the 1st goal about 5 minutes after the restart.

The amateurs could not make much headway against a very sound Sunderland defence. Hogg got away next and crossed to Bridgett who passed to Millar and he notched the 2nd goal with a lovely shot that beat Wilkinson easily in the 65th minute. The Corinthians made a smart attack and forced a couple of fruitless corners with Doig saving smartly from Ryder. Hewitt scored Sunderland 3rd goal. After the match Lord Kinnaird, President of the Football Association presented the Shield to the Sunderland captain after a wonderful display by his team”.

Some notes on the Sheriff of London Shield

Many Sunderland fans over the years have been intrigued about a famous shield won by the club at the beginning of the century. The Sheriff of London Shield stands over 6 feet high and is one of the largest trophies ever competed for in professional football. Here is the story of this massive trophy and why it should have a special place in the hearts of all Sunderland supporters.

The first Shield was played for in the 1897/98 season, March 19 to be exact, and was meant as an annual charity game between the best amateur team of the year and the best professional outfit. A trophy was offered by Sir Thomas Dewar, who formed a committee and drew up appropriate regulations. Initially the competition was a great success, with money raised from the annual fixture distributed to hospitals and other charitable institutions. Whilst in the allocation of the various amounts London charities received the greater portion, a certain amount was always distributed among the charities of the town which the professional team taking part in the competition represents. Sunderland would have benefited in someway from its football team taking part.

The official Corinthians handbook from 1905 gives the following match report:

On February 28 1903 Sunderland, being League champions the previous season played Corinthian Casuals, as they were then known, at White Hart Lane Tottenham. With little or no grass to be seen, and the surface in a greasy condition, accurate passing and kicking became very difficult. Still, these conditions appeared to affect the professionals but little, and they gave a display of collective excellence from start to finish, and won by 3 – 0.

The Corinthian back division played with Vickers, Blackburn, and Braithwaite continually breaking up the combination of the Sunderland forwards, who were very ably led by Miller in the centre. But the amateur forwards were an untried combination; they had not played together before, and they proved totally ineffective as a whole. Occasional individual breaks caused some anxiety to the Sunderland defence, but before the game was many minutes old it was plain that the amateurs were not likely to fall in with one another’s play or show any cohesion in attack.

The professional backs were complete masters of the situation from start to finish and it really reflected great credit upon the Corinthian defence that they only allowed three goals to be scored against them. Lord Kinnaird, President of the Football Association, presented the medals and shield to the winning side.

Around about 1907/08 season there was a rift within the FA relating to the status of amateurs and professionals (a debate which incidentally stopped the home countries from taking part in the World Cup until 1950). The FA split into 2 bodies, the FA and the AFA. This resulted in the FA forming their own Charity competition……The FA Charity Shield, as we know it today, and the amateur version was, after a bright start, condemned to take a back seat.

The Shield was apparently played for during the 1930’s, and in 1939 internal division within Corinthian Casuals split the Club into 2 teams…yes that’s right….the Corinthians and the Casuals.

It seems that for some reason Corinthians retained the Shield and played against Arsenal in 1967. Then it was played for again in 1982 to celebrate the centenary of both Watford and the Corinthians. With both teams in full 19th century gear Corinthians lost 6-1 and Watford decided to keep the Shield (which I’m sure was not part of the plan !!) Anyhow Watford decided this was perhaps a bit unsporting and gave the Shield back to Corinthians.

Round about this time Corinthians got the opportunity to buy their ground and due to the high Capital and running costs something had to be sold to pay the debts. A vote was taken and it was apparently decided to auction the shield, allegedly very much against the FA’s wishes. As the FA feared a mystery American buyer apparently bought the Shield for £26k and took it out of the country. The FA tried to find out where it had gone but the auctioneers have no obligation to tell the FA anything. Quite why the FA were unable to bid for it remains something of a moot point.

The trophy has never seen the light of day since and 6 requests for it to be shown at football exhibitions, have fallen on deaf ears. No reason has been given as to why. For example the FA tried to get it for their Euro ’96 exhibition in Manchester but were refused. 1998 commemorated the centenary of both Roker Park and the Shield.

So what we have here is the forerunner of the FA Charity Shield but unfortunately, despite it being an awesome trophy, it is extremely doubtful whether a wider footballing public will ever get to see it again.