Following the release of Founding Fathers, Volume I; we thought that Sunderland supporters may wish to read about the club’s very first competitive football match. Below is an extract taken from the book for the 1880/81 season. This was the backdrop to the club’s first competitive fixture ever played. Imagine being there? 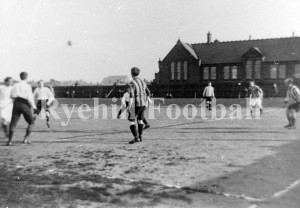 Taken from the private collection of Jeff Brown from BBC Newcastle, the image to the left is thought to be a football match in progress at The Blue House Field in Hendon. It probably dates from around the late 1890’s or very early 1900’s and gives you an impression of what it might have been like too see SAFC play on the ground, which is still there, still looked after by Sunderland City Council. Hendon the traditionally working class and resilient area of Sunderland is of course the original birth place of Sunderland AFC. We have no way of knowing whether the team playing in stripes has any relation to Sunderland AFC, who continued to play random fixtures on the ground long after they had left. It would be great if it was!

On Monday 8 November 1880 it was reported that the draw for the first round of the  first ever Northumberland and Durham Football Association Challenge Cup competition was made. In one of the ties Ferryhill were drawn to play against Darlington Grammar School but for whatever reason the latter declined to play and so Ferryhill were effectively given a bye to the next round. This was of significance to Sunderland AFC.

Without a fixture for Saturday 13 November 1880, Ferryhill hastily arranged a game against Sunderland AFC for that day. This was Sunderland’s very first ‘competitive’ football match and the venue was their home ground at Blue House Field, Hendon.

Sunderland lost the toss and had to face a strong wind. Very soon they ‘scored’ but the “point” was disallowed. Play was of 40 minutes each way and before the first half was over Ferryhill ‘cleverly kicked’ a goal, the only one of the match. The scorer is not recorded. Perhaps it was J McCutcheon, one of Ferryhill’s six man attack, and a man who two seasons later became a Sunderland regular. The teachers tried hard in the second half, but to no avail. The first match against another club had ended in defeat.

Ferryhill, the village side from South Durham were a club which was to fold after only a season or two because of lack of interest. However on that day they proved too good for the Sunderland men. The Monday press report, doubtless written by a Sunderland official seeking an excuse for the 0 v 1 defeat, alleged that Sunderland was “unfortunately represented by a very poor side, no less than five of their best men being absent.”

The club, in that historic match, had captain Bob Singleton in goal, T Taylor and Shirlaw as backs, J Gibbons and W Andersen as the two half backs, and a six man forward line of EG Watson, J Barron, P Dove, F Woodward, Walter Chappell and Jimmy Allan.

Some of the Sunderland players that day were shadowy figures. Shirlaw and Gibbons seem never to have appeared again, for their names do not gain a mention in later reports. Possibly even the names are wrong as no initials appear before Shirlaw’s name and a teacher called Thurlow, not Shirlaw, appears in school records of the period. Others are better– documented. Goalkeeper and Captain Bob Singleton appears in an early photograph as a tall impressive figure with thick bushy sideburns, a moustache and a receding hairline. A master at Gray School at the time he later became superintendent of a local charity, a councillor, a member of the School Board and of the Board of Guardians. He turned out for Sunderland for two seasons, sometimes in goal but more often as a full back and later served on the club committee. He met a tragic death at his Peel Street home in March 1895. During a drinking bout he fell and struck his head against the bed. A coroner’s inquest decided that alcoholic poisoning had killed Sunderland’s first captain. A police band, a posse of constables and the Mayor were at his funeral at Ryhope Road cemetery. He was only 27.

Walter Chappell and Frank Woodward were two more who were to die in their prime. Both were colleagues of Jimmy Allan at Hendon Boys School. Indeed the staff list of that school includes five Sunderland players; ChappelI, Woodward, Allan and also John Grayston as well as a pupil teacher Charles Funnell, so it was a real source of talent in those early days.

Frank Woodward, another pupil teacher, was just two months-past his fifteenth birthday when he turned out against Ferryhill. We know little about his footballing talents but he was a teacher of considerable ability and an affable and courteous man. He trained for the teaching profession at Durham and took a degree at London University. When he died, aged only 32, on 4th September 1897, he was in charge of the instruction of pupil teachers under the Sunderland School Board and those pupils thought highly of him for they subscribed over £40 towards the cost of an 11 foot high dark red Aberdeen granite monument still to be seen in Bishopwearmouth  Cemetery in Sunderland.