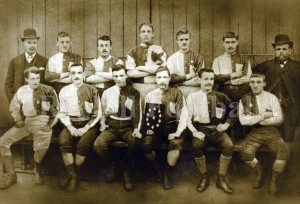 One of the most difficult things about researching the history of Sunderland AFC is the lack of information on the early players. Thanks to the online British Newspaper Archive some of the pioneering players have been brought to life through long time unknown and unread newspaper articles of the day. As a foretaste of what is to come in Founding Fathers Volume II we thought that you might like to read about George Monaghan who played for The Black Cats from 1885 to 1888 and featured in 4 competitive games for the club (and a multitude of non competitive games), remember we didnt enter the league until 1890 but had of course competed in the “English” Cup (now FA Cup).

The following write up on Monaghan appeared as part of a 3 part write up in the first ever recorded history of Sunderland AFC in the Sunderland Echo on Wednesday 21 December 1887;

Monaghan, who now holds the position so many years occupied by Allan as extreme “left,” is perhaps one of the strongest players in the team. Hard as nails, he can stand a deal of knocking about, rough play having little effect on him. He is 25 years old, stands 5ft. 7in., and so compactly built is he that he turns the scale at 11st. 11lbs. A native of Ayr, he cannot be termed as light as the name of his birthplace.

His football experience commenced in 1883, when he joined a junior club called “The Seaside.” His membership of that club, however, was of short duration, for, being asked to join the senior club of his native town, he did so, and the following season was the first reserve for the first team, and having a place in the second team in the Scottish Second Eleven Cup Ties until it was defeated by the ultimate winners – Kilmarnock Athletic – in the third round, after a drawn game. The whole of the following season he had a place in the first team, assisting in the winning of both Kilmarnock and Ayr Charity cups, also taking part in the Scottish cup ties up to the fourth round, when they were defeated by the Edinburgh Hibernians, the present holders. In the season 1885-6, he only played a few matches in his old place, for after taking part in the first of the three Scottish cup ties against 3rd L. R. V., he was, unfortunately, owing to illness, unable to fill his post during the remainder of the season.

Last season, after playing only one game for the club of his native place, he secured work at Dumfries and joined the Queen of the South Wanderers, playing for that club the remainder of the season, making his debut in a five-a-side contest at the Dumfries annual games, the team winning the first prize of five silver cups. He also took part, together with Halliday and three others, in a five-a-side competition at Dumfries Recreation Grounds, again winning first prize (gilt timepieces), beating Richardson’s team by one goal. During his connection with the “Wanderers” he played with them for the Churchill Cup. Mention of this cup has several times cropped up in these sketches; it may, therefore, be as well to state that it is a trophy presented by a gentleman of that name for competition amongst clubs in the southern counties of Scotland. Monaghan also took part in the winning of the Southern Counties Charity Cup, the “Churchill” just eluding their grasp, Lockerbie beating them in the final by 3 to 2. Besides this, the team reached the fifth stage in the Scottish Cup Competition, but was then “put out” by the “Hibs,” the ultimate winners, and, as I have already stated, present holders.

Further than this, he was selected as one of the representatives of the Southern Counties in the fixture against Ayrshire, but refused to play, owing to an umpire, in the trial game, having made an unfounded charge against him, which he declined to withdraw. At the commencement of the present season he was representing the club of his adoption when they inflicted a seven to two defeat upon Edinburgh Hibernians, and with a weak team scored 4 goals against 3 for their old rivals – 5th K. R. V. He then came to Sunderland, having secured work at the New Town Hall buildings, and being an old club-mate of J. Hunter’s, who played for Sunderland two years ago, he joined the senior club, proving a tower of strength on the left wing. It is hardly necessary to dwell on his performances here, seeing they are fresh in the memory of most of my readers. He is speedy, a good shot, full of “dodges,” and, above all, cool-headed.

Unfortunately he is not well at present, but hopes when the next Cup Tie is decided to be in first-class fettle. He was selected first reserve for Durham County v. Staffordshire, and but for the English Cup Tie would have had to render assistance. A place on the county team v. Cleveland was also offered to him, but again he could not fill it, illness being the cause on that occasion. However, another chance of county honours awaits him on December 31st, his name being found in the list of players selected to do duty against the Corinthians.

There are write ups of a number of players of the day with parts 2 and 3 of the series being entirely taken up with them. All will be published in Volume II of Founding Fathers.