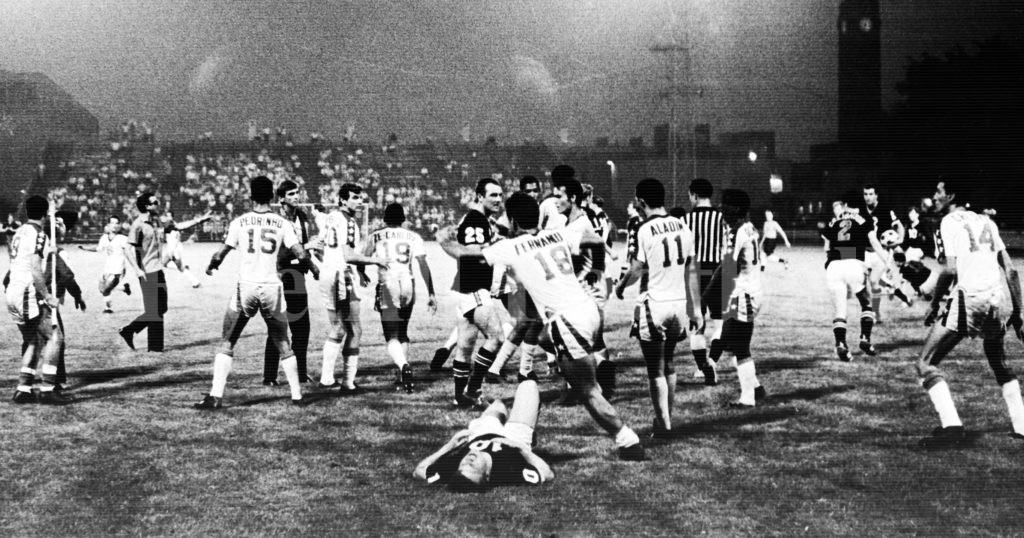 Following the 1966 FIFA World Cup held England and broadcast in the United States, promoters came together to start up two professional soccer leagues in U.S – the United Soccer Association (sanctioned by FIFA and the United States Soccer Federation) and the National Professional Soccer League (not sanctioned).

The reason for the formation was clear; the World Cup had been won, for the first time, by an English speaking nation and television audiences for the competition had been high in the USA. The game was further promoted in the USA by the documentary film ”Goal!” which was the official FIFA film of the 1966 tournament. Never short of entrepreneurs, various business men, particularly stadium owners, saw the potential for a re-birth of the sport in their country. With encouragement and sanctioning from the U. S. Soccer Federation and FIFA, the North American Soccer League (NASL) in 1967 announced plans to begin operating in 1968.

Suddenly confronted by a competitor, the National Professional Soccer League (NPSL), the NASL changed its name to the United Soccer Association (USA) to avoid confusion with the other league and decided to play its first season in 1967.  Due to a lack of time in recruiting their own players to teams the United Soccer Association imported full teams from other nations, placing them in U.S. and Canadian cities, thus forming outfits for a summer league (summer season represented the off season for European and South American leagues).

In Europe the tournament was allegedly brokered by the TV commentator Kenneth Wolstenholme, former England forward Jimmy Greaves, ex-Nottingham Forest forward Roy Dwight (an uncle of Elton John) and London businessman Jim Graham.  The National Professional Soccer League had a national television contract in the U.S. with the CBS television network, but ultimately the ratings for matches were unacceptable even by weekend daytime standards and the arrangement was terminated.

Among the rival NPSL’s backers were Art Rooney, owner of the NFL’s Pittsburgh Steelers, and Jerry Hoffberger, owner of baseball’s Baltimore Orioles. It had 10 teams: the Atlanta Chiefs, Baltimore Bays, California Clippers, Chicago Spurs, Los Angles Toros, New York Generals, Philadelphia Spartans, Pittsburgh Phantoms, St. Louis Stars, and Toronto Falcons. Because the NPSL was not sanctioned by soccer’s national and international governing bodies, as the USA was, its teams had problems finding players, since they faced possible suspension for playing in the league.

Sunderland AFC as part of the USA became the Vancouver Royal Canadians; Brazil’s Bangu Atlético Clube, amongst others, became the Houston Stars. Together they joined a further 10 original teams in the United Soccer Association.

The 12-game season began in late May of 1967 and ran through to the mid July, with Los Angeles defeating the Washington Whips 6-5 in extra time in the first Championship game. In April, 1967, the 10-team National Professional Soccer League also kicked off with a 32-game schedule. The Oakland Clippers defeated the Baltimore Rays in a two-game championship series.

In December of 1967, the two leagues (United Soccer Association and National Professional Soccer League) merged and 17 of the 22 teams remained to form the North American Soccer League (NASL) – which remained the top U.S. soccer league until 1984. The NASL would, of course, become synonymous with star footballers such as George Best, Franz Beckenbauer and the incomparable, legendary, Pele.