In the very early 1920s, the London based Godfrey Phillips tobacco company produced a series of now highly collectible “Pinnace” football cards to stiffen up the packets of their cigarettes.

In the 21st century these cards are iconic and feature some of the all time pre war greats of British football.

In the first print run there were initially 400 cards, but this rose to over 2,462 by 1924 and if you were to count all the different varieties of cards, both error and team changes, there amounts to well over 3000! Considering that there were also five different backs then you set yourself a most formidable task if you were to try to collect them all.

Added to this were different sized cards right up to postcard sized cabinet cards. However the most prized are the very rare team photographs that can fetch anything up to £1,000.

You could obtain the bigger sized cards by sending off to Godfrey Phillips various amounts of the smaller cards.

All the major and minor football teams of the day were represented, including of course Sunderland AFC. Rugby teams also featured.

The Sunderland Pinnace collection amounts to 21 cards, one of the largest sets, plus the team photo (only 1 exists that we know of to this day). There are also another 15 or so players who featured for other clubs who had or would go on to play for Sunderland. Icons such as Charlie Buchan featured for Sunderland, together with other legendary players such as Joe Kasher and Harry Martin.

In 2015 a Sunderland historian, enlisted the help and worked with noted historians from other British football clubs, and set out on the long trek to not only find out about all 2,462 players but to produce in print on demand publications team books for every football club featured in the collection. Progress to date can be judged by clicking the image of Charlie Buchan below and following the link that gives an up to date position on progress: 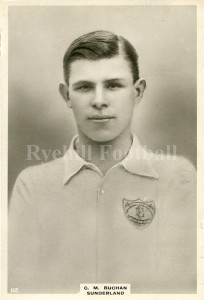 Its a long journey but along the way some surprising stories are emerging.