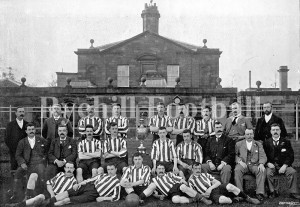 Having been elected to the Football League in 1890/91, Sunderland set about dominating the English game. With the world of soccer in its infancy it is the British game that is the heartbeat of association football.

By 1895 Sunderland has been English Football League champions three times and The Black Cats are ready to take on the might of Scotland’s Heart of Midlothian for the world football crown. What happens at Tynecastle is something to marvel at.

The decade ends with the club home at the iconic Roker Park.

Meet Doig, Wilson and Campbell and a galaxy of stars who take on all comers as Sunderland AFC are established as the pride of English football.

Champions of the World, Sunderland AFC 1890/91 to 1899/1900 is the second decade in the mammoth history of Sunderland AFC. It thrills and delights as the red and whites establish the club as one to be reckoned with.