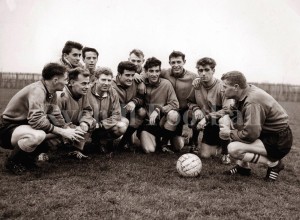 The 1960’s would be the decade when the home of football would eventually rule the world.

The first global tournament was held in Chile 1962, and despite a quarter final place for England it was Brazil who would eventually triumph to retain their Crown won in Sweden 4 years earlier. Pele would peak in 1970, but all the talk was of 1966.

England, under Alf Ramsey, won a memorable final against West Germany, and the manager’s “wingless wonders” won the Motherland’s only international trophy of note. Two years later and a semi final place in the European Nations Cup, as was, signalled England’s highest placing ever in the competition, until 1996 of course.

The “Iron Curtain” countries would dominate the Olympics with the Hungarians taking consecutive tournaments in Rome and Tokyo.

Club wise there were some turbulent matches in the world club championship, with Manchester United and Glasgow Celtic being the victims of some rough tactics by Estudiantes and Racing Club. The Argentines notorious fragile temperament seeing them onto victory. Argentinean and Uruguayan sides dominated the Copa Libertadores, South America’s equivalent of the European Cup.

In Europe’s premier club competition, Benfica and Internazionale dominated the early 1960’s, but by the end of the decade Glasgow Celtic and Manchester United had been crowned “Kings”. The latter, some reward for the tragedy of Munich. British success was also registered in the Cup Winners Cup and Fairs Cup competitions.

After years of European club domination, the great Real Madrid would have less success. Puskas and Di Stefano would leave with grace.

The decade belonged to Pele, the finest footballer of this or any other decade. That he led a previously unknown Santos to world glory, and eventually Brazil to similar honours internationally marked him out as a true genius.

Socially it was the swinging ’60’s, with the Beatles and Liverpool in full swing. Carnaby Street was the place to be seen in London and everyone wanted to go to Chelsea!

For Sunderland, there were peaks and troughs. Promotions, relegations, memorable games, and some forgettable ones. It was the decade of Hurley, Clough, Sharkey and Fogarty, to name but a few. 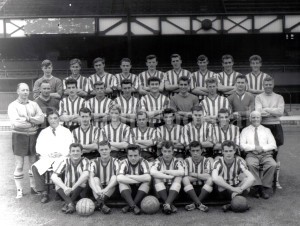 Sunderland had one of their best seasons in recent years, ending up 6th.

This improved campaign started too see the emergence of players such as Cecil Irwin, Len Ashurst and Martin Harvey. Charlie Hurley, after a rocky start to his Sunderland career, was now beginning to blossom.

Harry Hooper was signed in the September from Birmingham City and would go on to make 80 league and cup appearances, scoring 19 goals. He was the first player to sign for the club who had appeared in a European Club final, having played for the Brummies in the Inter Cities Fairs Cup Final in 1960, against Barcelona.

The first game of the season kicked off at home to Swansea Town. The 2 vs. 1 victory gave Sunderland false hope, and by the end of October we had won only 2 of the opening 15 games. Then things began to change. The next 12 games witnessed 8 victories, including a 7 vs. 1 thrashing of Luton Town. The last 15 games witnessed 5 defeats, and eventually put paid to any hopes of promotion.

The 1960/61 season saw a new competition, the Football League Cup, and for Sunderland it was an inauspicious start. Having led Brentford 3 vs. 1, we eventually lost 3 vs. 4 at Griffin Park – out at the very first hurdle. The FA Cup however produced some memorable moments. A home tie against The Arsenal at Roker Park saw over 58,000 turn up for a scintillating 2 vs. 1 victory. Our reward was an away tie at Anfield. At the time Liverpool were not the team that took on, and conquered, all comers, and in front of 46,485, Sunderland triumphed 2 vs. 0. Hooper and Lawther doing the damage.

On to Carrow Road and a crowd of 42,000 – many travelled from Wearside saw Sunderland triumph 1 vs. 0, a Charlie Hurley goal settling a tense affair. The 6th round would be against high flying Spurs, going for the double. The game at Roker Park was remembered not so much for the 1 vs. 1 scoreline, but for the thunderous Roker Roar, afterwards described by Danny Blanchflower, the Tottenham captain, as the most awesome sound he ever heard in football. With over 61,000 in the ground it was frightening. The replay at White Hart Lane drew 64,797 and saw Sunderland mauled 0 vs. 5 by Tottenham who would go on to win the double, the first English club in the 20th century to do so.

Whilst the FA Cup campaign had been memorable, it had also been horrendous with Sunderland supporters killed on the way back from Anfield. John Reed, a Sunderland director had attended the funeral on behalf of the football club, although he himself passed away shortly afterwards.

Pictures from the private collection of Sunderland supporter Brian Leng.