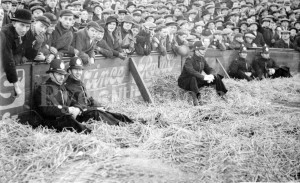 The 1920’s Roker Roar watched over by the local Sunderland Police, who seem happy enough sitting on bails of straw.

In the build up to the 1996/97 Premiership Season, Paul Wilson of the Observer made the following statement in his Sportsview Section:

“Amid all the hype and hysteria, it might have gone unnoticed that Sunderland are up too, but this will be put to right once Roker’s red-and-white hordes begin their travels through the Premiership. Contrary to popular myth, the Geordies of Newcastle are not the most fanatically exuberant followers in British football; that honour belongs to their Sunderland rivals, the Mackems. Whether disdaining the option of sitting down for the entire duration of matches, standing bare-chested throughout the coldest January afternoon (I’m talking male fans here – Wearsiders are not that exuberant), or collectively ignoring the evidence of their eyes and acclaiming their team as the greatest the world has ever seen, Sunderland followers are in a class of their own.”

I was pointed in the direction of this article by a member of the Black Cat Mailbase on the morning of 21 August 1996 as I made preparations to travel to The City Ground, home of Nottingham Forest, to attend Sunderland AFC’s first away game of that campaign, our last season at Roker Park. It stirred something, I thought about what it was to be a supporter of Sunderland AFC and set about capturing it in words. This is what, after over 100 revisions and two years, I arrived at and it was subsequently produced in The Official History of Sunderland AFC, published in 1999. The version that the editors of the book received is as follows:

Whilst Sunderland had many venues before settling at Roker Park in 1898, the ground was made famous, and became synonymous with vocal support due to the passion with which the fans, traditionally miners and those from County Durham, displayed. In time the supporters of Sunderland AFC became generically known as The Roker Roar.

The hardship endured by the supporters in the shipyards and collieries during the working week meant that the release of Roker Park, turned backing the Club into a partisanship that has often led to violent incident, as ground closures in the early part of the century testify. Like any passion it can sometimes generate white hot vitriol.

The North East is a hard area, one where traditionally it often boiled down to survival of the fittest. The supporters of Sunderland AFC do not suffer fools gladly, and to paraphrase Frank Sinatra (RIP), “if you can make it here, you can make it anywhere”.

To many, perhaps the overwhelming majority, supporting of the red and whites is of almost religious significance, and the oft heard saying “keep the faith” is nothing blasé or crass. Unlike Glasgow however, the sectarian divide never played a part. The religion derives not from a “community” (certainly not like Scotland’s second city) but an “intangible thing”. A memory, a story, an instinctive family birthright, an emotion. Although of different origin from Rangers or Celtic, it leads to the same intense devotion. It has been said that Sunderland are the Bhoys or Gers of English football. Praise indeed to be compared with such football fanatics.

Perhaps it is no co-incidence that the Roker Roar supports with such emotion a Club founded by a Teacher newly arrived from Glasgow University. 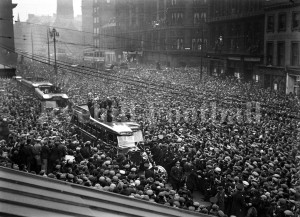 The Roker Hordes greet their cup winning heroes back home on Wearside having won the FA Cup for the first time.

Whilst supporting a football team is a personal thing, to be a member of the Roker Roar, is a selfless act. It is a contradiction which can’t be explained. If you aren’t a member willing to help your fellow Sunderland fan, then you betray the forefathers who went before you. Many acts within supporters’ branches throughout the world have amply demonstrated a willingness to put group benefit before individual profit. No pain, no gain, as they say.

If something is of importance to you then the downs are cherished almost as much as the ups. In search for the Holy Grail, it is the historical significance of the club, and the past glories it has witnessed that drives many of the fans forever onwards, with tales from their Grandfathers and fathers, whetting the footballing appetite.

The Roker Roar is demanding, but in truth would the club have it any other way? At the end of the day it is evident that if something is so worthwhile to so many people then the hard times will be endured, so that the good times, when they come can be enjoyed, so very, very much.

Every Club thinks that their fans are special, and rightly so, but some, including the famed Roker Roar can quite literally change the course of a game. The atmosphere generated by them, can, at times, be so intimidating that opposing teams and supporters alike have quite simply capitulated. It shouldn’t be regarded as a weakness on the part of our foe, just inevitability. Many have gone before you.

To place the Sunderland support into perspective you could arguably say this. Throughout the footballing world there is perhaps only South America, Argentina specifically, and Glasgow, which can rival both Tyneside and Wearside for passion. That statement is probably not too far from the truth. It tells you how special these people really are. It is a love bordering on a “fatal attraction”.

Danny Blanchflower once said that having travelled the world the Roker Roar was the most awesome display of support he had ever seen. The majestic and brilliant Irishman knew what he was talking about.

The Roker Roar is the “secret” of Sunderland AFC, and why one day we will rediscover what past generations have raved about. Wearside is no place for the faint hearted. Shrinking violets need not apply to join our massed ranks.

When success happens you can be sure that the Roker Roar will have been with the Club every step of the way, and whatever success is achieved, can only be dedicated to the loyal men and women, some of whom have quite literally given their life, in service to what they consider to be an Institution.

However, as we have already stated, the story of the Roker Roar is not of individuals, although many noted fans became legend. It is the story of a travelling band of “footballing nomads” bound together by a cause that only they can understand.

Sunderland AFC realise what they have, and know that frustrating as they can sometimes be, without them, we might as well all pack up and go home. 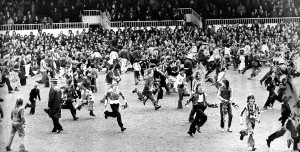 Statistics can’t tell the story of the Roker Roar but finally think on this:

·         In both 1991 and 1997 Sunderland took over 15,000 supporters to Manchester City and Wimbledon on the final day of the season to witness their team relegated. The game at Maine Road saw a higher crowd than that of the Manchester derby. Whilst there were expected tears from the rank and file from Wearside, many City fans openly wept with them, the sign of a devotion recognised by fellow “loyals”.

·         By 1998 Sunderland had won 1 domestic trophy in 60 years. They had suffered third division football, 3 trips to Wembley in which they failed to score a solitary goal, and had not been in the top half of the top flight for 40 years. The Club had been relegated 7 times in that period. A whole generation had grown up on a diet of, at best, mediocrity. In terms of what should be parallel clubs e.g. Arsenal, Aston Villa and Liverpool the transfer outlay was insignificant, a lack of “stars” evident.

Playing Reading on a Tuesday night in February 1998 they attracted 40,579 to what was a Nationwide “second division game”. Can someone please tell me what other Club in British, perhaps world football, could emulate that feat, having endured so much?

The words “I’m thinking hard” and “none” spring to mind.

Someday and somewhere God will smile down on us, and the party will begin. The Peoples Game, Pele’s Beautiful Game, will smile and say “it’s only the Mackems, taking their deserved bow” and everyone will join in the festivities.

To those loyal and magnificent fans past, present and yet to be; the foot soldiers of Sunderland AFC, I can only say: keep the faith; your reward will be with you soon. 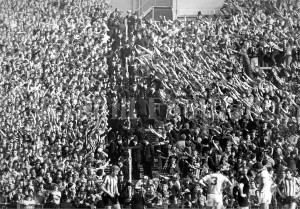 The ultimate – The Roker Roar in full cry, right, as they taunt the massed ranks of their bitter rivals Newcastle United – Roker Park 1980

Postscript to the Nottingham Forest game:

At the time this article was written, specifically the Nottingham Forest game referred to earlier I was the freelance editor of the then SAFC official website www.sunderland-afc.com, a position I held for 7 years until 2002. Just prior to leaving the house to catch the coach for The City Ground I checked my club e-mails. My inbox contained an e-mail that almost typified the article I subsequently wrote. It was from an exiled Sunderland AFC fan who had contacted me via a satellite system in the Gobi Desert asking me to send him details of the Sunderland performance as soon as I returned home. I did just that at approximately 1am GMT.

I can’t remember his name; I do not have a clue why he was in the Gobi Desert. Why he had a satellite system you tell me.

Sunderland won the match 4 v 1 with Niall Quinn scoring two, Michael Gray one and Richard Ord one goal each. It was Sunderland AFC’s first win at The City Ground since March 1968.

To this day I have visions of a Sunderland AFC supporter receiving this news in the middle of the Gobi Desert and letting out a shriek of delight, disturbing the peace of the night and then settling down to sweet dreams. I have no idea what the time difference is, but if it wasn’t the middle of the night, don’t spoil it for me please! I’ve lived with this vision for 18 years now.