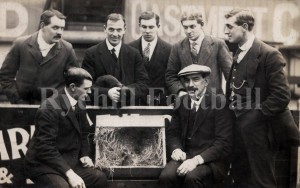 Left; Sunderland players Harry Low, George Holley, Billy Cringan, George Anderson, Harry Ness and captain charlie Thomson tend to the Sunderland AFC Black Cat, together with an unknown person far left. The Cat lived in the box you can see filled with straw and roamed freely inside Roker Park catching rodents. The picture dates from around 1912.

A perennial question for Sunderland fans has been the origin of the clubs nickname, The Blackcats. In 2000 the club conducted a poll on what should be the clubs official nickname. It was a vote that came as something of a surprise to seasoned observers and historians of the club as quite frankly there should never have been the need for such a vote.

The club was always known as The Blackcats for as long as anyone could remember. Quite where unofficial nicknames such as The Rokerites came from was anyone’s guess.

What was strange about this vote was that when the results were confirmed, The Blackcats won, predictably and fittingly by a landslide, the club then proceeded to tell us why this was the nickname and to be honest their story surprised everyone. It wasnt that The Black Cat Gun Battery wasnt factually correct, it was simply that no one had ever heard of this being the origins of the club’s nickname.

In September 2005 Sunderland Historian Dave Hillam gave his version of events in a cracking piece that is both interesting and illuminating. In essence there are 2 questions to answer: 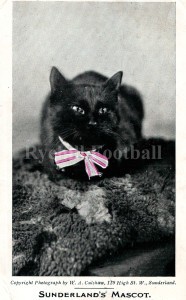 The picture of the original Blackcat left was taken by Culshaw of Sunderland. Culshaw was responsbile for taking other photogrpahs of Sunderland AFC related topics ie team and player shots around from the turn of the 20th century to the 1913 period.

Dave Hillam’s version of events in 1909 seem to answer the above 2 questions posed but bear close scrutiny especially in conjunction with the following 2 pictures: 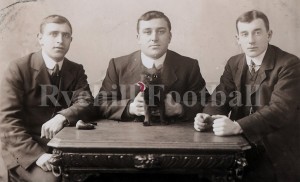 The picture left is of Billy Hogg and 2 unnamed team mates (?) sitting at a table with a Blackcat being lovingly handled by them. It is the first known picture of a Blackcat being associated with Sunderland AFC. Hogg signed for Sunderland in 1899 making his debut against Notts County in December of that year. His last game for Sunderland AFC was on 17 April 1909, a 4 v 2 away win at Bristol City. We can therefore logically conclude that The Blackcat was officially adopted by Sunderland AFC’s players in between that period, although Hogg did go onto be associated with Sunderland in a coaching capacity well into the 1920’s and beyond. 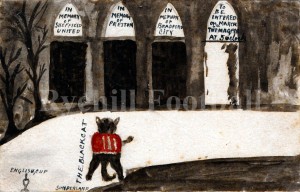 The image left is believed to have been drawn by a young Sunderland fan in 1909. We can date it to 1909 as the inscriptions above each of the doors relate to RIP’s associated with the clubs that Sunderland AFC defeated in their 1908/09 FA Cup run. Therefore we can definately prove that by 1909 The Blackcats had been formally adopted by the football club.

An as historian of the club it is my opinion that whilst The Black Cat gun Battery story is a lovely historic backdrop, it is no more than that. It would appear that irrespective of what Sunderland AFC might say the nickname of The Blackcats was never adopted due to any relevance with a Gun Battery. We know its factually true ie the Gun Battery existed, but why did they use this story to justify the nickname? No one knows. The football club has never said.

As Dave Hillam intimates it had nothing to do with a gun battery. The gun battery had never been mentioned by the football club or any of its supporters until 2000. Quite simply the cat had brought the players good luck. It was mere co-incidence that a Gun Battery called The Black Cat had existed; a convenient co-incidence but a co-incidence nonetheless.

If Billy Hogg was still alive today – perhaps he could have told us the exact date it was adopted. For now we’ll have to keep on searching the newspapers for the true date and the true reason. However it is becoming increasingly apparent that a Gun Battery had nothing to do with it.

Finally of course we have 12 year old Billy Morris to thank for helping us win the 1937 FA Cup at Wembley. He smuggled a Black Cat into the stadium via the inside of his jacket. 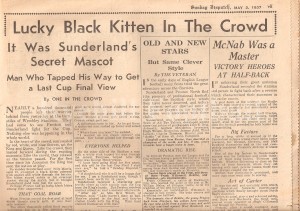