Although Ryehill Football concentrates its efforts on chronicling the fortunes and history of Sunderland AFC we also, as our title implies, look at Vintage Football. With this in mind we are featuring here a Manchester United player from the 1920’s, Jack Grimwood, who was also a local North East lad, born in South Shields. Who knows; if his family are still around today they may well be able to confirm that he was a Sunderland supporter! 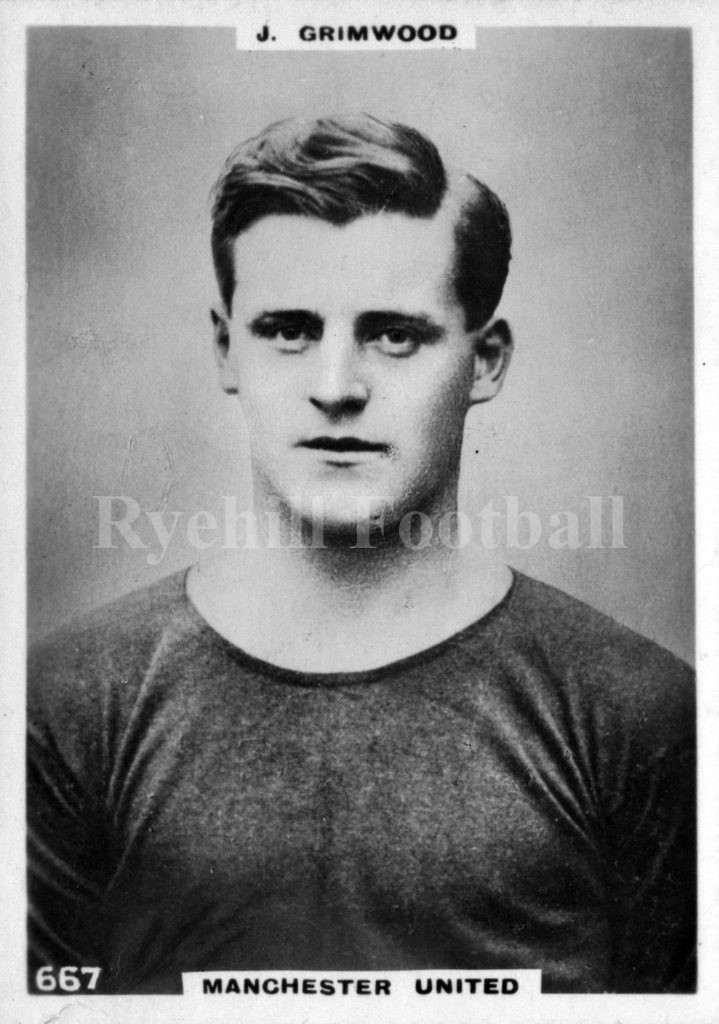 Born into a coal mining community, Jack Grimwood started his career with South Shields FC in the Northern Victory League before the 20 year-old was spotted by United manager Jack Robson in April 1919.  Grimwood made his United debut in the war-time Lancashire Cup clash against Stoke City a few weeks later but had to wait to normal league services resumed to make his official debut in the Manchester derby in October 1919.

A strong versatile player who was good in the air and clean in the tackle, Grimshaw was comfortable all across the half back line but was at the club during a time when United also had the services of Clarence Hilditch, Frank Mann and the more popular Frank Barson. Thus he was regularly fighting for his place in the team.  Regardless, he still managed to total over 200 league and cup matches during his eight years at Old Trafford, a respectable total given a couple of significant injuries and also the form of Hiditch and Barson.

He possessed the important ability of keeping the ball on the ground and retaining possession and was given a benefit match in April 1925 after the Reds won promotion. However, after struggling to get into the team he was surprisingly sold to Aldershot Town in in June 1927. Given that Barson left the following year, it was perceived by supporters as another baffling decision by the club directors.

Grimwood stayed at Aldershot only a matter of weeks before moving on to Blackpool. Unable to get into the Tangerines first eleven, a year later he was plying his trade in non-league circles with Altrincham and later the works team of Taylor Brothers in the Manchester League.