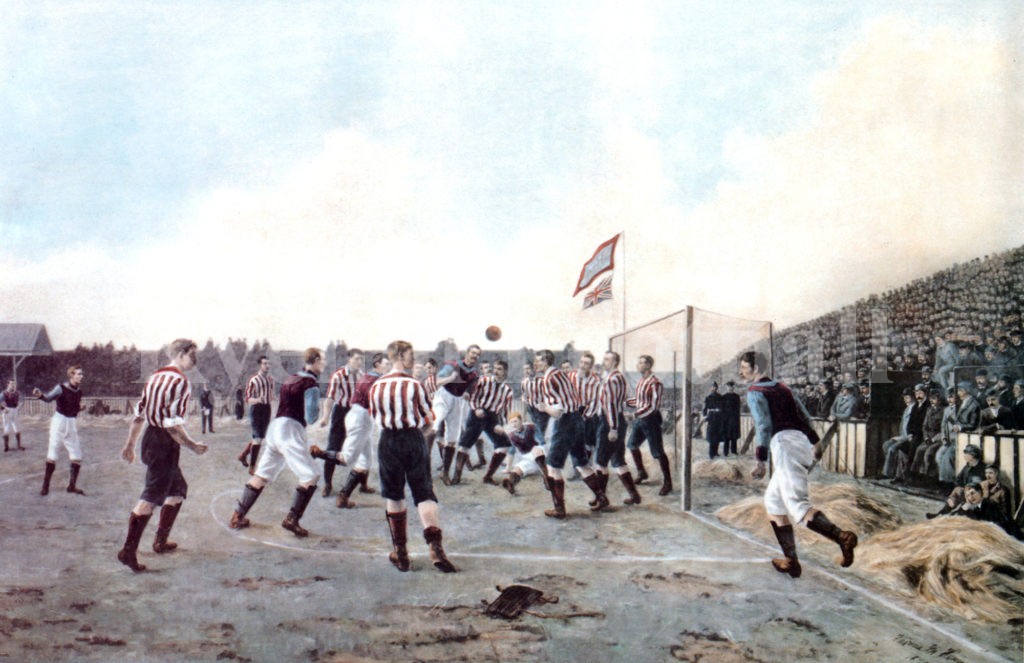 Anyone walking into the main foyer of the Stadium of Light can’t help notice the stunning painting, behind its protective glass casing, of the fixture between Sunderland and Aston Villa played at our then home ground of Newcastle Road.

That this English first division match, played on 2 January 1895 ended 4 v 4 was run of the mill, that the painting is recognised as the oldest of an Association Football match anywhere in the world marks it out as something special.

The “Hemy Painting” as it is commonly referred to is in due deference to the artist Thomas Maria Madawaska Hemy.

In celebration of Sunderland AFC’s third English league championship in 1894/95 the football club commissioned Hemy, a local North East artist, to paint a picture of the team in action and the game against Villa was the match chosen. The painting has over the years had two titles; “A Corner Kick” and “The Last Minute – Now or Never”.

This is the story of the match, the artist and the further history of this priceless footballing artefact. 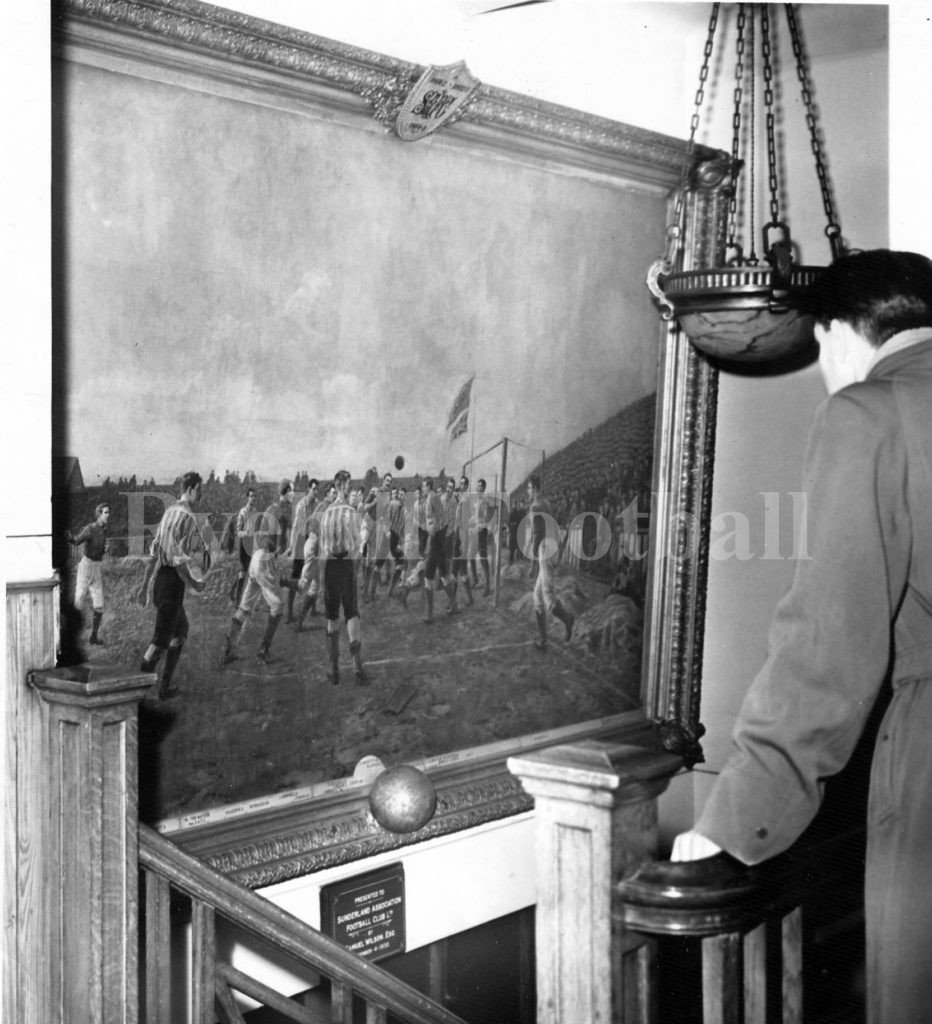 Both Sunderland and Villa at that time were huge clubs. A draw wherever they played and this meeting of the two sides was eagerly anticipated. Villa were the current league champions and although they had started their league campaign badly, including losing to Sunderland in the September, they had gradually climbed the table to lie just behind Sunderland who were top. With this in mind Villa were confident of winning and at odds of 6 to 4 appeared a good bet.

The match took place on a Wednesday and Villa arrived on the Tuesday. They looked in the peak of condition. The weather was fine and much warmer than Tuesday although a strong North East wind was blowing. Meehan returned at right back for Sunderland and Johnstone moved to left half with Auld dropping out. The pitch was in pretty fair condition with a sprinkling of snow on it and the crowd of around 12,000 was bigger than that of the New Years Day match. Sunderland won the toss, took advantage of the wind and Devey kicked off for Villa.The game itself was a thriller, 4 v 4, with Villa taking the lead after quarter of an hour. Nip and tuck all the way it was generally agreed that a share of the spoils was a fair result.

It has been mooted that there is something odd about the painting of the footballers hands and that Hemy had been used to painting pugilists. There is no evidence that this was the case and there are no art works of Hemy’s showing pugilists. 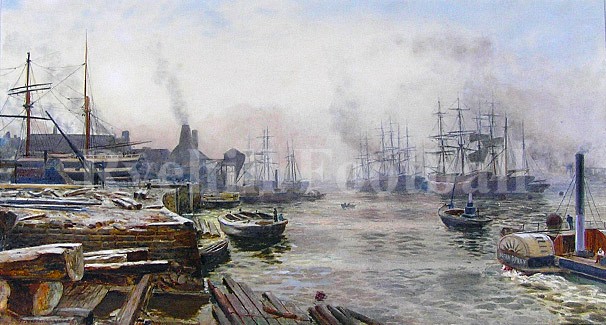 Winter On The Tyne by Thomas Hemy

It was subsequently reported in the June 1898 edition of the Sporting Mirror that: “The annual meeting of the Sunderland Football Club has been fixed for the 29th of this month. The officials have purchased the painting by Tom Henry (sic), representing the cup tie (sic) between Aston Villa and Sunderland in 1894 (sic) and also the artist’s supplementary proofs. Both the painting and the proofs they propose to put up as a prize drawing for the benefit of the funds of the club”.

On 11 July 1900 and Sunderland AFC’s annual meeting took place at the Grand Hotel, Bridge Street. The clubs chairman JP Henderson presided over an excellent turnout. The annual report showed an excess of expenditure over revenue of some £247.

At the close of the meeting a discussion took place regarding the Hemy painting of the famous match against Aston Villa. It was explained that the painting had been raffled but as no-one had yet established a claim it was being stored in a Sunderland furniture dealers establishment. The chairman thought that he might hand the painting to the Borough Art Gallery or perhaps the Town Hall. No decision was taken.

So what happened to the painting?

Intriguingly and only recently a postcard was located on e-bay of all places showing the painting hanging on the wall of a Sunderland pub called The Bells which was located at 14 Bridge Street, just up from The Wearmouth Bridge. It operated under the ownership of Jas. Henderson and Sons; the father of the club chairman. The Bells had an upstairs restaurant and in that upstairs restaurant the Hemy work was displayed for a period. It dominated the grill room. 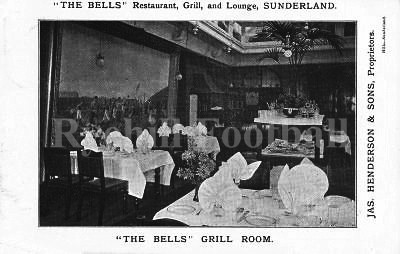 So we know that from the furniture dealers it found its way to the Chairman’s Father’s pub.

The story can be further pieced together in that a picture emerged of the painting hanging on the wall above the reception area at Roker Park. Underneath was a plaque indicating that the Hemy Painting had been “Presented to Sunderland AFC by Samuel Wilson Esq., September 4 1930 (see above).”

Who was Samuel Wilson and how did he end up with it? Wilson was on the SAFC Board of Directors in the 1920’s and he was a local businessman. Quite how he came to get his hands on the painting is a moot point. Nevertheless here the painting was, back at Roker Park.

Then on Monday 15th September 1997, Sunderland revealed that the famous painting by Thomas M.M. Hemy which has been on loan to Sunderland Museum and Art Gallery since 1990 was returning home to the Sunderland Stadium of Light. We do know that the painting had been in a state of disrepair and the Sunderland AFC Supporters Association raised an alleged £8,000 to have the painting repaired.

Latterly a rumour emerged that the supplementary proofs referred to in the minutes of the 1900 Annual Meeting turned up at the SAFC Supporters Association. It was alleged that they were then bought to the attention of and bought by one of the Directors of Sunderland AFC. I know who the Director is but I’ll not reveal his name. 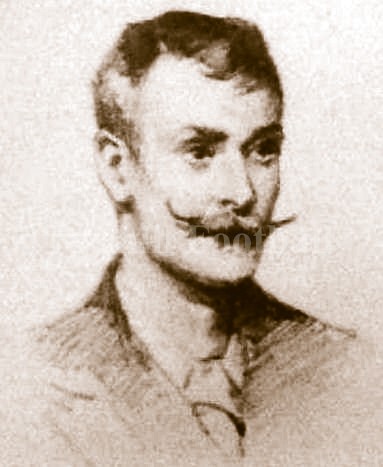 Thomas Marie Madawaska Hemy was born in and around February 1852 off the Murtar Var Rocks near the Brazilian coast.

The “Marie” was in due deference to the Catholic Church of which his father was a devout member and the “Madawaska” in homage to the ship that Thomas was born on. The ship Madawaska was registered in Canada and named after a river in Ontario. His sea birth was due to the family emigrating (temporarily) to Australia, leaving Liverpool in late 1851/early1852 bound for Sydney Harbour.

The family’s roots were in Newcastle, where his brothers had been born, and having found life tough in Melbourne, where they had settled, the family returned to the North East in 1854.

At aged 14 Thomas Hemy ran away to Sea for four years sailing exotic seas such as The Dardanelles aboard such ships as The Brindisi, a passage of his life that he recounted in his autobiography Deep Sea Days.

That is perhaps then no co-incidence given all of this that Hemy’s brother (Thomas had 9 brothers and 3 sisters) Charles Napier Hemy would become one of the finest British maritime painters to have lived, a talent that was to be passed on to Thomas. All the family had a love of the sea and the Arts; Hemy’s Father Henri was an accomplished musician.

Back in England a substantial amount of Thomas’s time was spent at the mouth of the Tyne River painting boats or inspiring paintings of shipwrecks. Perhaps his most famous work being “The Wreck of the Birkenhead”; another “Winter on the Tyne” is shown above.  However he also gave us masterpieces such as “The Eton Wall Game”, “Goal!”  painted in 1882 and of course “The Last Minute – Now Or Never”.

However it would be wrong to think of Hemy as a parochial North East painter. We have read about his sea faring exploits which gave him a very broad horizon and he also exhibited at such places as The Royal Academy in London and studied at the Antwerp Academy Of Arts for two years studying under Charles Verlat. He was often commissioned to paint and had his subsequent efforts purchased by such people as Lord Charles Beresford.

Towards the end of his life Hemy left the North East and settled in Ryde, the largest town on the Isle Of Wight where he died on 3 April 1937, ironically a month before Sunderland won the FA Cup for the first time. One of his sisters, Annie, also died in the same year.

History has left Thomas Marie Madawaska Hemy pretty much a forgotten man, but not in Sunderland. His footballing masterpiece and his legacy live on.

One thought on “Thomas Marie Madawaska Hemy And The Hemy Painting”