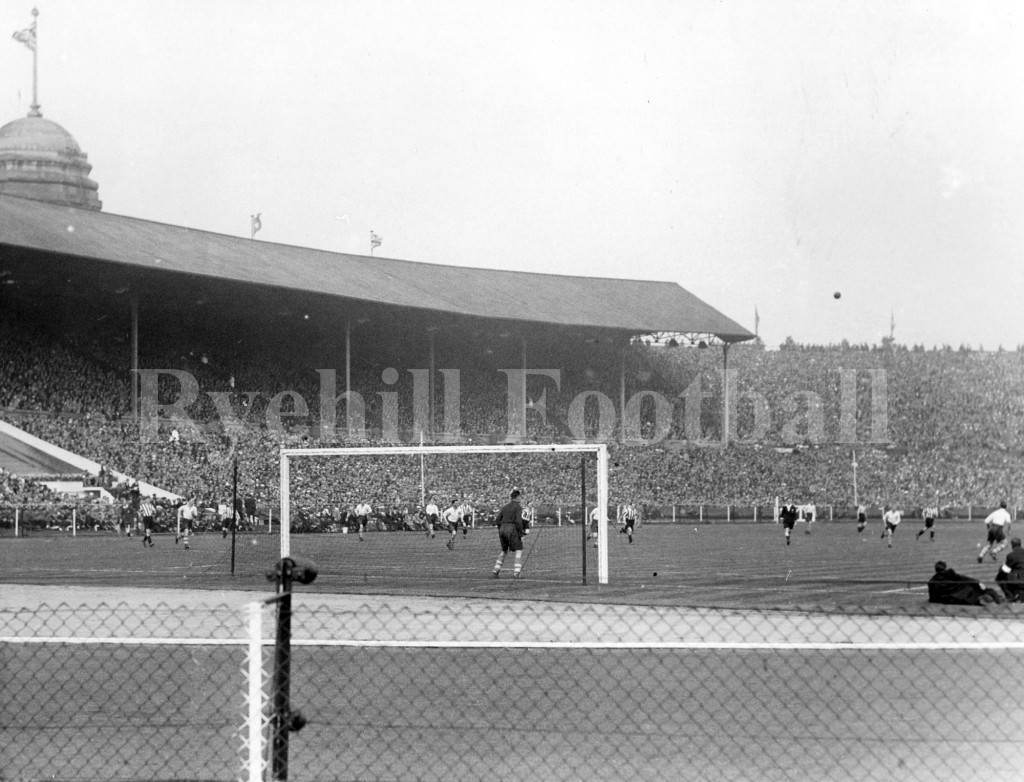 Panoramic view of the 1937 FA Cup Final in progress

There has yet to be a classic Wembley. Perhaps there never will be. The importance of the occasion, the keenness of the players and the human element are against men providing that exhibition of the game critical supporters expect. But anyone who was at Wembley for this game partisan or otherwise who was not thrilled by the final, did not deserve a ticket with many genuine football enthusiasts being denied the privilege of seeing the seasons showpiece match. A perfect day for football with four goals and until the last 15 minutes the result uncertain. To Sunderland supporters, after the 1st half, it was a joyful experience. To the Sunderland players an ordeal perhaps until they had taken the lead but afterwards a feeling of triumph and exaltation.

No feeling of matter of fact acceptance of victory when the final whistle blew but healthy unrestrained delight as shown by the way Duns and Gorman ran into mutual embrace and in the desire of all to shake hands with somebody. Preston for one reason or another were popular favourites for the final perhaps on the strength of their semi-final display so their disappointment with the result was all the greater. They took their defeat well although they felt sore about Sunderland’s 1st goal. In their view Gurney was offside when he headed through and this view was shared by others although they should have noticed when Gurney scored and not when the ball was in the net. 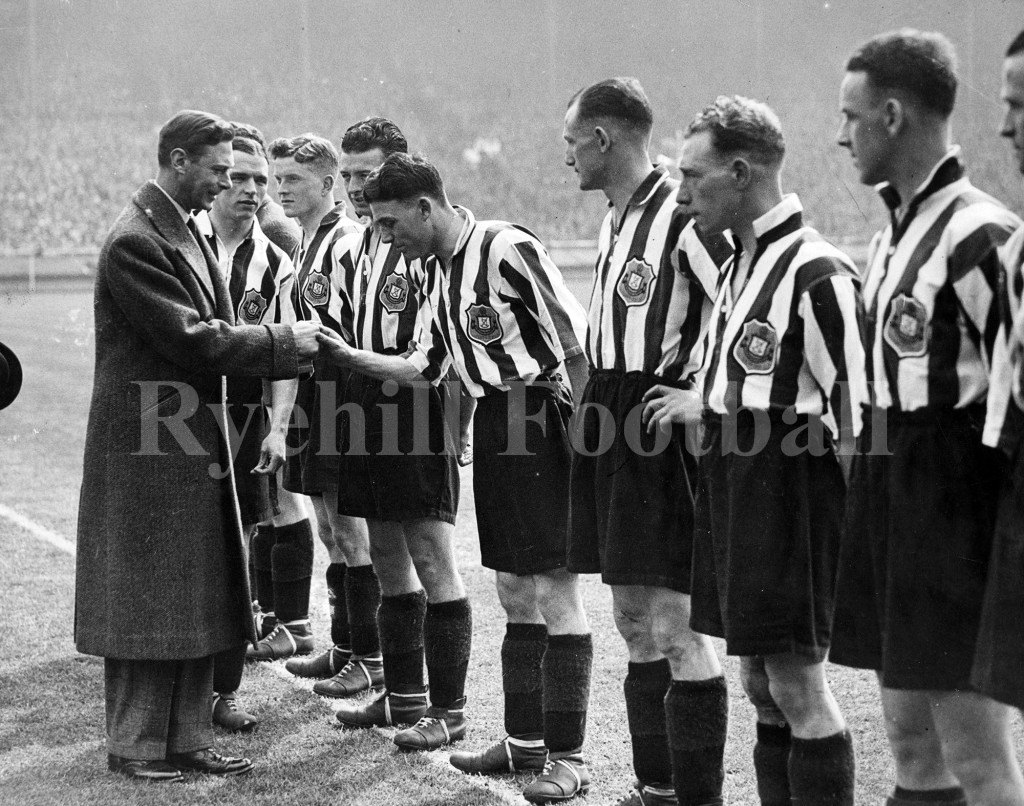 The Sunderland players meet the King before the game

The centre forward was played onside and the referee was well placed to see what happened. Neither Frank O’Donnell’s trick of placing the ball for a free kick or the North End protests carried any weight with Mr Rudd whose handling of the game throughout was excellent. He awarded 20 free kicks the majority for technical fouls but 2 against Sunderland were rather serious and Johnston was seemingly spoken to when he brought F O’Donnell down after he had beaten the centre half. This foul may have influenced the result for had O’Donnell been allowed to get through North End could have been 2 goals ahead at halftime instead of one.

It was very much a game of two halves. In the 1st half Preston, quicker on the ball and moving well were a confident side. Only the work of the Sunderland defence, the better of the two on the play, delayed what seemed to be the inevitable goal until the 38th minute. The 2nd half was quite a different story. Sunderland’s wing halves found their best attacking form and the forwards kept the ball moving to make marking difficult. By bringing Burbanks into the game they exposed Preston’s weakness, a lack of pace in getting across to determined wing men following up a running ball. Duns had given Beattie an uncomfortable time in the early part of the 1st half  but Gallimore had more to contend with on the other flank after the break.

Sunderland worked up speed, made the game safe and then rested on their laurels. This enabled Preston to gain the initiative but the 3rd goal had taken the sting out of them. Even with all the interchanging of position and scheming to draw the Sunderland defence to the wings they could not get F O’Donnell clear and make no mistake about it he was always the real danger to Sunderland. Johnston has never faced a more difficult proposition. As in many other matches this season the Sunderland wing halves and Thomson in particular were the men to change the run of play. Their forcing work in the 2nd half and feeding of the left side of the attack made it a five point one. With Gallacher scheming and Gurney distracting it upset Preston’s methodical marking. 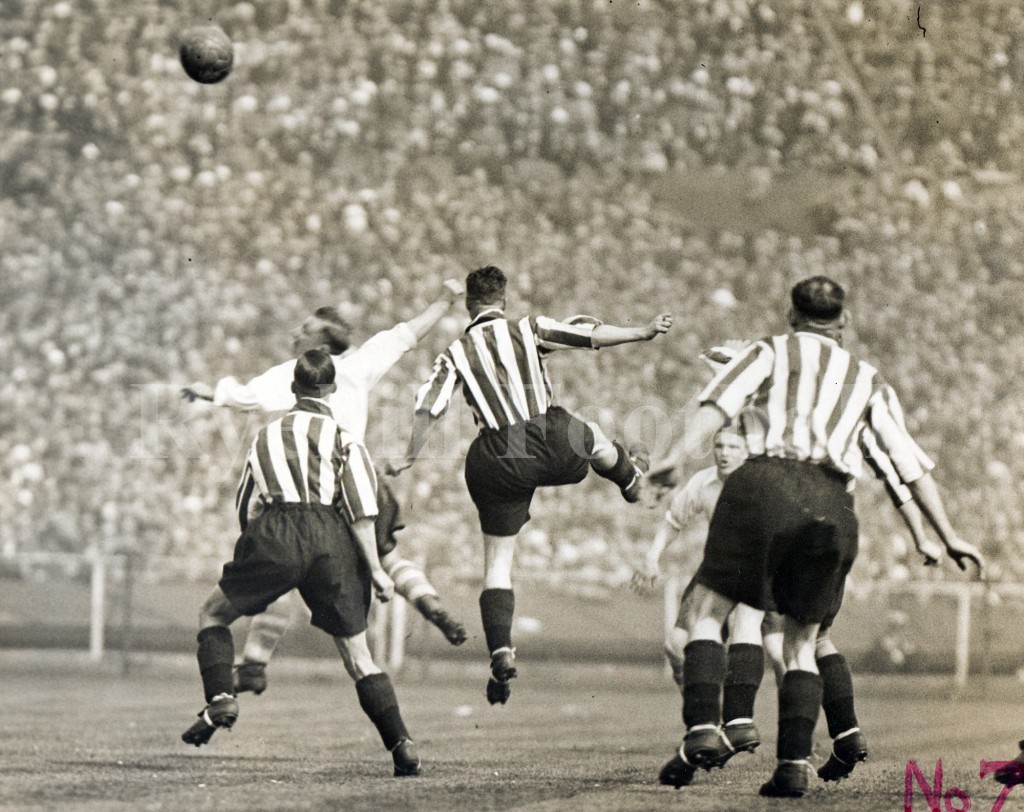 Match action;  Bill Shankly who would become a Liverpool icon is seen in picture playing for PNE

Sunderland’s three goals all came from the left side yet Carter had a hand in two of them! How did he get there? Partly because he is accustomed to covering both inside positions and partly because he wanted to get away from the close marking of Milne who had been his shadow in the 1st half. If Sunderland planned to lull Preston onto a false sense of security by neglecting the left wing they certainly succeeded for Burbanks properly utilised gave North End a heap of trouble after the interval. Practically every time he was on the ball difficulties were created for the Preston defence. His skilfully placed corner kicks swung in and out like a bowling delivery and had backs and centre half in two minds.

They did not know whether to go for the ball or hold back for the in swinger. Duns shirked nothing going all out in running for any ball and some of his cutback crosses were very good. Gorman has not played a more useful game for Sunderland and if  Mapson did not always hold the ball when he went for it the youngster kept his head. Burns could not in any way be blamed for Preston’s defeat. The flaw was in the full backs as already referred to. Tremelling tired because of this and despite the fine work of Milne with his tremendous long throws Preston lacked Sunderland’s wing half balance.

The cleverness of the forwards individually called for accurate positioning and for most of the 1st half it was there but once lost the attack became disjointed and too much depended on F O’Donnell. Though Preston looked the more dangerous Sunderland had first chance of scoring when Gurney hooked an awkward ball over the bar. North End gave the Wearsiders defence a trying time with Mapson once taking the ball off H O’Donnell’s head before they had scored. Preston’s goal after 38 minutes was cleverly worked starting when Gorman was correctly penalised for a foul. Although Sunderland cleared the ball it came back so quickly the defence was out of position and H O’Donnell and Dougall worked it into the middle to send F O’Donnell clear. 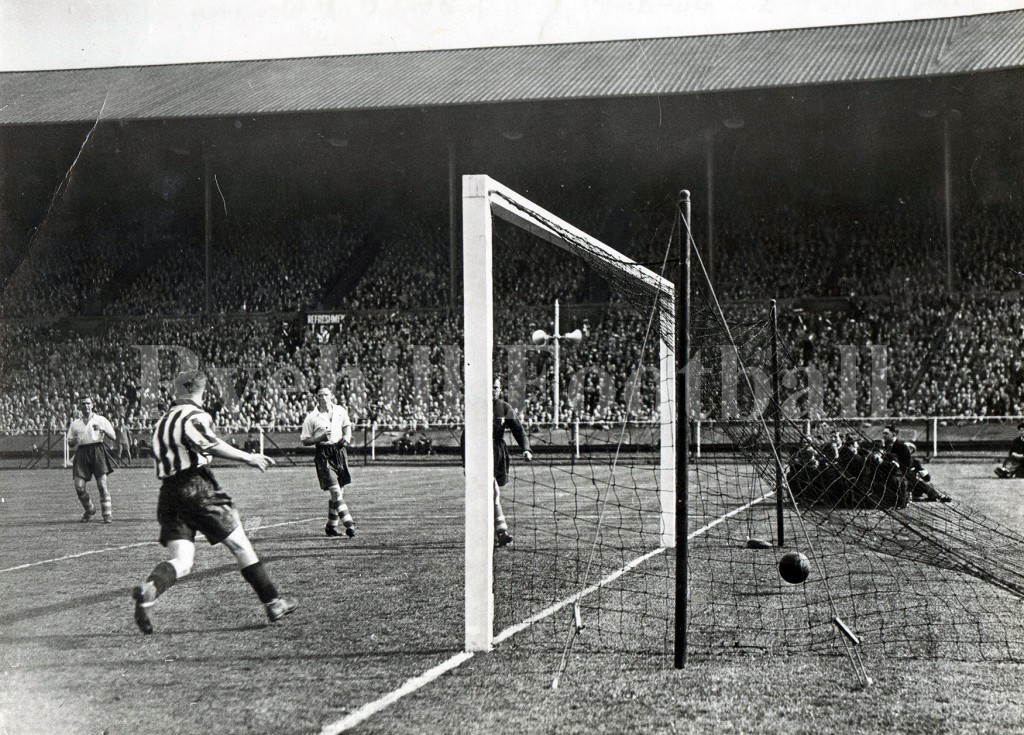 The centre forward ran clear of Johnston and with his favourite right foot scored a master goal. Two minutes later Johnston brought down the centre forward when all seemed lost and before the interval McNab got his leg in the way of a pile driver. As it was Preston’s lead was short lived, only 13 minutes to be exact and when Gurney converted with his head after Carter got to a Burbanks corner, it was all Sunderland for a time. Carter missed a good chance to make it 2-1 before Wearside supporters’ hearts quickened. Mapson had to come out three times to collect deceptive crosses from the left and a Dougall shot barely cleared the bar. Burns made a spectacular punch over from Carter and later ran out to Gurney who shot against the keepers legs.

Then Sunderland took the lead. The ball was lobbed to Gurney and he made a perfect pass for Carter to shoot through after 71 minutes. A lot has been said of Preston’s offside trap but Gurney at any rate was too clever to be caught in it and Preston certainly paid the penalty in this instance. Preston tried hard for an equaliser and though Sunderland, much quicker in the tackle, were given plenty to do there was too much working of the ball which allowed their defence to cover up. Then came Sunderland’s final goal in the 78th minute. It was perfectly worked by Gallacher and Gurney and scored with the fastest shot of the game by Burbanks.

The Sunderland supporters kept up a continuous roar of cheering for they felt the Cup was safe in Roker keeping. Their enthusiasm knew no bounds when Carter went up to receive the Cup from the hands of the Queen. The attendance was 93,495 and receipts were £24,831. 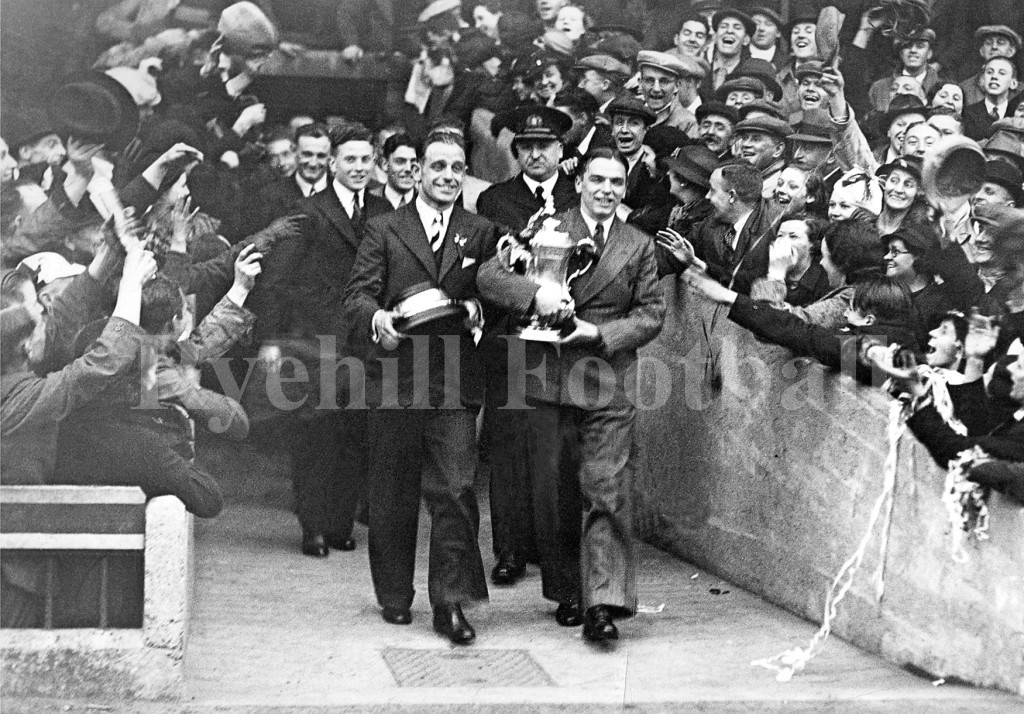 Sunderland players return home and to Roker Park, with the FA Cup – finally its ours!