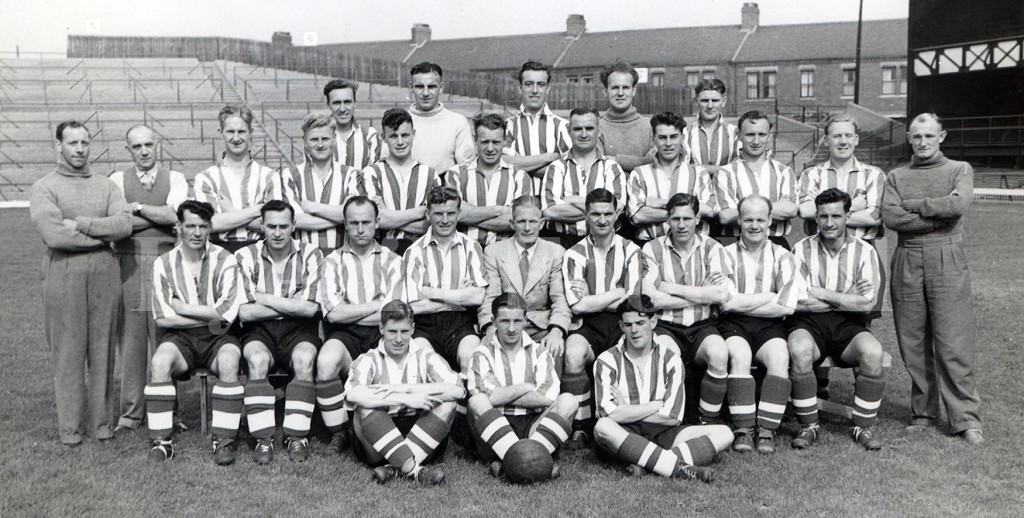 Apart from 1954/55, the 1949/50 season goes down as perhaps Sunderland’s last great season. In ending 3rd we lost out on our 7th English championship by just 1 point. It was the period of The Bank Of England side where we tried to buy success. It would serve as a warning to other clubs in the future, a first relegation less than a decade later, but in search of the holy grail, instant fixes are attractive.

It was also the first time in the clubs illustrious history where aggregate crowds broke through the 1 million barrier. With 1,004,472 fans passing through the turnstiles the average was 47,832. The attendance record for home league games was smashed twice, against Blackpool and then Newcastle United. It was also a personal triumph for Dickie Davis. In scoring 25 league and 3 cup goals he was the last Sunderland player to be top divisional league scorer, up until Kevin Phillips smashed this record some 50 years later.

Funnily enough the season started in poor form, a 2 v 4 defeat at Anfield and a 2 v 2 draw at Turf Moor. By the end of the first 8 games we had been defeated 4 times.

The first victory of the season came in our 3rd game at home to The Arsenal. Shackleton scored after only 4 minutes, and Hudgell scored an own goal whilst attempting to clear a penalty saved by Mapson. All in all it was an eventful 4 v 2 victory. A defeat at Bolton was all the more galling when Shackleton missed an open goal from just 6 yards with the last kick of the match. Two goals in 2 minutes did us at the Baseball Ground; The Bank of England side had now conceded 18 goals in 8 games. 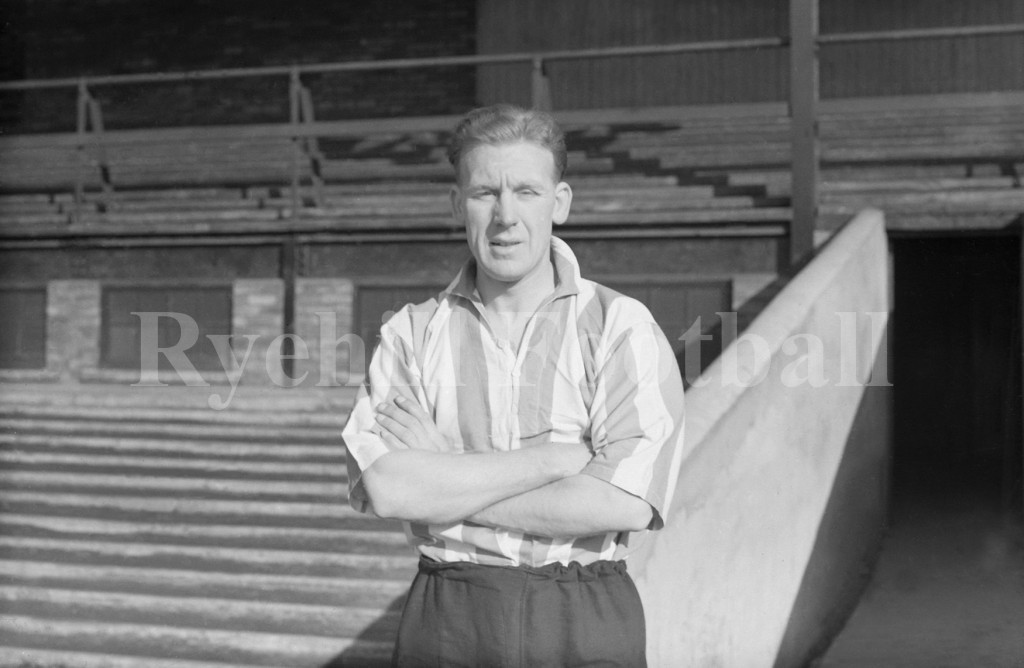 A first visit of West Bromwich to Roker in 11 years was unsuccessful as The Throstles went home pointless after a 1 v 2 defeat, in which Washington born Jackie Stelling played with painful boils on his feet.  By now Manchester United were back at Old Trafford, but Sunderland continued good form against The Red Devils by winning 3 v 1. Some 2,000 Sunderland fans made the trip and had a good journey back. A record crowd of 64,889 witnessed a 1 v 1 draw against Blackpool, but the day was tinged with sadness for Sunderland AFC. Colonel Joe Prior, whom had become a board member in 1919 under Fred Taylor died at his home in Tunstall Lodge during the game. He rose to club chairman in 1939 on the death of Duncan white. Ted Ditchburn succeeded him.

At St James Park Sunderland battled against the odds to hold Newcastle United 2 v 2. Left half Arthur Wright had been injured and was unable to take any further part in the match after just 30 minutes. Down to 10 men for the last hour we played just great.  A home victory over Fulham was made easier by a penalty from Stelling, after a handling offence by Taylor.

Defeated at Maine Road we bounced back with a home defeat of The Addicks, Sam Bartram the 15 year Charlton Athletic goal minder and ex Boldon Colliery lad making a bad error of judgment. A defeat at Villa Park then saw our roller coaster in full swing as we beat Wolves on Wearside. Two draws against Portsmouth and Huddersfield meant that we were handily placed in the league. The latter game had seen Watson missing, due to an injury picked up on international duty, and also Arthur Wright who had a boil on his leg.

We then travelled to Goodison Park on 10 December and won 2 v 0, our first success on Toffees soil since the war. A Merseyside double was completed in the 3 v 2 win over Liverpool, with Ivor Broadis deputy Kirtley scoring the winner against the then league leaders.  Our poor post war run at Highbury continued as we were routed 0 v 5 by The Arsenal. Since the war we had gained just one point at the home of The Gunners.  It was now Boxing Day and we decided to give the Roker Roar a present with the 3 v 0 defeat of Stoke city, but the next day in the return we folded 1 v 2. The New Year went out with a bang on 31 December with the 2 v 0 defeat of Bolton Wanderers, Lofthouse and all.

7 January and the FA Cup was our first game of the year, and the 6 v 0 rout of Huddersfield Town was a personal nightmare for The Terriers 6ft, Blyth born goalkeeper Harry Mills. Davis on 8, Broadis after 10 and 12, Shack on 25, made it 4 before he knew what had hit him.  Our cup form spilled over into the league as we defeated Birmingham at St Andrews and demolished Derby County 6 v 1 on Wearside. The former game had been watched by Scottish selector McKinnon from Perth, casting an eye over Sunderland’s Wright. The Rams pummeling saw Davis hit a hat trick, his first goal coming after just 2 minutes. Powell got County’s consolation three minutes into the second half.  The next round of the FA Cup was at White Hart Lane, and with Sunderland in good form 15,000 made the long journey from Wearside. In front of 70,000 people we were wiped out 1 v 5, although Davis had surprisingly given us the lead after only 15 minutes. Three Spurs goals in a 19 minute second half spell had us reeling. 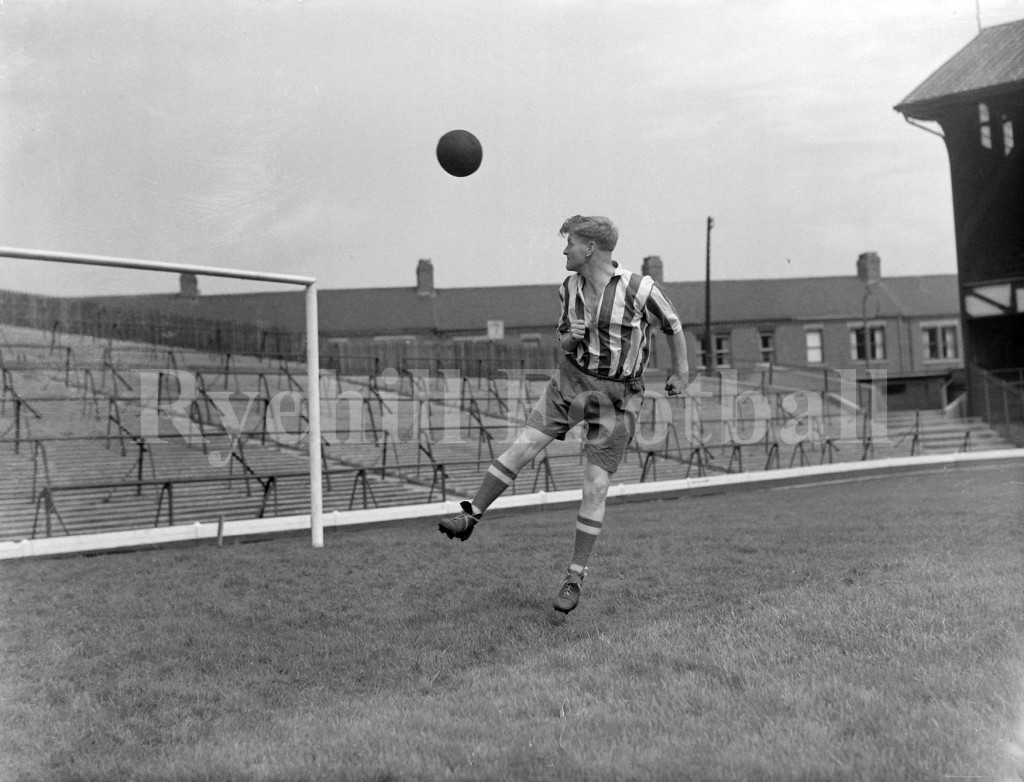 On 4 February we gained our first double of the season against West Bromwich at The Hawthorns, and then we played a friendly draw with Motherwell. The latter 11 February fixture was the first visit from a side North of the Border since the war and drew a crowd of 27,323. Sunderland’s second biggest gate of the season 63,251 witnessed a fascinating 2 v 2 draw, which saw 19 year old Clempson make his debut for The Red Devils.  A victory at Bloomfield Road courtesy of a Shackleton 25 yard blockbuster that flew past Farm in the Tangerine goal meant the following; with 12 games to play – 7 at home – Sunderland lay third in the table, 3 points behind joint leaders Manchester United and Liverpool. The chase for the title was well and truly on.

We then played brilliantly and put together an unbeaten 7 game run, 4 victories and 3 draws. The derby game with The Magpies on 4 March drew a league record 68,004 to Roker Park. The 2 v 2 draw saw Houghton give the black and whites the lead after 11 minutes, Shack equalised on 27, Taylor restoring the away sides advantage after half an hour. Broadis came to our rescue on 52.  Dickie Davis second hat trick of the season, this time against Wolves gave us victory at Molineux. With both Manchester United and Liverpool defeated on 18 March our 1 v 1 home draw with Portsmouth edged us one point nearer the top.  Two goals down at The Valley, Jackie Stelling gave us a lifeline with a penalty; and with just 3 minutes left on the clock Davis poked one home and we had got out of jail. Our first London victory came at Craven Cottage, but it was two games later at home to Manchester City where we really let ourselves down.

Manchester City arrived on Wearside, certain to be relegated, and without an away win all season, stole the points to end our championship hopes. Trautmann the ex German prisoner of war was the hero for city as he saved a twice taken Stelling penalty.  We knew that the game was definitely up at Leeds Road when Huddersfield piled on the agony with a victory that ensured the Yorkshire outfits first division status. There were two home games left.  A Tommy Wright hat trick contributed to a 4 v 2 success over Everton, and secured 3rd place with a 4 v 1 rout of Chelsea and with it £330 of talent money, as well as three records:

2.   We provided the divisions leading marksman – Davis with 25 goals

3.   Attendances topped 1 million for the first time in the clubs history

As a holiday for the players Sunderland travelled to Turkey where they played 4 fixtures as follows:

And so the 1940’s ended. The next decade would be perhaps the most significant in the history of the club. 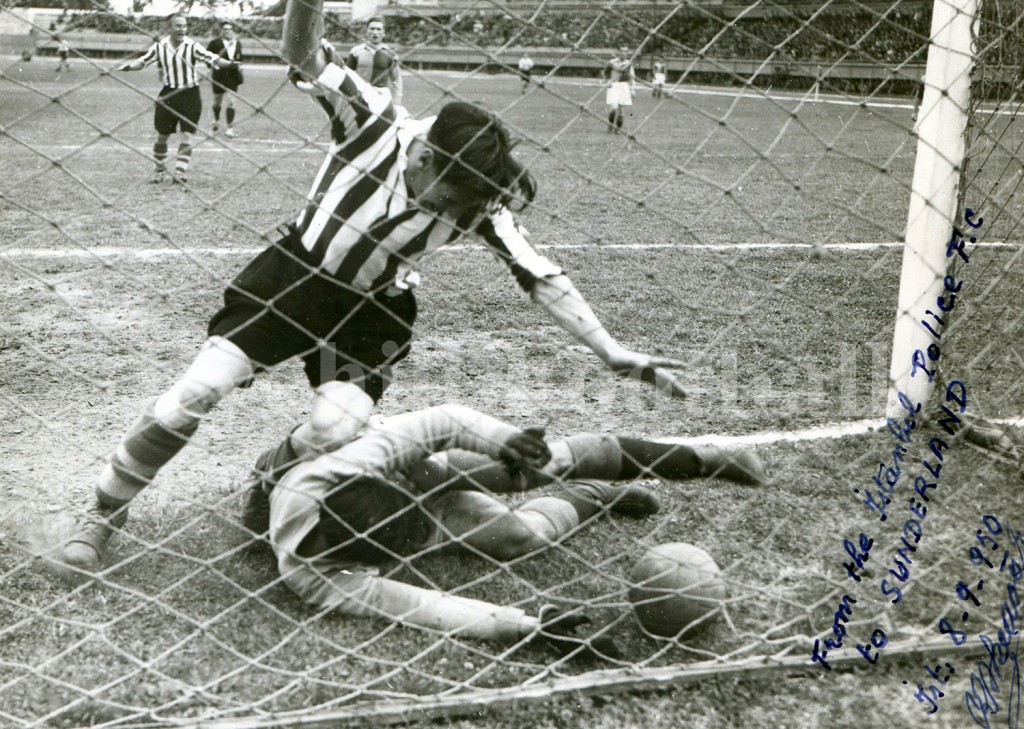