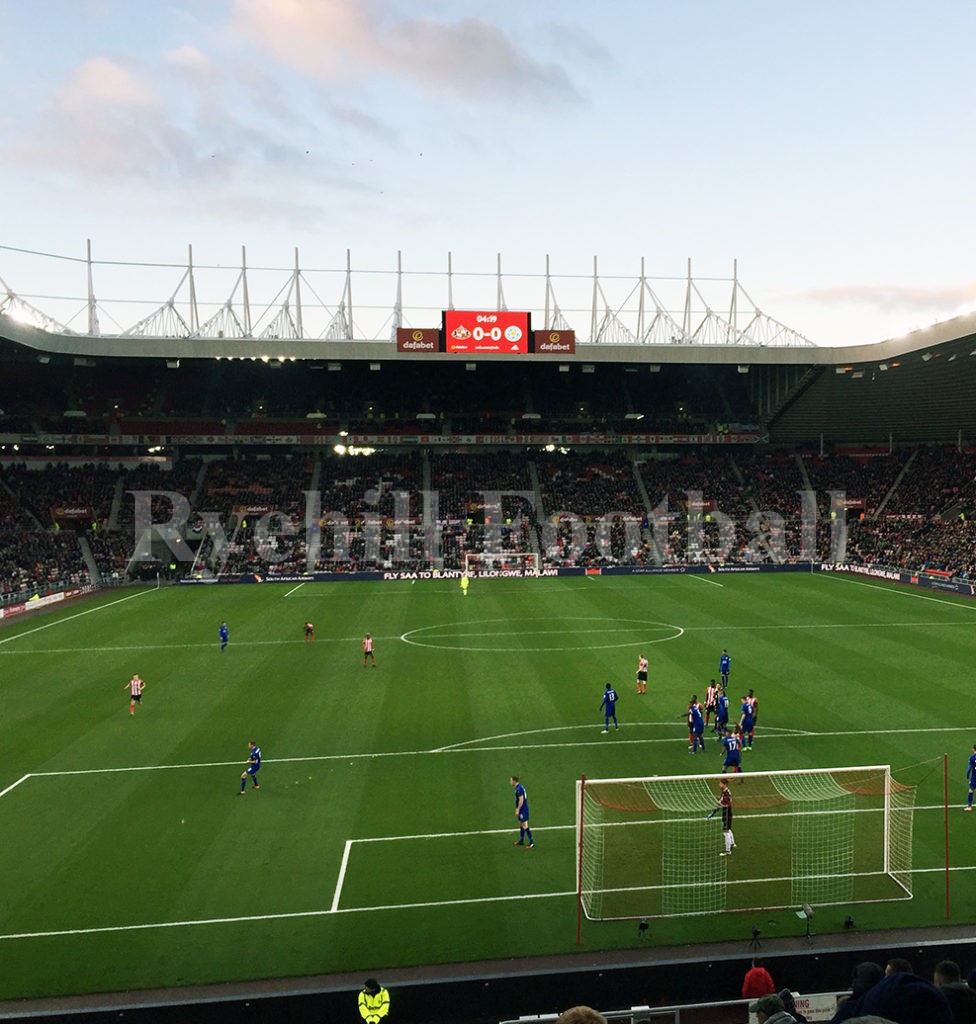 Sunderland AFC made it 3 wins out of the last 4 games as they deservedly won this end to end and never boring encounter with the current Premier League champions, Leicester City, who in truth  looked  a pale shadow of the team they were last year. Although always dangerous on the break The Foxes deservedly lost to give the Black Cats the 3 points to lift us to third from bottom and hopefully on the march out of trouble. It was Leicester’s third defeat in the last five games.

Sunderland took the field with one change from the side that started last week’s rearguard action against Liverpool at Anfield with Papy Djilobodji replacing John O’Shea. We also had a strong looking bench, which signals that some of our lads are coming back from injury. It’ll be nice to see Borini featuring, hopefully soon.

The Lads started brightly and were clearly the more inventive side in the opening 20 minutes. However as is always the case you have to make this superiority count and unfortunately we were not able to do this as Leicester City came into the game with some pacy breaks. However with Vardy having forgotten his shooting boots The Foxes were up against it.

Sunderland had a clear penalty denied when Anichebe was pulled back by Morgan. Referee Marriner was hopeless. I half expected him to reveal a Leicester top underneath his black refs shirt.

At half time though the game was evenly poised at 0 v 0 although Sunderland did enough to be ahead.

Second half and Sunderland made two, pretty much like for like substitutions, with Pienaar and Denayer going off, and replaced by Kirchoff and Seb Larsson, who both had good games. Although the opening exchanges were pretty even Sunderland deservedly took the lead in the 63rd minute when a corner was swung in and Kirchoff rose to head home, although the header was clearly deflected in off  Huth.

Not long after this Sunderland should have had another penalty when van Aanholt was clearly impeded by Simpson.

In the 77th minute Sunderland doubled their lead when good work by Anichebe saw a Watmore effort blocked but who else but Defoe was there to crack the ball home. However Sunderland were caught not long after this and Okazaki scored at The South Stand to reduce the City deficit.

With 7 minutes to go Watmore was stretchered off after what looked like a bad and clumsy tackle by Fuchs who was deservedly booked. This prompted 6 minutes injury time at the end of the game where Jordan Pickford saved us with a cracking save right at the death.

Man of the match? For me it was Anichebe. Strong as an ox out on the wing no one was getting the ball off him today and he is growing into his role as each game goes by. Well done Victor, a brilliant display.

Reports of Leicester fans throwing bottles over the top at The North Stand at the Sunderland fans. At least they turned up for once……

Today’s performance merited the win. Despite winning against Hull last time we were at home we gave away a few good opportunities, but I thought we were much more solid at the back and looked much better on the attack.

We looked really good in the opening 25-30 minutes, we were picking out passes and really tested their defence.

We’ve got three wins out of four now and we need to keep the momentum going now.

I was scratching my head at half time wondering how we were going into the break at 0-0. We had caused Leicester lots of problems down the left hand side but we kept our cool and remained patient for the moment to come; we were very much in control.

There were a couple of decisions that didn’t go for us today and they could have cost us, thankfully they didn’t. The other thing was the injury to Duncan Watmore, it looks a bad one and we’re going to have to assess it.

We’ve not scored from a set piece this season so I was pleased to see Jan [Kirchhoff] get to the ball for our first goal. It was as much about the delivery and getting the ball in the right position and we know Seb [Larsson] is good at that.

We’re not going to get carried away, we’re rebuilding at the moment and hopefully the winning feeling will become more regular for us.

Thanks for your support,