This article appeared in the Football Echo of 5th October 1929

A Long Line of Goalkeepers; Stories of “Teddy” Doig Recalled 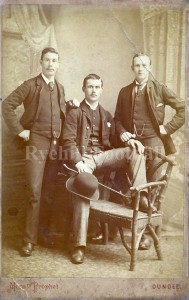 SUNDERLAND have had a line of famous goalkeepers almost without break from the far off days of the “Team of All the Talents,” so styled by the late William McGregor, the founder of the Football League.

The late “Teddy” Doig started that long line.  In his hey day Teddy Doig never got more than £3 10s per week.  What a contrast to-day.  I admit, of course, that times and cost of living are altogether different, but Doig was on a par with Sam Hardy, of English International fame, Ted Taylor, and Scott, the greatest goalkeeper turned out of the Emerald Isle.  The great Scotsman was one of those persons who thought it best to employ his hours at work when not goalkeeping, and for many years, in fact until he left Liverpool, he was a storekeeper with Messrs J. L. Thompson.

There are many amusing stories about the man who was so dear to the hearts of Sunderland enthusiasts of three decades ago.  I recall as a boy how we used to give him a shout of “good old Teddy” as he came along towards his home in Forster Street, and how he used to wave a hand in cheery recognition.  “Teddy” was reputed to be very “close” – that is no new imputation against a Scot.  In those far off days benefits were given on different lines to the present time.  They used to get a match and the player had to see to the sale of his own tickets.  The more sold the more money he got.  But then gates were not like the present gates.  In those days the Sunderland team used to leave for its away matches from Monkwearmouth Station and said Doig to the stationmaster “Will you buy a ticket for my benefit?” The railway official handed over the sixpence and remarked that he would not be able to get to the match.  In a moment our famous goalkeeper had placed the ticket back in his pocket with the remark “I can sell it to someone else.” But he pocketed the sixpence.

It was the usual custom in Doig’s day for each player to get a half-bottle of red or white wine on away journeys.  Doig usually put his straight into his bag, so that he and his wife could share it on a Sunday with dinner.

One Saturday on the return journey two of the Sunderland players (1 fancy Billy Hogg was one of them) extracted the bottle, polished off the contents and filled the bottle with water.  What “Teddy” said on the Sunday is not recorded, but he was round at the Roker Park ground on the Monday armed with a carving-knife, and “Billy” Williams had to smooth away the trouble which was likely to arise in Doig’s anger. 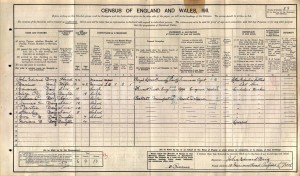 Doig had the distinction of being, to use a Harry Lauder expression, “as bald as ma stick,” and the greatest fear of his life was that his cap should come off in the course of a match.  I saw this happen once, and if my memory has not played me false it was during the course of a Good Friday match against Glasgow Celtic, a day when a wee custodian named McIvor was in Celtic’s goal.  “Teddy” promptly forsook his goal and tore up the field to recover his “bonnet,” looking very red in the face.  He had another distinction; in fact he had two more.  One was that he caused to be recorded the only instance in First League football of a club losing two points for playing an ineligible player, there being a bungle over his coming to Sunderland after playing a League game for Blackburn Rovers.  The other was that he is probably the only goalkeeper beaten by the goalkeeper on the opposing side other than from a penalty kick.  Williams, the Manchester City goalkeeper of that day took a goal kick and the wind carried it right into the Sunderland goal.  Doig touched it but into the net it went.

(see image at top of page which shows Doig  – on the right – with two of his Arbroath team mates and a rare shot of him without a cap!) 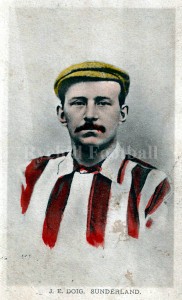 After Doig’s departure, among the good goalkeepers we had at Roker may be included “Ike” Webb (whom I still occasionally see at Birmingham), Tom S. Rowlandson, R. G. Brebner, and the one and only Dick Roose, all of them amateurs excepting Webb.  Butler who was in the side that won the Championship and reached the final of the English Cup in the season 191213, was a very sound rather than a brilliant ‘keeper.  There were two Andersons (one for whom Mr. Kyle had to borrow a couple of “fivers” to complete the deal of a double transfer when he could not get one player without taking two) who were fairly good; Ward who could be brilliant but was very variable.  Then in post-War days we have had, among others, Leslie Scott, the only local-born keeper to rise to any heights with Sunderland; Jimmy Dempster, rather featherbrained and too pugilistic, but brilliant at times; Tommy Allan, who became a star with Southampton, and was lost to Sunderland when Mr. Kyle went on his Canadian trip, as the Football League took Allan’s word that he had not been offered an engagement; and McInroy, Bell, and Robinson, the latter of whom has yet to be heard of in, first-class football.

Albert McInroy is undoubtedly the best find among Sunderland’s post-War goalkeepers but experts say young Bobby Robinson will be “it” later.  Robert Kyle was himself a goalkeeper in his playing days at Belfast, and that probably had something to do with his fine knowledge of a goalkeeper’s make up.  To my mind no secretary in English football during the last 25 years has signed better custodians for a mere signing-on fee than the late Sunderland secretary.

This article appeared in the Football Echo of 5th October 1929.