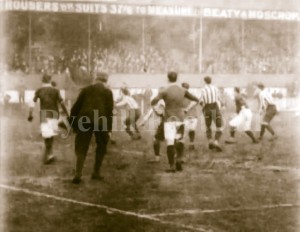 Sunderland did what was expected of them in this return match with Middlesbrough and secured the points by a decisive margin. Grand weather favoured the game with the clear air undisturbed by any wind. The sun on a previously frost bound pitch softened the top and it looked likely to cut up and it was also on the greasy side. Both teams made changes with Barrie replacing McAllister at centre half for Sunderland and Boro had Suddick at inside right in place of Gettins. Atherton went to outside right.

The crowd of over 15,000 saw a sensational start. Middlesbrough carried the ball straight into home territory but they were dislodged at once and a good combined move by Craggs and Bridgett quickly took play to the other end. Amid tremendous excitement Gemmell scored with a couple of minutes of the start. As soon as the ball was kicked off Sunderland went at it again with rare dash and Williamson was given a couple more shots to deal with. He was beaten for a 2nd time in the 7th minute again by Gemmell.

There was a terrific bombardment of the Boro goal which culminated with Gemmell dashing the ball through into the net with the custodian apparently nonplussed by the speed of Gemmell’s movement. Middlesbrough managed to get some sort of a look in after 20 minutes play but compared with the rasping onslaughts that had been made on their goal the visitors attacks were feeble. Jones made a creditable attempt to pull a goal back but Doig saved coolly. A minute later and the Boro forwards put together their best move of the game so far.

They passed the ball cleverly until it reached Brown who was perfectly placed in front of goal. Before he could steady himself for a shot however he was robbed by McCombie. In the later stages of the half both sides tried hard to score and there were some exciting melees at both ends. Sunderland were doing by far the greater proportion of the attacking and it was in Boro territory where the real aggression was located. Sunderland were the better team on all points and the 2-0 score at halftime did not reflect the great difference in the respective display’s.

After halftime Sunderland mounted a rush for the visitor’s goal and Hogg was badly at fault when failing to convert from a good position. The subsequent play contained much long distance shooting with the best effort coming from Craggs. The half was still young when some of the most terrific bombardments of the game were directed against the Boro goal. Buckle banged in a magnificent shot that Williamson saved superbly to loud cheers and then Gemmell shot wide.

In the 65th minute Buckle and Hogg cooperated in a nice little run that ended with Hogg sending the ball flying into the net for Sunderland’s 3rd goal. For the rest of the game both goals were menaced occasionally and each custodian cheered for the splendid style in which they kept their goal intact. Then 3 minutes from the close the Boro right wing got the ball and Suddick slipped past the full backs to shoot with great precision past the advancing Doig and into the net. Sunderland appealed in vain for offside.

Though not a great game it provided interesting sport for the most part and some of the incidents were exciting, indeed sensational in character. It was however too one-sided to have a sustained thrill. Sunderland had things pretty much their own way for a good while after the start and had Middlesbrough not staged a great revival the encounter would have been a dreary procession of goal scoring against them. They were thoroughly outclassed in the early stages but once they got their act together they gave a fairly creditable account of themselves.

In the latter part of the 1st half and for most of the 2nd Middlesbrough kept Doig busy. Overall however Sunderland were easily the better team and the wonder is that the margin of victory was not bigger. Amongst the home forwards Buckle played a finished game and Gemmell was the liveliest forward on the field. Certainly the left wing was more effective than the right. Hogg in the centre was in good but not brilliant form. The halfbacks were powerful with Barries return not detrimental in any way to the middle line.

The defence did all that was required of it. On the Middlesbrough side Brown was rather poor at centre forward with Goodson the pick of the line.  Compared to the Sunderland vanguard that of the visitors was decidedly moderate and the same is true of the halfbacks. Hogg was the reliable full back. Williamson although beaten 3 times made many marvellous saves during the course of the game.