Ryehill Football takes a look at one of Italy’s most famous football teams and reflects on their trials and tribulations. Poignant given the events of the last few days and the tragedy that befell the Brazilian club Chapecoense.  Through adversity comes strength. 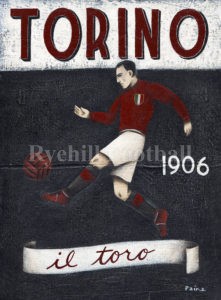 Torino; The Club That Wouldn’t Die

In 1731 the Basilica of Superga, commemorating the Italian Army’s defeat of the French at the Battle Of Turin, was completed. The church stands at the top of Superga Hill overlooking Turin and houses many of the tombs of the kings of the House of Savoy.

Superga is also the site and memorial to the all conquering Torino football team who on 4 May 1949 were returning home from a friendly match in Lisbon in poor weather. Low cloud and poor visibility were given as contributing factors that led to the Fiat G212 plane crashing into the base of the Basilica killing all of the 31 occupants instantly.

The subsequent funeral witnessed 1 million people lining the streets of Turin to pay homage. The crash severely weakened the Italian national team that contained 10 Torino players and it left the club’s Primavera, youth team, to play out the last 4 games of the 1948/49 league season, a move reciprocated by their opponents. Torino subsequently and incredibly won the Italian League title but the Superga tragedy brought to an end their era of domination of Italian club football, a one that had witnessed 4 successive league titles.

As a postscript to this story; one of the victims at Superga was Valentino Mazzola and he had a son who at that time was just 6 years old. Sandro Mazzola would grow to play professional football gracing the shirt of Internazionale over 400 times and he featured in the iconic 1970 World Cup final for Italy against the great Brazilians, arguably the greatest football team ever to grace a football field.

Football Club Torino was founded in December 1906 at a local brewery. It was an amalgamation of disaffected Juventus supporters who did not agree with the concept of professionalism at their club and Football Club Torinese. Although the clubs first match against Pro Vercelli may be considered of little significance in the wider world of football, a picture taken of the Torino team that day includes a 20 year old Vittorio Pozzo the man who would ultimately lead Italy to their 1934 and 1938 world cup triumphs. Prior to that he would manage Torino.

Whilst the tragedy of Superga would in time and to a degree fade as Torino and its fanatical fans resumed a normal football life bad luck was never far from the club and it struck again in 1964 when Luigi Meroni, nicknamed the Granata Butterfly, was knocked down and killed after a match against Sampdoria. It turned out that the driver of the car was the man who would become Torino president in 2000, Attilio Romero.

In 1976 Torino were Italian champions for the 7th time but celebrations were marred when a few months later their newly retired player Giorgio Ferrini died of an aneurysm.

Relegation and economic difficulties then ensued until it reached a nadir at the end of the 2004/05 season when the club was declared bankrupt. However it quickly reformed and took on all of the rights and title of the old association football club.

The club currently plays its games at the Stadio Olympico Grande Torino in the Santa Rita district of Turin, a venue they shared with arch rivals Juventus until 2011.

Whether it be bankruptcy or overwhelming tragedy Torino Football Club has survived to tell the tale and is still very much with us today.

Torino is the club that will not die.

Thanks to football artist and friend of Ryehill Football, Paine Proffitt, for the artwork.